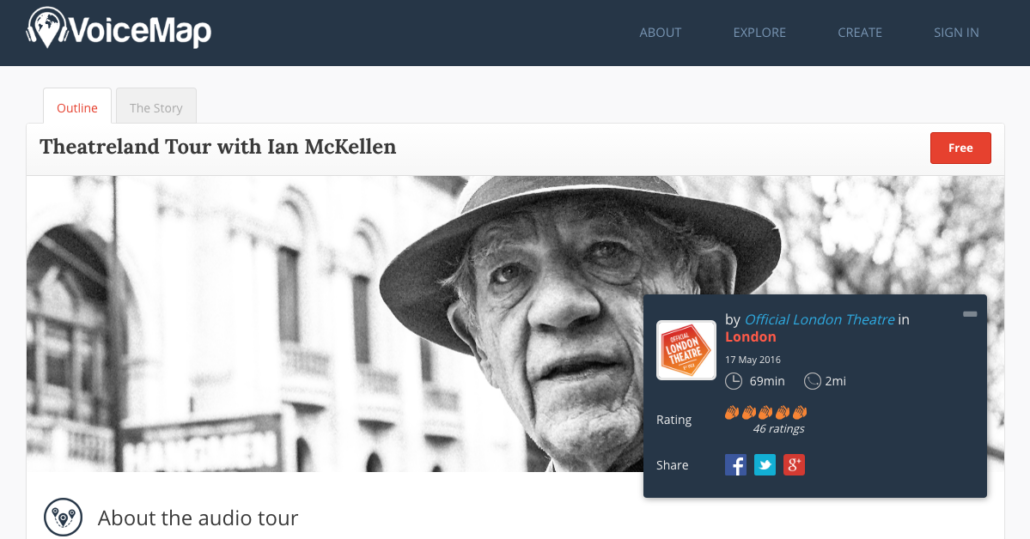 Without a doubt my favorite thing to do in London is to see a show. I do it almost every time I’m there, even if it’s even for just a night (yes, I usually take a five-minute jetlag catnap in the middle). In the last two months, Natalie and I have seen “The Lion King” and “People, Places and Things,” and both were amazing. The latter isn’t for kids.

My second favorite thing to do in London is to walk around the city, so when I learned about this app—a free GPS-guided audio tour of London’s West End by legendary actor Sir Ian McKellen—I couldn’t wait to share it. The GPS audio walk is available as a free download (for Android and iOS) through global audio tour app VoiceMap. The tour gives both locals and visitors the unique opportunity to see the West End through McKellen’s eyes, and includes stories from his 52-year-long career on the stage.

This Theatreland tour was produced by Official London Theatre—a brand under the not-for-profit Society of London Theatre—and is part of the organization’s efforts to promote theatre-going. The app uses GPS to play audio automatically, with McKellen directing you through your earphones along the way. Just download the tour with Wi-Fi before going on it and you can then switch to airplane mode so don’t use data. Don’t forget your earbuds!

McKellen invites listeners to play the lead role in a one-of-a-kind “performance,” with him as director. The streets of London’s theatre district are the stage, he says, and occasionally McKellen cracks a joke about the listener’s brilliant stage presence, or assigns them an acting test. The tour weaves together tales of theatre’s rich history with McKellen’s own memories, from his West End debut in 1964 at the Duke of York Theatre, to flirting from the art deco windows of the Fortune Theatre in the 1970s, and battling a child while playing Captain Hook—in high heels—in the 1990s.

The tour conveniently starts and ends at the TKTS ticket booth on Leicester Square and lasts for one hour. It goes on a long circular walk passing several significant landmarks including Bow Street Magistrates Court, where Oscar Wilde was sentenced to hard labor for “indecent acts,” and the Savoy Theatre, which was the first public building in the world to be lit entirely by electric lights.

Unlike traditional walking tours the app allows participants to explore at their own pace, perhaps stopping for a drink or two along the way.. McKellen recommends the Coal Hole pub where Gilbert and Sullivan performed during Edwardian times.

How to use the Theatreland Audiot Tour with Sir Ian McKellan through VoiceMap: