Have You Ever Dreamt of Living in Italy? 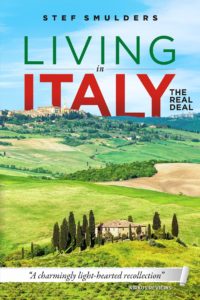 I think after the book/movie Under a Tuscan Sun, a lot of people dreamt of packing it all up and moving to Italy. Well, the book “Living in Italy: The Real Deal” provides real, useful info to make it happen (or not). The book features sixty witty short stories about the Dutch author’s adventures in Italy.

Stef Smulders and his husband Nico are two adventurous Dutch men who decided to start a new life in Italy. In 2008 they made the big move with their dog Saar and set up Bed and Breakfast Villa I Due Padroni in the beautiful wine region of the Oltrepò Pavese to the south of Milan. In 2014 Stef published his first collection of amusing short stories (in Dutch) about daily life among the Italians, entitled “Italiaanse Toestanden – Leven en overleven in Italie.” It was so well-received that he published a follow-up volume of humorous anecdotes in 2016. The third issue, “Living in Italy: the Real Deal,” is translated into English.

As you will see from the book a lot of hurdles had to be overcome before the first guests could be accommodated. In 2014 Stef reports about his adventures in buying and reconstructing the house, obtaining a tax number and a bank account, registering at the commune and at the national health service, importing their car, and a range of other things that lead to a myriad of bureaucratic troubles. These problems were always resolved in a truly Italian fashion, leading to raised Dutch eyebrows and hilarious scenes. As a reader you will encounter a range of characteristic Italians, from sympathetic to villainous, from moving to shameless. Real Italians of flesh and blood, sometimes cliché, sometimes surprisingly original. But always worth encountering.

1 Comment On "Have You Ever Dreamt of Living in Italy?"