Travel Book of the Week: “Backpacking with Dracula” by Leif Pettersen 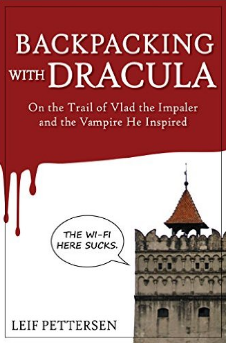 “The undisputed A-lister among Transylvania’s cabaret of supernatural blood-drainers and face-eaters, Count Dracula is both a publicist’s dream and nightmare. Like Donald Trump, despite unremitting horrifying behavior, the public can’t get enough of him even after more than a century of being name-dropped in literature, TV and film.

Little known to most people is that our vampire friend is the namesake of someone with similar PR challenges, Vlad ‘Tepes’ Dracula, the extravagantly mustachioed 15th century prince of Wallachia. Depending on which medieval gossip magazine you read, Tepes was characterized as a brutal tyrant, a hero, a traumatized child who became a psychopath, a passionate leader whose reign brought order to a region in chaos, scourge of the overwhelming forces of the Ottoman Empire and/or a textbook sadist who prolifically impaled tens of thousands of enemies.

“Backpacking with Dracula” is my buddy Leif Pettersen’s “quest to explore fact, legend and fiction (and the copious, delectable gray areas), sifting through the divergent, sometimes fantastic stories about the mercurial prince and modern confusion with the vampire. As [he] peel[s] away these layers, [he’ll] share his accumulated knowledge of modern day Romania, where [he] lived and traveled for a cumulative two years while researching multiple editions of Lonely Planet guidebooks.”

Grab it: Grab a copy of “Backpacking with Dracula” by Leif Pettersen for $8.99 here.