From Amazon: “In the summer of 2010, photographer Brandon Stanton began an ambitious project—to single-handedly create a photographic census of New York City. The photos he took and the accompanying interviews became the blog Humans of New York. In the first three years, his audience steadily grew from a few hundred to over one million. In 2013, his book ‘Humans of New York,’ based on that blog, was published and immediately catapulted to the top of the NY Times Bestseller List. It has appeared on that list for over twenty-five weeks to date. The appeal of HONY has been so great that in the course of the next year Brandon’s following increased tenfold to, now, over 12 million followers on Facebook. In the summer of 2014, the UN chose him to travel around the world on a goodwill mission that had followers meeting people from Iraq to the Ukraine to Mexico City via the photos he took.

Now, Brandon is back with the follow up to Humans of New York that his loyal followers have been waiting for: ‘Humans of New York: Stories.’ Ever since Brandon began interviewing people on the streets of NY, the dialogue he’s had with them has increasingly become as in-depth, intriguing and moving as the photos themselves. Humans of New York: Stories presents a whole new group of humans, complete with stories that delve deeper and surprise with greater candor. Let Brandon Stanton and the people he’s photographed astonish you.”

Grab it: Grab a copy of “Humans of New York: Stories” by Brandon Stanton here. 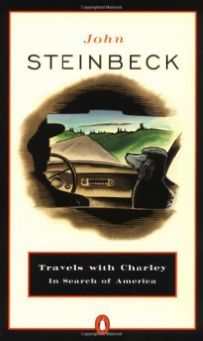 Travel Book of the Week: “Travels With Charley in Search of America” by John Steinbeck

Sadly, I don’t find enough time to read for leisure, but after my buddy Jim Byers (@JimByersTravel) tweeted a few days ago—“Finally, I heartily recommend John Steinbeck’s “Travels With Charley in…