Travel Book of the Week: “On the Plain of Snakes” by Paul Theroux

Paul Theroux, one of the world’s most renowned travel writers, has a new book coming out on October 8, 2019. It’s called “On the Plain of Snakes: A Mexican Journey,” and it’s currently available for pre-order. The book is about Paul’s self-driven journey through Mexico along the entire 1,954 Mexican border and beyond. So far, the reviews have been glowing. For example:

“Paul Theroux is an undisputed master of travel literature. He has traversed Mexico with such dedication that he knows its roads as he knows the lines on the palm of his hand. His curiosity does not recognize borders. Nor is he a stranger among us: he is Don Pablo, a wise man who never stops learning.” 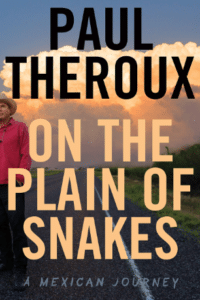 “On the Plain of Snakes: A Mexican Journey” by Paul Theroux ($30 on Amazon)

“Paul Theroux has spent his life crisscrossing the globe in search of the histories and peoples that give life to the places they call home. Now, as immigration debates boil around the world, Theroux has set out to explore a country key to understanding our current discourse: Mexico. Just south of the Arizona border, in the desert region of Sonora, he finds a place brimming with vitality, yet visibly marked by both the US Border Patrol looming to the north and mounting discord from within. With the same humanizing sensibility he employed in Deep South, Theroux stops to talk with residents, visits Zapotec mill workers in the highlands, and attends a Zapatista party meeting, communing with people of all stripes who remain south of the border even as their families brave the journey north.

“From the writer praised for his “curiosity and affection for humanity in all its forms” (New York Times Book Review), On the Plain of Snakes is an exploration of a region in conflict.”