This hilarious book by John Hodgman came out just a couple weeks ago and has already garnered rave reviews. Here are just a few, from celebrities, large publications, etc.:

“I love everything about this hilarious book except the font size.” — Jon Stewart 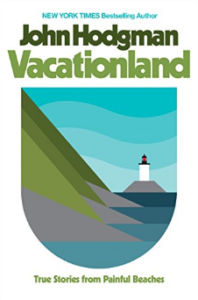 “I am delighted that Vacationland exists, because it will finally prove something to the world that I have known for years: John Hodgman is a seriously great writer. It’s easy to miss this point about John, as his literary talents are often overshadowed by his well-known and much-loved sense of humor. But this is a man whose mind and heart have always been devoted to the craft of writing. These essays demonstrate his rare gift in a volume that is rich with sensitivity, subtly, grace, and—yes, of course— wit. I absolutely love it.” — Elizabeth Gilbert

“Achingly funny . . . Sharp, silly, and sensitive, Vacationland is a literary selfie of a concerned citizen storyteller—one in which the oldest slice of the United States does a little inelegant photobombing.” — NPR

“Reading the book is a particular pleasure . . . Hodgman has a gift for capturing the modes and mores of New England in a way that is wry and true.” — Los Angeles Times

Amazon’s description goes like this: “Although his career as a bestselling author and on The Daily Show with Jon Stewart was founded on fake news and invented facts, in 2016 that routine didn’t seem as funny to John Hodgman anymore. Everyone is doing it now.

Disarmed of falsehood, he was left only with the awful truth: John Hodgman is an older white male monster with bad facial hair, wandering like a privileged Sasquatch through three wildernesses: the hills of Western Massachusetts where he spent much of his youth; the painful beaches of Maine that want to kill him (and some day will); and the metaphoric haunted forest of middle age that connects them.

Vacationland collects these real life wanderings, and through them you learn of the horror of freshwater clams, the evolutionary purpose of the mustache, and which animals to keep as pets and which to kill with traps and poison. There is also some advice on how to react when the people of coastal Maine try to sacrifice you to their strange god.

Though wildly, Hodgmaniacally funny as usual, it is also a poignant and sincere account of one human facing his forties, those years when men in particular must stop pretending to be the children of bright potential they were and settle into the failing bodies of the wiser, weird dads that they are.”

I haven’t read it but I think I’m going to get a copy to give to a loved one for Christmas.