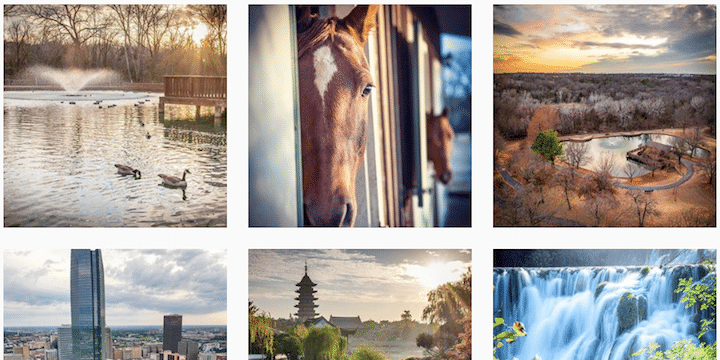 Matt Payne is an Emmy-nominated filmmaker, an award-winning travel photographer and writer, a public speaker, and an adventurer. He takes amazing photos, so it wasn’t surprising to see that he took the grand prize for “Best Overall Instagram Photo and Caption” at SATW’s (Society of American Travel Writers) first-ever social media contest. The contest was designed to reward the most creative Instagram (and Twitter) posts linked to the event. Here’s his winning photo:

Milky Way dancing above the Chihuahua sky. Such a crazy month. Excited to be home.

Here’s more on Matt Payne, direct from the bio from his website:

“Matt spent spring of 2019 storm chasing with Oklahoma’s channel nine storm trackers as part of a new documentary-series called Oklahoma’s Own Originals for Griffin Communications. He is the travel editor for 405 Magazine, the producer of the three part television series Mosaic Oklahoma and has been a contributing writer and/or photographer to National Geographic Traveler, Travel Age West, Explorer Magazine, Apartment Therapy, themanual.com, vagabondish.com, Austin Monthly (digital), San Antonio Magazine (digital), Communities Digital News and many other travel publications. Matt served three years as an adjunct professor at Oklahoma City University and travels the Midwest, inspiring audiences with talks covering a range of topics from travel writing and photography to screenwriting.

“Matt’s awards include a 2018 Emmy nomination for the project OETA Foundation project ‘RARE,’ four prestigious Bill Muster Travel Photography Awards given out by the Society of American Travel Writers, gold medal portfolio winner for SATW’s PhotoQuest competition, the Society of Professional Journalism’s first and third place awards for Magazine photography and the 2018 PBS Special Achievement Development Award for his television show Mosaic Oklahoma. Matt is a member of The Writer’s Guild of America, Society of American Travel Writers where he co-chair or serves on several committees, a regular speaker at deadCenter film festival, a participant in the Oklahoma Conservation Leadership Academy and sits of the board of directors of the Oklahoma City Zoological Society as well as the Moderns board at the Oklahoma Museum of Art. Matt’s Instagram account ‘Matt Payne Travel Photography’ celebrates 14.5k engaged followers on IG, 6k followers on FB and grows daily. He also is the first official brand ambassador for Bedford Camera in Oklahoma City.”

“In 2015, Matt and his wife moved to Oklahoma after 15 years in Los Angeles. There, Matt worked in the film and television business where he wrote episodes of hits shows including Vegas and Defenders for CBS and TNT’s Memphis Beat. He was also part of the staff of the FOX hit 24 and CBS’s Without a Trace. Matt currently lives with his wife, daughter, a dog named Jasper, six horses, two cats, two donkeys, three chickens, two pigs and a rooster named Wayne on a farm outside of Oklahoma City.”