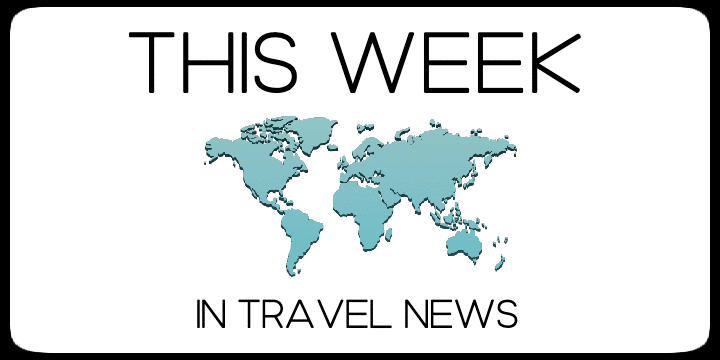 Each week, we round up the biggest and most talked-about travel news. Here’s what’s happening in the world of travel this week…

I thought for sure that by the time the stay-at-home order in California was lifted I would’ve accomplished so much. All the stories I’d wanted to write would be written, my closet and photographs would be organized, my basement would be decluttered, the TV shows I’ve wanted to watch would be watched, and I’d have a six-pack from working out so much. Sadly, none of that happened. To me, the time went faster and even though days got longer thanks to the sunlight they rapidly became shorter.

The one thing I did accomplish that was on my to-do list was to start regular video interviews with big-time travelers. So far as part of my “39 Travel Questions” I’ve interviewed Andrew McCarthy (actor/director), Josh Gates (host of Expedition Unknown), Jack Maxwell (host of Booze Traveler), Rudy Maxa (Rudy Maxa’s World), Ernest White II (host of the new PBS show Fly Brother), Robert Rose (host of Raw Travel), Darley Newman (host of Darley’s Travels), Leo Laporte (host of The Tech Guy), and Lee Abbamonte (he’s been to every country in the world). Next week I’m interviewing a bunch more so I hope you’ll subscribe to my YouTube channel and set your YouTube notifications so you get notified when new content is loaded!

There’s a lot going on in the travel world right now, so I’ll be editing this post as needed (since it seems things are changing by the minute). Here are this week’s top travel news stories and interesting links—starting with when each state and each country plan to open, which New England state is requiring visitors to quarantine for 14 days, and which cruise company is in trouble…

There was big news in the world of cruising. Carnival Cruises is getting ready to set sail on August 1, while Norwegian Cruise Line sees “substantial doubt” about its future and warns of possible bankruptcy as it seeks to raise $2 billion.

It’s shocking to see how many flights have been cut from LAX, the airport closest to me. If you want to go non-stop over the Atlantic from LAX right now you can only fly to AMS, CDG and LHR. No longer can you fly to Australia or South America. In fact, there’s currently just one flight from the U.S. (San Francisco) to Australia (Sydney) and you have to be Australian to be on it, and when you land you’re escorted to a hotel with guards for 14 nights. The Australian government pays for that part and your three meals a day. A friend of mine is going to experience it firsthand next week and has offered to write a post, so stay tuned.

Running a fever? Air Canada won’t let you board. “Canada’s largest airline will soon be taking the temperatures of would-be travellers boarding their planes, and will not allow adjacent seats to be occupied even among parties travelling together, unless they are required to do so to assist another customer with whom they are travelling.” Children under 14 would qualify as needing assistance, according to the airline.

Per Brian Summers, “United Airlines will now board by rows from back to front, five rows at a time. They will not reference boarding group numbers, their pre-boarding groups will continue without change.” Times are changing. Just a few months ago everyone wanted to get on the plane first to get their bags in the overhead bin. Now everyone wants to be last on the plane and first off. Sitting up front really is worth the extra cost.

Frontier Airlines is offering non-stop flights for just $11 to its Discount Den members. Flights are within the U.S. and must be booked today, May 7.

YYZ is a ghost town. “Toronto Pearson International, plummeting passenger traffic has left normally bustling, frenetic terminals looking like gleaming ghost towns. About 5,000 passengers are moving through the facility each day, down from a normal 130,000, the airport said.”

Berkshire Hathaway CEO Warren Buffett is no longer investing in airline stocks. He said, “The airline business—and I may be wrong and I hope I’m wrong—I think it has changed in a very major way…I don’t know if two or three years from now if as many people will fly as many passenger miles as they did last year.”


Per an email I got, “SmarterTravel.com survived and thrived through 22 years of good times and bad thanks to travelers’ indomitable spirit and curiosity. But due to mass COVID-related layoffs at our parent company TripAdvisor, Smarter Travel Media will be dissolved, and nearly all staff laid off, including the SmarterTravel.com editorial team. Sadly, our last day will be Tuesday, May 5. We’ve been told that the websites in the Smarter Travel Media portfolio (SmarterTravel.com, Jetsetter, Airfarewatchdog, What to Pack, Family Vacation Critic, Booking Buddy, and Oyster) will continue to exist in some form, but at this point, I don’t know more than that.”

Nordstrom, Macy’s, Best Buy, and Gap are reopening stores. Here’s how your shopping experience will change.

In Germany they’re hosting the world’s first drive-in raves where the audience stays in cars and can listen to the DJ’s soundsystem or tune into an internet broadcast of the music.