Want to know how to travel in style, just like the pros? We check in with frequent fliers to find out how often they fly, their favorite destinations and what they never leave home without.

Occupation:   Founder/President, The Jet Set Pets, the luxury travel source for pampered pets on the go.

Residence:  When I’m not traveling, I return to Los Angeles then usually head to San Francisco, where I’m spending more time these days.

Short Bio: Kelly E. Carter is Founder/President of The Jet Set Pets, the luxury travel source for pampered pets on the go. She also serves at the pet travel expert for AOL’s Paw Nation, is a Contributing Editor at Elite Traveler magazine, co-authored New York Times bestseller Come to Win with Venus Williams and is pet parent to Lucy, the world’s most adorable pooch. The bon vivant is an Italian at heart and never met a Bellini she didn’t like.

How often do you fly:  As often as possible.

How many countries have you been to:  More than 40 but not nearly enough.

How many continents have you been to:  Six and counting.

Favorite international city:   It’s so hard to pick just one so I’ll give my top three, in alphabetical order: Cape Town, Florence and Rio de Janeiro.

Least favorite country:  Any that wants to quarantine my dog in order to enter.

Favorite airline:  Every airline that allows pets in cabin.

Favorite international airport:  Zurich because it’s super easy to go outside to walk my dog during a layover and get back through security with plenty of time to spare before my next flight. Every airport should be so efficient. 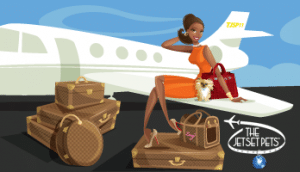 Favorite hotel:  Eden Rock, St. Barths, which not only has incredibly sexy suites but will spoil the heck out of small pets.

Favorite cruise line:  I stay away from cruises but if I did go on one it would be Cunard’s Queen Mary 2 from New York to Southampton because it allows pets to sail too.

Favorite island:  Capri, where I wanted to move but I chose Positano so I could be more mobile.

Favorite fancy restaurant:  Jose Andres’ The Bazaar at SLS Hotel at Beverly Hills. The Cotton Candy Duck Liver, Philly Cheesesteak and Not Your Everyday Caprésé are all orgasmic.

Favorite hole in the wall:  Roscoe’s Chicken and Waffles. I always get the No. 9.

Favorite food:  Anything Italian, including, no make that, especially Bellinis.

Favorite travel movie(s): Roman Holiday, Under the Tuscan Sun and The Talented Mr. Ripley, which may not be a travel movie but I was certainly seduced by Italy and shortly thereafter its release moved to Italy for two years. I envisioned myself as Gwyneth Paltrow’s character in the movie and ended up living in Positano for 15 months. A few months before I left the States, I met Jude Law at the Golden Globes and told him that I was moving to Italy. He made me promise that I would learn to play the saxophone, which he learned how to play for the movie. I promised him but reneged. Sorry Jude.

Favorite travel show(s): I’m a foodie and never watch cooking shows. I want to go to a restaurant. I love fashion but never watched Project Runway. I want to go shopping. I love to travel but don’t watch travel shows. Give me an airplane ticket instead. That being said, I do absolutely love, love, love any of Travel Channel’s 21 series in which I appear: 21 Sexiest Beaches, 21 Sinful Vegas Spots, 21 Sexiest Beach Bars, etc.

Favorite travel book(s):  Bellini for One, which I’m almost finished writing and tells my story of my two-year stay in Italy; Laura Fraser’s An Italian Affair, Peter Mayle’s A Year in Provence, Under the Tuscan Sun by Frances Mayes, Peter Gether’s The Cat Who Went to Paris, The Last Promise by Richard Paul Evans and Halfway to Each Other: How a Year in Italy Brought Our Family Home by Susan Pohlman.

What do you always seem to forget:  Nothing. But once I forgot to take out the trash in my apartment in New York before leaving for an extended trip. I feared roaches and mice partying in my apartment by the time I returned so from JFK I called a posh girlfriend who works at Versace and is equally afraid of New York’s infamous bugs and rodents, asked her to go to my building and take out the trash and arranged for the doorman to let her in. She obliged. Now that’s friendship.

Most embarrassing/worst travel moment: Once at LAX, Delta Air Lines wouldn’t allow me to check in to my flight to Italy that connected through Paris because my dog’s health certificate wasn’t in Italian. We lived in Italy at the time and I flew back and forth often, always using a health certificate in English. I explained this and also that I would clear customs in Paris. Passengers arriving from France to Italy are ushered through because they are both in the European Union. Nothing I said mattered. Finally, I called the Italian Consulate and asked the office to fax a health certificate to my vet and called the vet to ask them to fill out the form and fax it to the airlines. All of this took so long that there was no way I was going to make my flight. Because I didn’t want the next Delta flight through Cincinnati, I was booked on a later non-stop to Paris on Air France but told that Air France wouldn’t accept a faxed health certificate. So I rented a car, drove to my vet’s office to get the health certificate and returned to the airport later that afternoon. Of course, Air France never asked for the health certificate. Very few airlines do. I’ve never forgiven Delta for costing me precious hours in Italy and since then I’ve made sure to have the health certificate in a few languages.

Favorite travel website(s) – besides JohnnyJet.com, of course!: TheJetSetPets.com, of course! On my site, you can find where to get side-by-side massages with your pooch, which luxury hotels have room service pet menus, pet entry regulations to 30 different countries, pet policies for nearly 40 domestic and international airlines, the hottest pet spas and groomers and so much more, including my dog Lucy’s blog about her life as the jet set pet.

Best travel tip: When you check into a hotel room, make sure the previous guest didn’t leave the alarm clock set. If you don’t, I guarantee you will be awakened unnecessarily from a deep sleep at 4 a.m.