Want to know how to travel in style, just like the pros? We check in with frequent fliers on useful resources, favorite destinations and what they never leave home without. 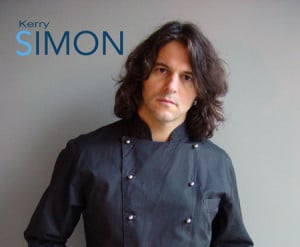 Short Bio: One of the first chefs on the Las Vegas scene, Kerry Simon continues to reinvent himself in the city he calls home. Dubbed the rock-n-roll chef by Rolling Stone magazine, the aspiring musician’s love for cooking did not start right away.

In his late teens, the Chicago native worked at Little Caesars Pizza to save money for an electric guitar. The summer job sparked Simon’s interest in food and late-night recipe testing from Julia Child’s cookbook. At the age of 20 he enrolled in the prestigious Culinary Institute of America in Hyde Park, New York followed by a nearby apprenticeship at Jean Morels’ L’hostellerie Bressane where he learned the basics of French cuisine.

After graduation Simon moved to Manhattan and worked with the city’s culinary legends, including Jean-Jacques Rachou of La Cote Basque and Andre Soltner of Lutece. Seeking a new challenge, he accepted the position of personal chef for John Addey at London’s Canonbury House.

A year later, he returned to New York and to Louis Outier’s now closed Lafayette restaurant in the Drake Hotel.  It was there that he met his mentor and friend Jean-Georges Vongerichten.  Holding both pastry and sous chef positions, Simon helped Lafayette receive its New York Times four-star rating in 1988. Soon after, Ivana Trump appointed him executive chef of The Plaza Hotel’s Edwardian Room, where he was the youngest to hold that title. Almost immediately the restaurant became one of city’s hot spots, with celebrities such as David Bowie, Iman, Matt Dillon, Diane Keaton, Debbie Harry and INXS clamoring for a reservation at the private chef’s table.

In search of a new adventure, Simon left The Plaza’s Edwardian Room and traveled to Russia, Europe and the Far East.  When he returned to the U.S., he chose the city of Miami for his comeback, where he opened Blue Star at the Raleigh Hotel. It was here that Simon first developed what would become his signature approach to American comfort food. Blue Star was an immediate success, leading Simon to open The Raleigh’s Starfish, a seafood restaurant. Max’s and Mercury restaurants soon followed.

In 1998, Vongerichten needed a corporate chef and Simon joined his friend to launch and oversee restaurants in Las Vegas, New York, Hong Kong, London and Chicago. When Mercer Kitchen in New York City and Prime in Las Vegas opened, Simon split his time between the two coasts, holding positions of partner and executive chef at both restaurants.

In Las Vegas, Simon first met his future business partner Elizabeth Blau, and together, they opened Simon kitchen + bar at the Hard Rock Hotel & Casino in 2002.  An overnight success, the restaurant was selected as one of “America’s Best New Restaurants” by Esquire magazine.

Los Angeles was a logical next step for the Iron Chef America winner, who has many friends in the entertainment industry. In 2006 he and Blau opened SIMON LA at the revamped Sofitel Hotel in Hollywood. At SIMON LA, the chef’s modern American cuisine continues to win rave reviews from Angelenos, making the restaurant one of Hollywood’s most popular dining destinations.

In 2008 he returned to the city he calls home with two exciting openings: CatHouse at the Luxor Hotel & Casino and Simon at Palms Place, where he offers a steak and seafood menu under California modern design by the Rockwell Group.

Today Simon’s creativity, sense of adventure and passion for his craft have laid the foundation for all of his restaurants, uniting food and fun in an environment guests return to time and again.

How often do you fly: Once a week on average

How many countries have you been to: 12+

How many continents have you been to: Five

Least favorite country: haven’t been there yet

Do you unpack into the dresser/closet? Or live out of your suitcase? Mostly live out of suitcase

Favorite hole in the wall: Double Down Saloon

Five things you bring on a plane: iPad, iPhone, magazines, something to write on and my own snacks

What do you always seem to forget: I think I forgot

What do you want your loved one to buy you from an airport duty free store? Exclusive scents

Most embarrassing travel moment: I may have screamed in my sleep once

Worst travel moment: Flying into a Typhoon on one of the world’s largest plane Tokyo

Best travel tip:  Make sure your phone is charged 100%