Want to know how to travel in style, just like the pros? We check in with  frequent fliers to find out how often they fly, their favorite destinations and  what they never leave home without. 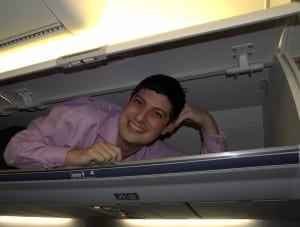 Occupation: I travel. A lot. I try not to work too hard otherwise.

Short Bio: I first started learning airline schedules using Eaasy Sabre via Compuserve in the early 1990s, though I was hooked on flying well before that. One day I decided that traveling more and working less seemed like a really good idea so I quit my job and booked a flight to Hong Kong for Chinese New Year. More than a million miles flown since then and I’m not planning on slowing down anytime soon.

How often do you fly: I travel 2-3 times each month, sometimes nearby and other times across the globe. That adds up to around 200,000 miles in the air each year.

How many countries have you been to: I’ve been to 70 countries so far; it is getting harder to visit new ones but I’m still trying.

How many continents have you been to: Six continents down; just need to find a way to get to Antarctica that I can afford.

Favorite American city: New York City, because we have a bit of everything.

Favorite international city: Istanbul, for the mix of history, culture and food.

Least favorite country: Well, I was robbed headed in to Togo, so that wasn’t a particularly good first impression, but it still has some charm. I don’t really have any places I hate.

Favorite World Heritage Site: I had an absolutely magical day walking the Lavaux Wine Trail in Switzerland. Incredible to think that they’ve been doing basically the exact same thing there for 2000 years.

Favorite aircraft type: I haven’t met a plane I didn’t like. That said, the newer technologies of the A380 and 787 do make for a more comfortable ride.

Aisle or window: Window. Every time.

Favorite airport lounge: The Turkish Airlines lounge in Istanbul is pretty impressive for a business class lounge. That said, with a longer layover I’ll head in to town rather than sit in a lounge.

Favorite U.S. airport: JFK T5 is one of the better terminals in the country, and it is one of my hometown options. I love landing at San Diego, particularly looking out the window on the “A” side of the plane as you come in over downtown.

Favorite international airport: I’ll put Queenstown, New Zealand and Quito, Ecuador out there, not because the facilities are anything special but because landing at either is quite an experience. Or maybe the coquina “road” from the hut at Caye Caulker, Belize into town.

Do you unpack into the dresser/closet? Or live out of your suitcase? I live out of my suitcase. And my wife would probably say I do the same thing even when I’m home.

Drink of choice (In the air and on the ground): Vodka on the rocks or rum with ginger ale.

Right now I am reading: Hard Landing: The epic Contest for Power and Profits That Plunged Airlines into Chaos. I trust airline executives even less now than I did before, but the history behind the industry really is fascinating.

Five things you bring on a plane: Passport, Kindle, Laptop. Anything else I might have forgotten I’ll pick up when I get there.

What do you always seem to forget: I’m getting much, much better about it, but I’m rather embarrassed to admit that I’ve left my laptop on the plane more than a couple times. I usually get it back, but not always.

Favorite travel app(s): I don’t think I could travel the way I do without TripIt. My itineraries are too hard to coordinate. TripIt makes it so much easier, even just with the free version.

Worst travel moment: Getting robbed as I walked across the border from Ghana to Togo. I was pretty shaken up by that one. I’ve since told the story a few times and am much, much more comfortable with it, but it was a bad scene at that time.

Best travel tip:  Stop focusing on bucket lists or specific destinations as the only places you’ll visit. It is a big world and there are tons of things to see everywhere. Rather than getting caught up on only wanting to see one thing go wherever the price and schedule is right at that particular time. And then do it all over again next time to somewhere else. You’ll still have incredible experiences and still see amazing things. And you’ll stretch your boundaries and imagination in ways you never knew possible.