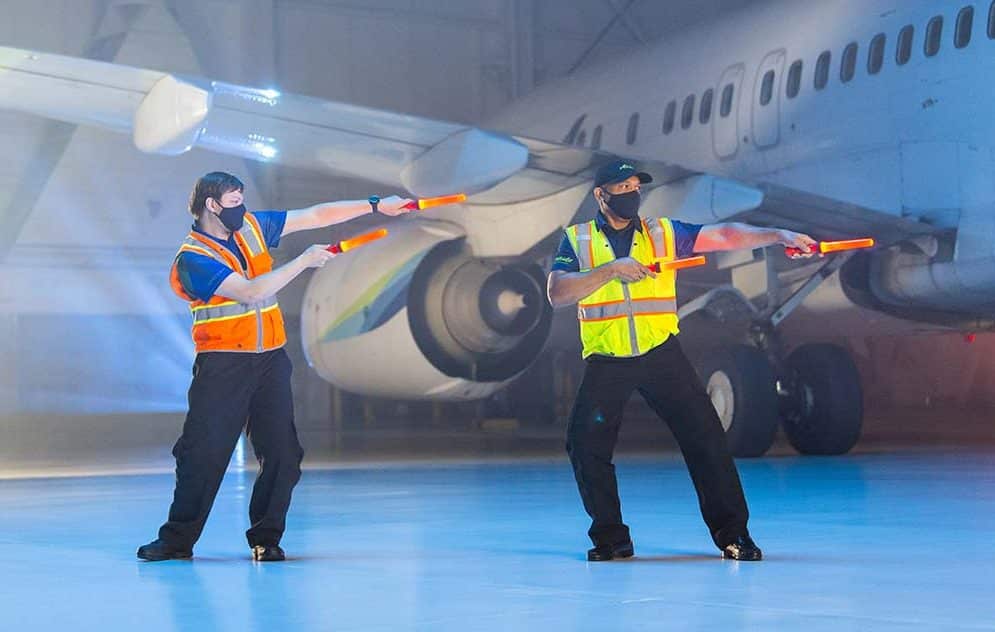 You’ve gotta love airlines that invest in creating entertaining safety videos because they know it will make passengers actually stop what they’re doing, watch and pay attention to important information that could save lives. Air New Zealand is arguably the best in this category (they just released a new safety video last week) but this new Alaska Airlines safety video is definitely giving them a run for their money as one of the best made.

First of all, it’s only 60 seconds long and was directed by Warren Fu who is known for his work with artists such as Dua Lipa, The Weeknd and Daft Punk. The video was choreographed by Anna Matuszewski, who is known for her work with Macklemore. So right there, you know it’s going to be entertaining and that’s before you add in the music from the group Men Without Hats. BTW: I had no idea the new wave and synth-pop band were Canadian.

Alaska Airlines changed the words of the hit 1982 song to feature a number of the 100+ ways Alaska is focused on keeping their guests and employees safe. Some of the lyrics are hilarious like “we can fly where you want to, we can leave your house behind, but if your friends don’t mask, and why don’t they mask, they won’t fly this airline.”

According to Alaska Airlines’ blog, they used all of their own employees in the video and they were chosen in a variety of ways, including a few from their Alaska Flight Attendant Drill Team (who dance through the streets of Seattle for the Torchlight Parade and other events around the country to represent the company “while others were chosen based on workgroups, ability and willingness to dance, and leader nominations.”

Some had never even danced before like Michael, a ground service agent at Horizon Air. He said, “I focused on working hard at rehearsal and doing my best to keep up. I kept practicing the moves in order to successfully pull this all off.”

RELATED: How To Bypass the Long Lines on Arrival into Hawaii

The video took more than two full days to film in their Boeing cabin trainer and the Alaska Maintenance Hangar in Seattle with a production crew of approximately 40 people. To prepare, employees were given videos of the choreography in advance and asked to practice at home prior to arriving on set. The day prior to filming, employees did a full 8-hour dress rehearsal where the group perfected the moves with the choreographer.