Traveling to Get a Colonoscopy

I debated whether or not to share this story, for fear it may be too much information. But I think it’s important to bring up the subject. As you may know, my beloved mother died of colon cancer in 2000 and if she had had routine colonoscopies, she probably would still be alive today. Because of that, all my siblings have received a colonoscopy and have been encouraging me to do the same — we don’t want any repeat tragedies.

A few years ago, I obliged and the day before my appointment, my doctor’s office called to say my insurance company, Blue Shield of California, won’t cover the cost since I’m not 50 (or even close to it). However, if I still wanted to get one, it would set me back $3,000. THREE THOUSAND DOLLARS to have a five-foot rod shoved up you know what?! I don’t think so, I told them.

The past few years, I’ve had this little voice in the back of my head saying “get a colonoscopy, get a colonoscopy.” It wouldn’t stop. So finally I looked into it. I thought about traveling to Bangkok, Thailand to get one since it’s under $1,000 and their private hospitals are run like five-star hotels with U.S. trained doctors. But I opted for a shorter flight … Erie, Pennsylvania. It’s where my sister and dad live in the summer and they have an excellent doctor (Dr. Reilly). I was told the procedure would only cost $1,800 if my insurance wouldn’t cover it.

I recently called them and was able to schedule a pre-screening appointment and colonoscopy for the few days I was in town this past week. I was nervous even though everyone was really nice in the office (and later, at the hospital) and assured me this was the right thing to do. To get more feedback, I posted a message on my Facebook page and everyone said it was a piece of cake. The worst part was the prep — especially drinking the laxatives.

I went to the pharmacy and bought the four Dulcolax tablets and Miralax powder. I actually bought the no-name brand since it was 30% cheaper. I grabbed 64 oz. of lemon-lime Gatorade, went home, mixed it into the powder and drank an 80z glass every 15-20 minutes between 1pm and 5pm. Then I took the four tablets an hour later.

The chilled Gatorade didn’t taste bad at all. It tasted the same. Fortunately, I wasn’t sitting on the toilet all day as I had expected. That was a relief because I forgot to swing by Loews and buy a seatbelt for the toilet and a hard hat. I made about a dozen brief trips to the loo and without getting too graphic, after the first couple times, all was clear like lemonade and there was no odor.

The most difficult part for me was not being able to eat any solid foods the day before or drink water six hours before the procedure. Looking back, if I had scheduled my appointment for early morning it would’ve been a piece of cake but being on European time (I woke up at 4am) and having to wait until 1:45pm was difficult. Time seemed to stop; I was weak and dying of thirst.

My dad, being the cool man he is, insisted on fasting with me and then drove me to and from Hamot’s Surgery Center. After reading the fine print of the consent forms, my cold feet started to get colder.  Not being able to get the doctors to guarantee 100% that everything would be okay had me questioning why I wanted to do this? I’m a healthy man, have never been under anesthesia before, and have read horror stories about doctors messing up. But that little voice was back: “Get a colonoscopy.” So I sucked it up.

It was cold in the surgery center and the nurse gave me a warm blanket after I changed into the hospital gown. I got hooked up to an IV and patiently, or rather nervously, waited my turn. They took all my vitals and asked many questions including, “Are you the victim of any abuse you would like to report today?”

When it was go time, I walked into the operating room like Sean Penn did in Dead Man Walking. I laid on the gurney on my left side as instructed. I got hooked up to a heart and blood pressure machine and had an oxygen tube placed up my nose.  It was freaking me out a bit but that was nothing compared to the moment when I asked the nurse what kind of drug she was administering. “It’s Propofol — you know, the same one that killed Michael Jackson.” What? I looked at her like a deer caught in headlights but she assured me it’s perfectly safe unless you self-administer it like he did.

The doctor came in, made some small talk and the next thing I know, my ears were ringing from the drug and I was out cold. The next thing I remember was waking up in recovery room and the nurse telling me that I told her I had dreamt about being in Italy and eating pasta.

Then my dad and my sister came in. My sister had brought me a chocolate shake from McDonald’s, which tasted like heaven. My stomach hurt and the nurse and doctor said it’s just gas and to let it out. It worked. The best news was the doctor said I was all clear — no polyps and I won’t need another colonoscopy for four years. Hallelujah!

My dad drove me back to my sister’s house and a few hours later I was feeling normal. Overall, it was a great experience and I’m relieved that the little voice in the back of my head is finally saying, “Well done.”

Related: For a hilarious take on getting a colonoscopy, read Dave Barry’s “A journey into my colon — and yours”. 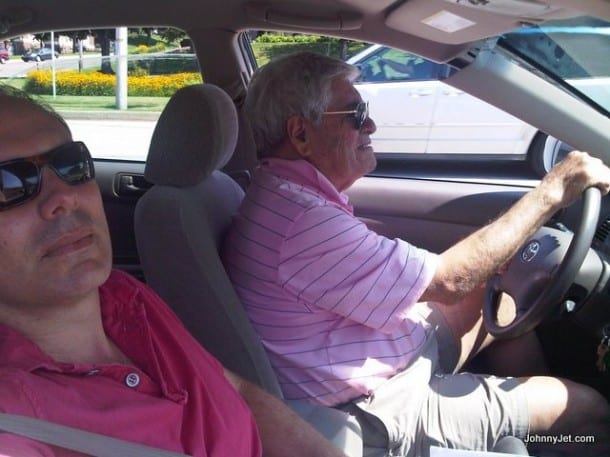 My dad driving me back 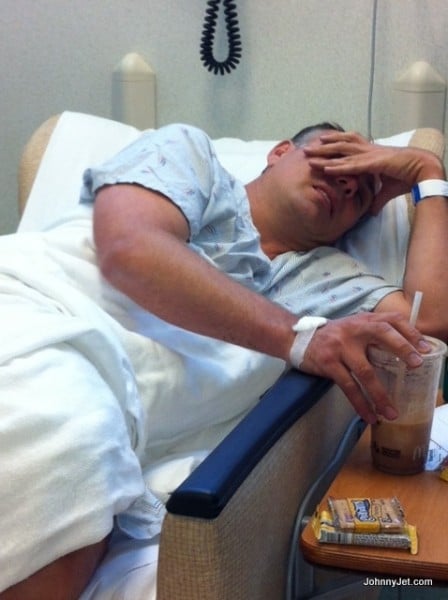 What just happened to me 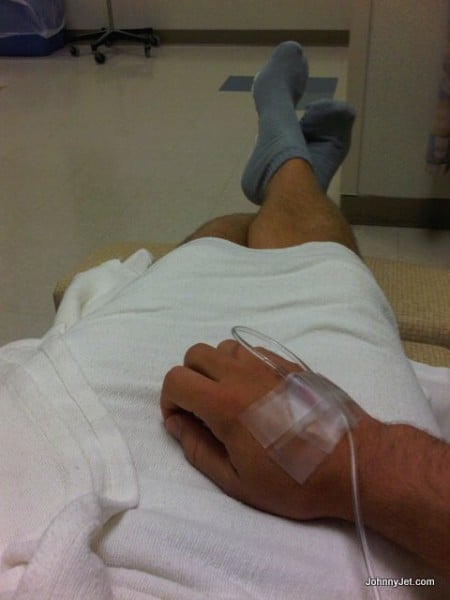 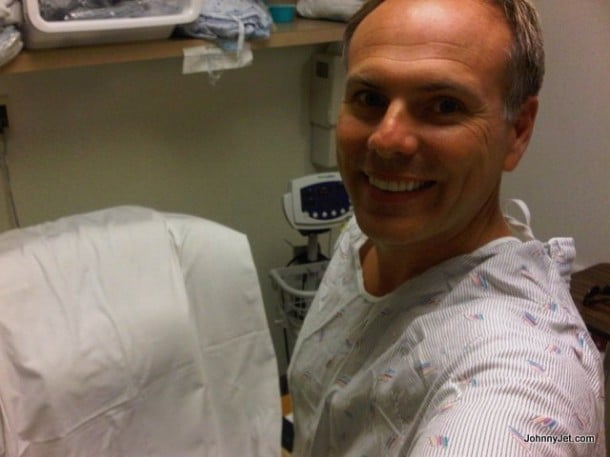 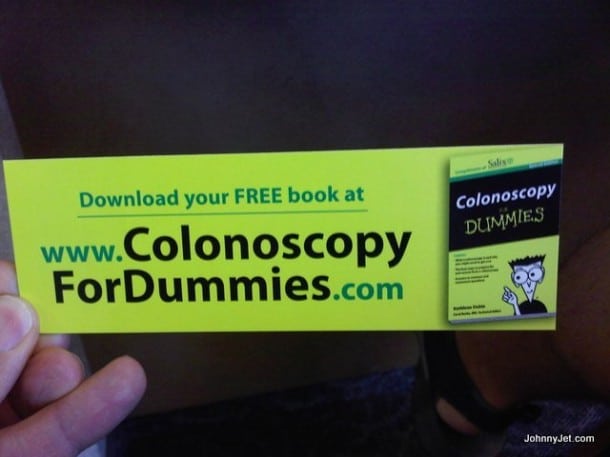 In the hospital waiting room 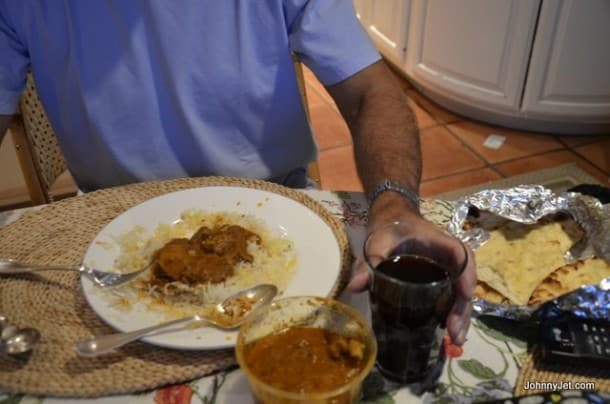 My brother-in-law torturing me 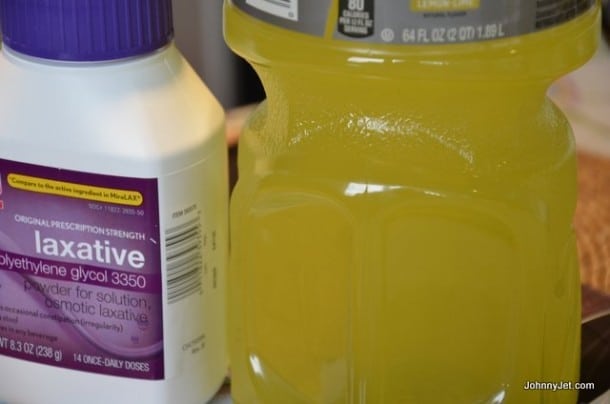 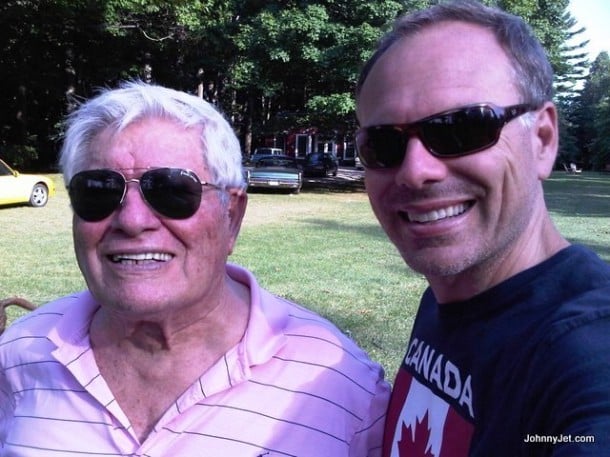 My dad fasting with me
Jul 30, 2012Johnny Jet
Advertisement

2 Comments On "Traveling to Get a Colonoscopy"