The Mayan ruins of Tulum are located about an hour from Playa del Carmen, and have undoubtedly one of the most breathtaking settings of any Mayan site. In fact, it is the only significant Mayan ruin that lies on the coast, perched high on a cliff overlooking the Caribbean Sea. It wasn’t until the late 19th century that Western scientists discovered Tulum, but excavations only began in the early 20th century.

The ruins at Tulum were quite frankly my favorite of the ruins in this area. Although others were more architecturally interesting or the history may have been more dynamic, Tulum was just simply gorgeous with the Caribbean Sea its backdrop.

The walled city of Tulum was at its height as an urban center during the 13th to 15th century, making it one of the youngest sites that served as an important trading post. The ability to make canoes out of local woods revolutionized trade for the Maya at Tulum, as merchants could arrive on the shores below to bring goods.

Prior to that, they could only move what could be carried on a person’s shoulders, as the Maya didn’t use wagons or animal transport (primarily because none were indigenous to the area that would be strong or suitable enough). Their trading voyages extended from the Gulf of Mexico and the coast of the Yucatán peninsula to what is today Honduras.

Using torch light, the iconic El Castillo, perched on Tulum’s highest cliff, acted as a lighthouse to make navigation easier. Because of the rapidly increasing number of tourists to Tulum, El Castillo is now roped-off and not possible to climb. However, on the other side of the little beach, there’s another building on a smaller cliff, which you are allowed to climb. It’s worth the few minutes it takes to get there, as your reward will be one of the best views of El Castillo and the site as a whole.

Aside from the glorious setting, Tulum is also unique for the wall that surrounds it. With the ocean on the fourth side, the establishment could easily defend itself. Certainly plenty of theories exist for why and how this was built, but one that most agree upon is that the wall was put up by the ruling class to further distance or maybe even protect themselves from the so-called “common people,” which would support common belief that the Mayan civilization was brought down by a peasant revolution.

At Tulum are nearly 60 well-preserved buildings, including the Temple of the Frescoes, which has Mayan motifs in the interior. Because of careful excavation, some of the original colors can still be seen. One image you’ll see on this building, and throughout Tulum, is the “diving god” recognized by his wings and bird’s tail. The Temple is built in three levels, symbolizing the three realms of the Mayan universe – the underworld or the dead, the living, and heaven (where the gods lived).

Local busses are available and very economical, although as with Chichén Itzá, it’s much more pleasurable experience to have your own vehicle to get around, especially since it leaves you the option to visit the hotel and beachfront area of Tulum.

Once you arrive at the main entrance to the site, the actual ruins are about half a mile away. It’s not a long walk, but if you’d rather conserve your strength for the ruins, there’s a tram that leaves every five minutes. (Entrance fee is 38 pesos, about USD $3, but kids under 13 get in for free). The ruins are open 8 am to 5 pm every day.

The modern-day town of Tulum

Tulum’s “Zona Hotelera” is worth not only visiting but also staying for a couple or few days. Here, you won’t find a big name chain hotel or 200-room resort. You’ll find small boutiques, stylish palapas, and colorful beach cabañas that range from casual and funky to simple and swanky.

This is the area that I wish I’d had more time in, as it had everything I desire in a destination – unique, off-the-beaten path, exquisite but uncomplicated accommodations, and great energy. It’s not mega touristy, although certainly tourism is their main business and critical to their livelihood here. That said, Tulum has character and flavor that is uncompromised.

One of the best beachfront boutiques is Ana y Jose, a gorgeous hideaway with just 15 rooms. Because of its size, no detail or service is overlooked. Each guest gets personalized attention if desired, but enough space to feel complete serenity among the ocean breeze whistling, exotic birds singing, and lush palms swaying.

While the beaches are very nice in Playa del Carmen, Tulum is a tropical paradise. The white sands and turquoise waters are simply heaven. Arriving there gave me the kind of “wow” moment that I yearn for when traveling.

Before getting to the ruins, we stopped for lunch at Ana y Jose and sat on the beachside patio. It was a feast! From sashimi and tartar of all kinds to the main event, a seafood platter of mostly locally caught crustaceans and fish, the food and drink was impressive.

It was hard to leave, but experiencing the ruins of Tulum as the sun was lowering in the sky was worth the short visit. If and when I return to the Yucatan, you can count on me staying in Tulum to enjoy the peace and beauty it provides. 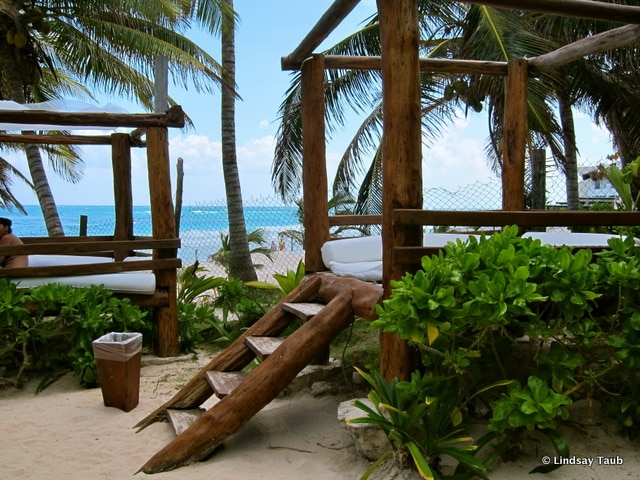 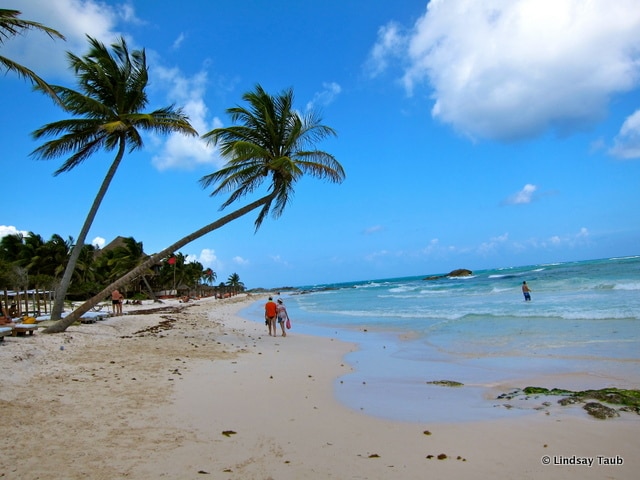 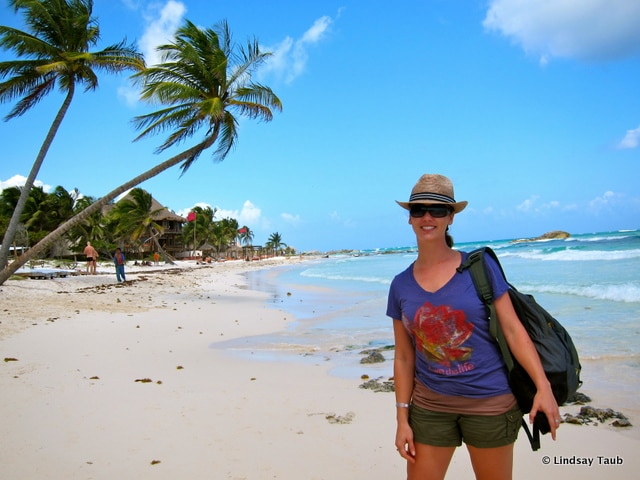 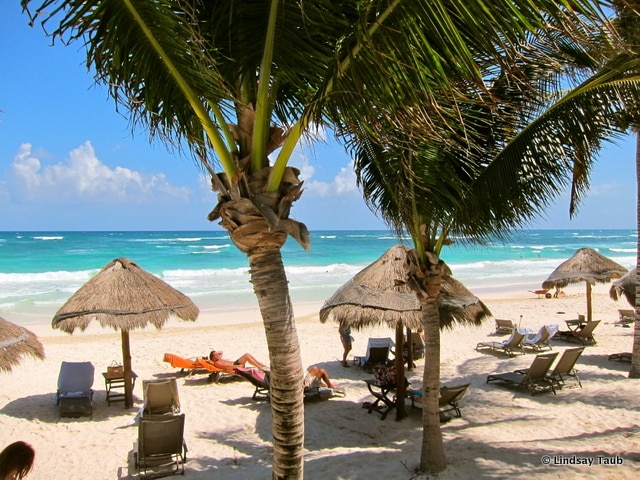 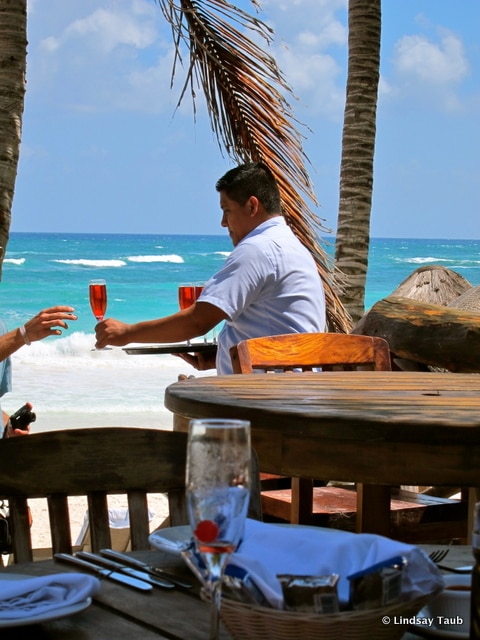 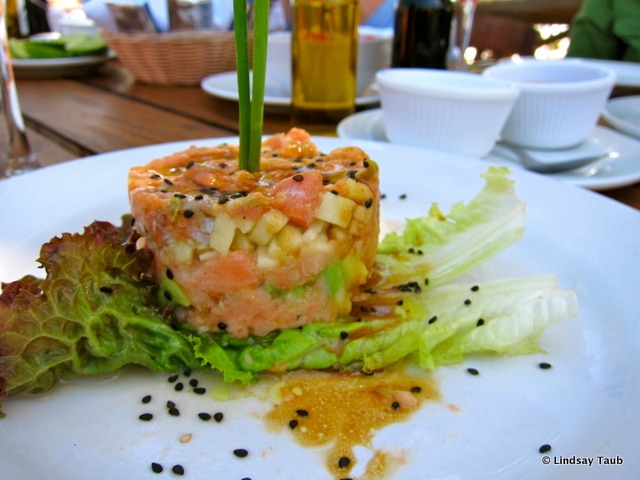 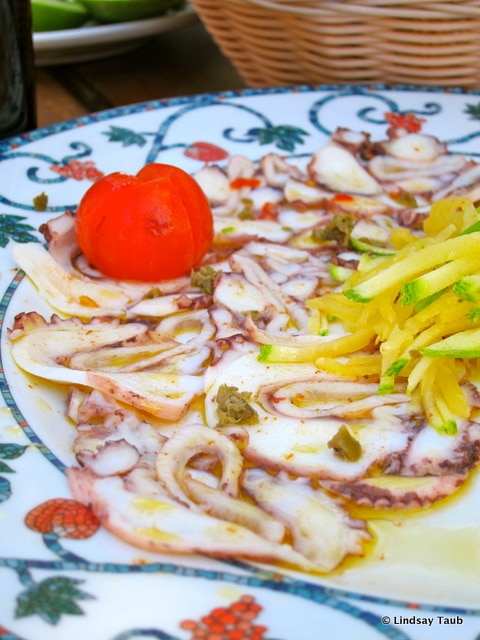 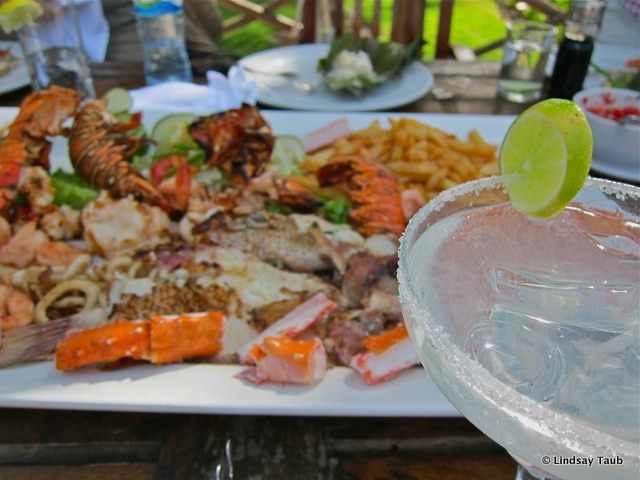 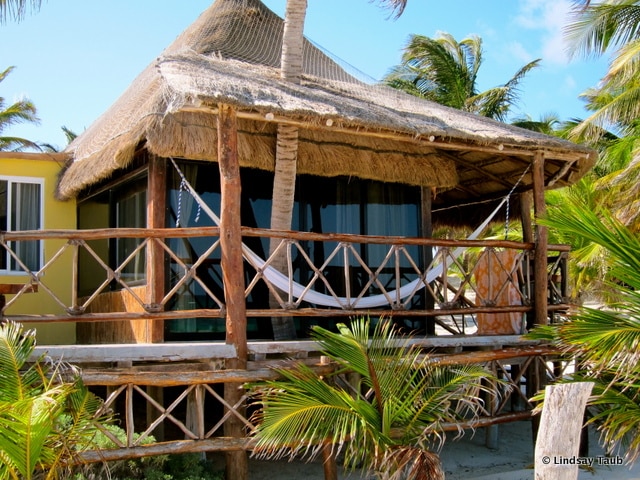 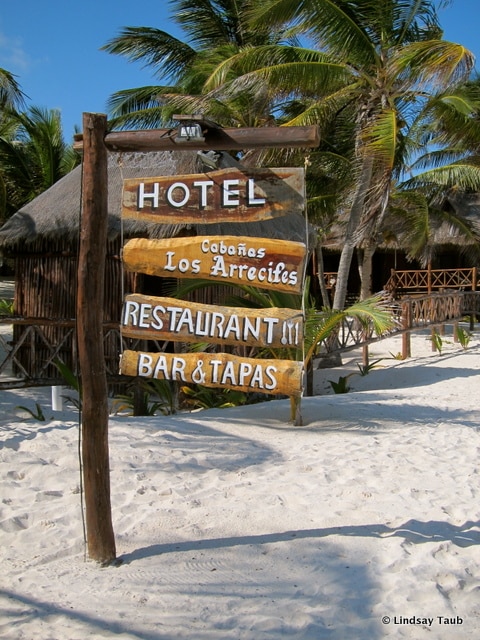 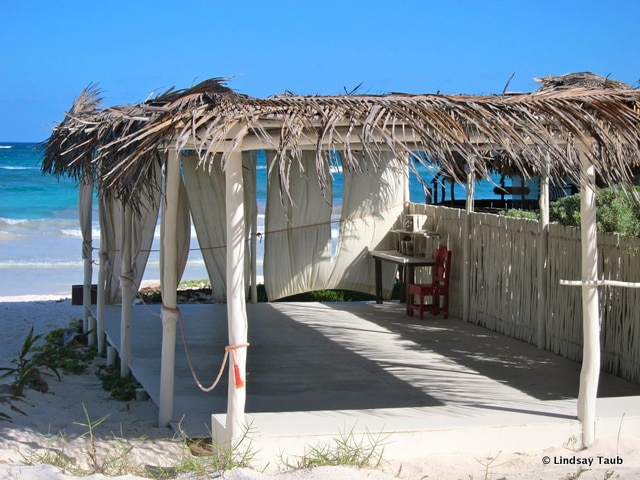 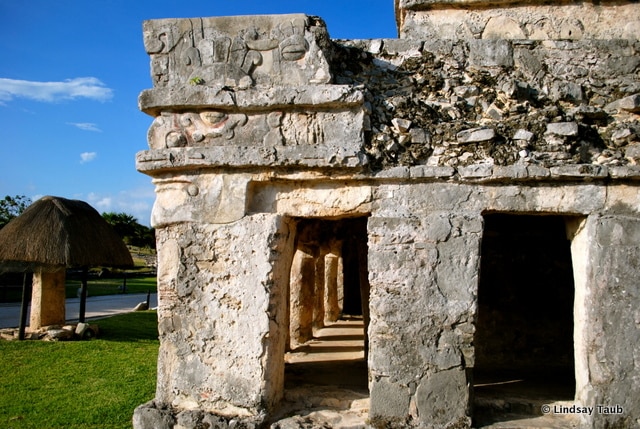 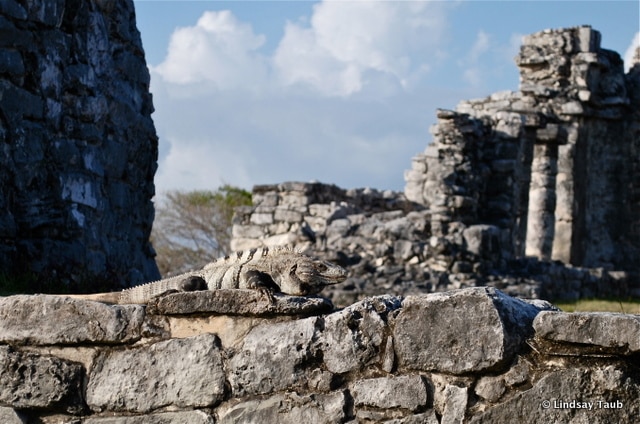 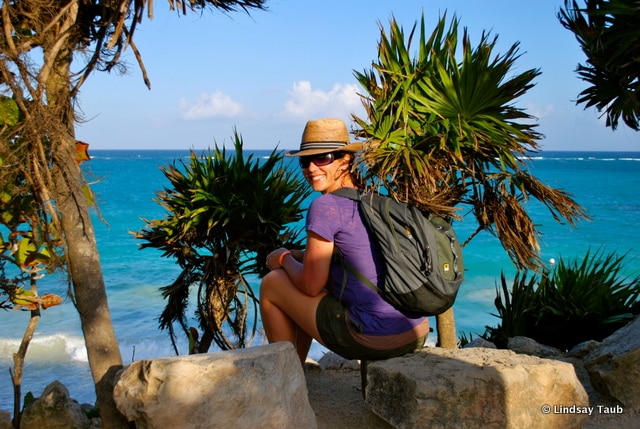 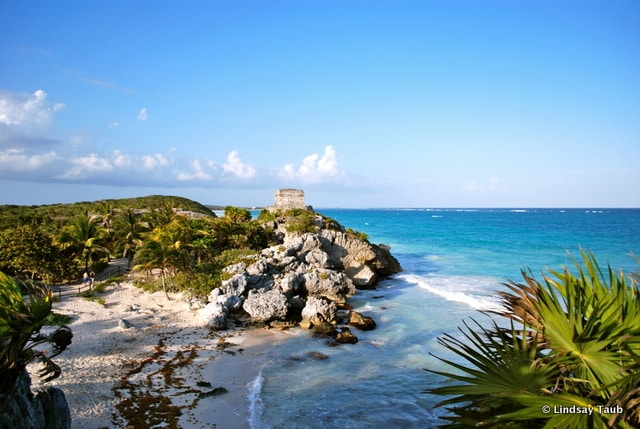 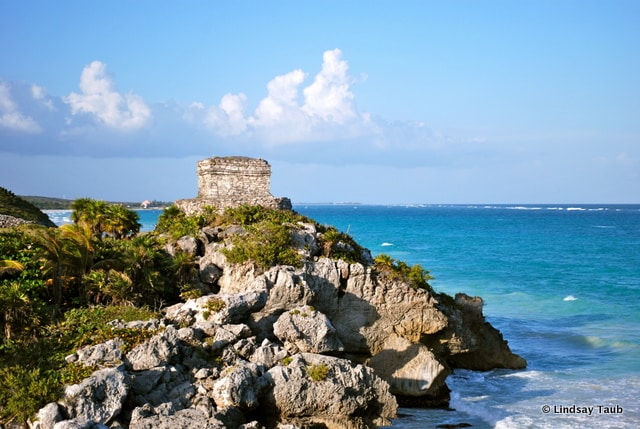 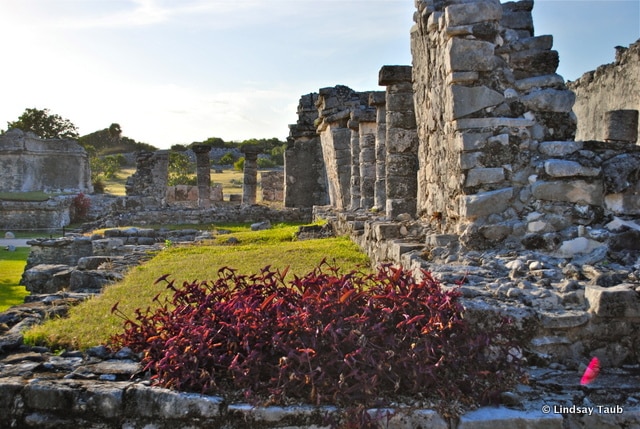 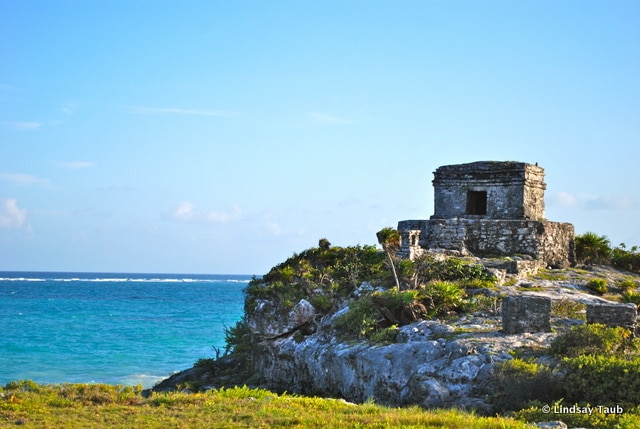