U.S. Airline Complaints Skyrocket – Here’s Why and Tips For Avoiding the Travel Chaos 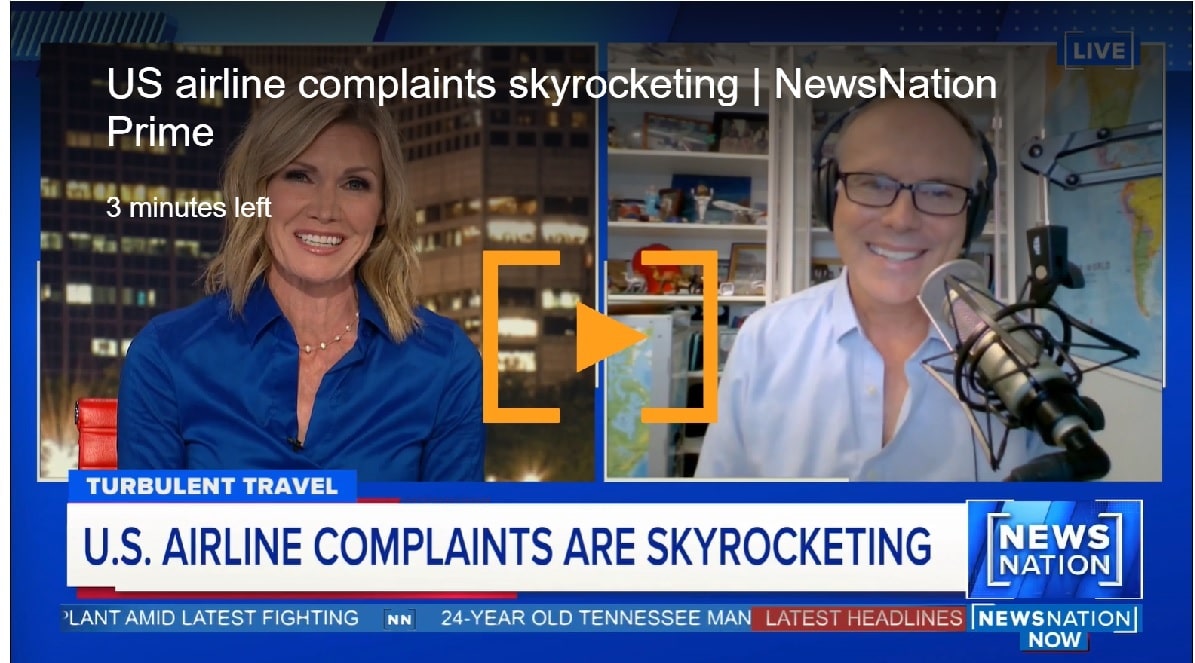 Yesterday, I was on NewsNation Prime with host Marni Hughes to talk about travel, specifically about airline complaints, the ongoing problem with flight delays and cancellations, and what travelers can do about it. The clip is below but as with almost every news interview, we ran out of time and/or I forgot to mention more tips. So here’s a rough version of the transcript.

Does complaining about the problem do anything?
I think it does and since there have been so many complaints this summer, Secretary of Transportation, Pete Buttigieg, has had some strong choice words towards airline executives. He’s threatening fines and he’s creating a new consumer friendly dashboard in the next few days (he set a deadline for Sept 2) so travelers will know what each airline owes them if they’re hit with delays or cancelations.

There are lots of theories … Why do you believe we’re seeing so many delays/cancellations?
There are a lot of factors including the airlines overscheduling flights, under staffing for all jobs at the airlines, from reservation agents to pilots, and some understaffing at the FAA. There are also a lot of workers getting sick with Covid and of course, bad weather, which has always messed up airline schedules but even more so today with so few workers on standby.

What are foreign carriers doing better- over half of the complaints are US based?
I don’t think they’re doing anything better. Actually, many international airlines have been worse like SAS, Air Canada, Virgin Australia, Qantas, KLM … Air Canada was arguably the worst when it came to refunds, which is why the U.S. government fined them $25 million, but they only paid a fraction. The only international airline that I can think of that is doing a good job is Singapore Airlines.

What about the idea that airlines would have to refund people who have a flight cancelled? Would that make a difference?
Airlines already have to. If your flight is significantly delayed or canceled, the airlines have to give you a full refund. Don’t accept a voucher.

Can this get worse? Fall/holiday season?
It definitely can get worse if there’s a bad storm but I’m an optimist so I think it will get better especially since the kids are back in school and the summer crush is over.

Advice for people booking travel over the next few months
-Set fare alerts to get cheapest ticket (here’s how to set a fare alert)
-Book nonstop flights
-Take first flight out in the morning
-Signup to trusted traveler programs like TSA Pre Check,Global Entry, Clear, Nexus (for Canada)
-Choose an airline with a lot of frequency
-Don’t check a bag; if you do, drop an AirTag in your bag(s)