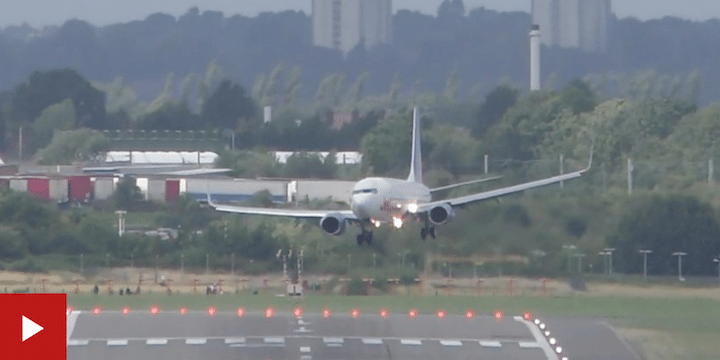 I usually don’t like to post pictures or videos of frightening images involving planes, but I think it’s important for the public to know how challenging it can be for pilots to land in strong winds (in other words, how much credit they deserve). This past week, in which a big storm moved through parts of Europe, provided two great examples, captured in video below. Hats off to the pilots involved in each difficult landing.

As shared by the BBC, “Storm Ciara brought rain and gusts of wind in excess of 90mph in some areas of the UK on Sunday. Airlines cancelled hundreds of flights, while rail travellers and drivers also faced disruption. Photographer Dafydd Phillips captured these views of aircraft precariously trying to land at Birmingham Airport.”

(Off the runway, Storm Ciara did real damage in the U.K. Per The Independent, at least 500 homes were flooded and more than 20,000 homes lost power for the night. “Some areas,” it said yesterday, “saw a month and a half’s rainfall in just 24 hours.” Travel disruptions, including at U.K. airports, were expected to continue in the days ahead, so if you’ll soon be traveling to the U.K., keep an eye on the situation.)

This Global News video (above), meanwhile was shot at Zurich airport on Monday where the same storm had moved in. Winds of up to 130kph on the plain and up to 200kph in the mountains hit northwestern Switzerland!