A New Zealand man is another man’s hero after catching a falling phone while speeding 134kmh (83mph) on a roller coaster. Samuel Kempf of Timaru, New Zealand, was in Europe representing New Zealand in the Fistballing World Championships (Wikipedia says fistball is sort of like volleyball but played with closed fists and with bounces). While visiting PortAventura theme park in Tarragona, Spain, he strapped into the park’s Shambhala roller coaster. And that’s when it happened.

“The guy two rows ahead of me, as the ride started doing its ascent before it drops, he had his phone out and he dropped it and it just landed at the bottom of his cart,” Kempf told Stuff. “He was trying to reach down and grab it but because he was locked in he couldn’t reach it and I just jokingly said to my brother and the people we were with ‘get ready to catch.'”

And then, as you’ll see in the video, Kempf sees the phone drop. And so he reaches out—while moving 134kmh (83mph)—and grabs it with his right hand. According to Stuff, Kempf returned the phone to its owner, who was looking for it on the ground below the coaster. “He couldn’t believe it,” said Kempf. “He gave me a big hug.” Later, the man also bought him a copy of the video taken on the coaster as a “thank you.” 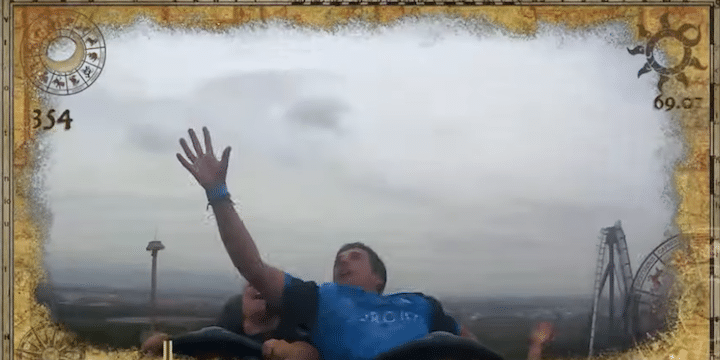