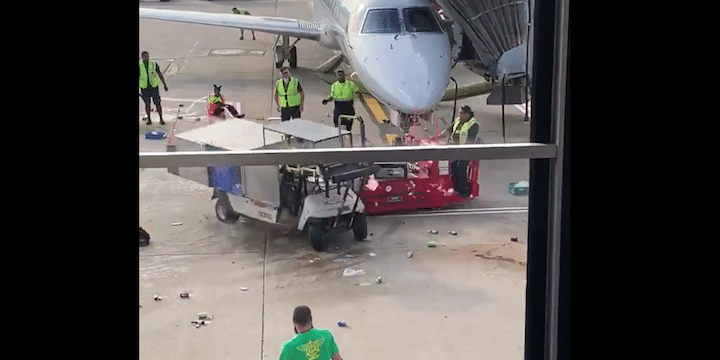 Yesterday at Chicago O’Hare International Airport, a crazy scene unfolded on the tarmac. Today, video of the incident (below) is making the rounds.

Here’s what happened: A rogue O’Hare catering cart, operated by Gate Gourmet, with no one behind the wheel began spinning in wild circles beside an American Airlines plane. Employees in vests looked on, unable to stop it. To save the day, another employee in another cart rammed into it, which ended the mayhem. And fortunately, a passenger in the terminal captured the whole thing on Twitter:

Crazy event at ORD. Heads up safety move by a ramp worker! pic.twitter.com/SQi5zB0Ooz

In a story on the incident, USA TODAY included comment from American Airlines. “American Airlines is investigating an incident involving a catering truck this afternoon at Chicago’s O’Hare International Airport,” said American spokesperson Ross Feinstein. “Preliminary reports indicate that the accelerator became stuck and caused the catering cart to lose control.” Feinstein also reported, per USA TODAY, that “no one was injured, and applauded the employee whose quick action stopped the vehicle before it crashed into the nearby Embraer 145 regional jet operated by American Eagle.”

Writing for View From The Wing, which called the O’Hare catering cart video the “best the best 30 seconds you’ll spend today,” my buddy Gary Leff writes that the incident also resulted in a 10-minute delay. Given what could have happened, that’s not too bad. As for the hero? Gary calls the him a “fighter pilot to the hijacked jet, willing to shoot it down, taking out everyone on board and all of the cargo too.” Hats off to him.