I’ve had the honor of being on two flights that have had fallen soldiers onboard. I wrote about the first experience, on a Delta Air Lines flight from Atlanta to L.A., back in 2013 (here’s the story, which went viral). The other flight was in January of this year, a Honolulu-to-Los Angeles flight. So far I haven’t gotten around to writing about it, but I’d like to eventually.

The airlines and military do a really good job of flying home fallen soldiers, as I’ve seen in person. And you’ll see the same in the video above. In the video, a Southwest pilot flies his father home from Oakland to Dallas Love Field. The pilot (a captain) saw his father off to war as a kid and lost him before he could make it home.

According to the Washington Post, captain “Bryan Knight was 5 years old when he waved goodbye to his father from Dallas Love Field Airport. He never saw him again. The year was 1967, and Roy Knight Jr. was heading to war. The pilot reported to Udorn Royal Thai Air Force Base in January. By May, after flying near-daily combat missions, Knight was missing, his plane shot down over enemy territory in Laos. It was another seven years before his family found out he had been killed. And on Thursday, 45 years after that, they finally received closure.

“Knight’s remains, recovered near his plane’s crash site more than five decades after it went down, were flown from Honolulu to Oakland, Calif.”

Bryan flew his father home with paying passengers aboard, and as you’ll see, he got a hero’s welcome. I can pretty much guarantee you’ll need to have tissues within an arm’s reach. 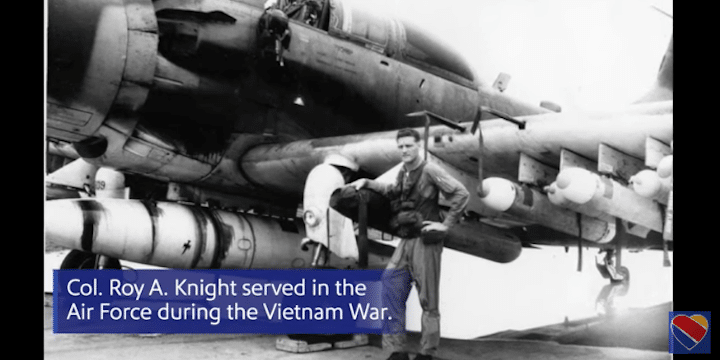