It’s crazy that practically every day, it seems there’s another story about people doing crazy things. Usually, it’s about airline passengers (like this video of a woman flipping her lid at the check-in counter or this shocking video of a passenger hitting an American Airlines flight attendant in the back of the head). But we’re also seeing an increasing number of tragic stories about tourists dying from doing things they shouldn’t. 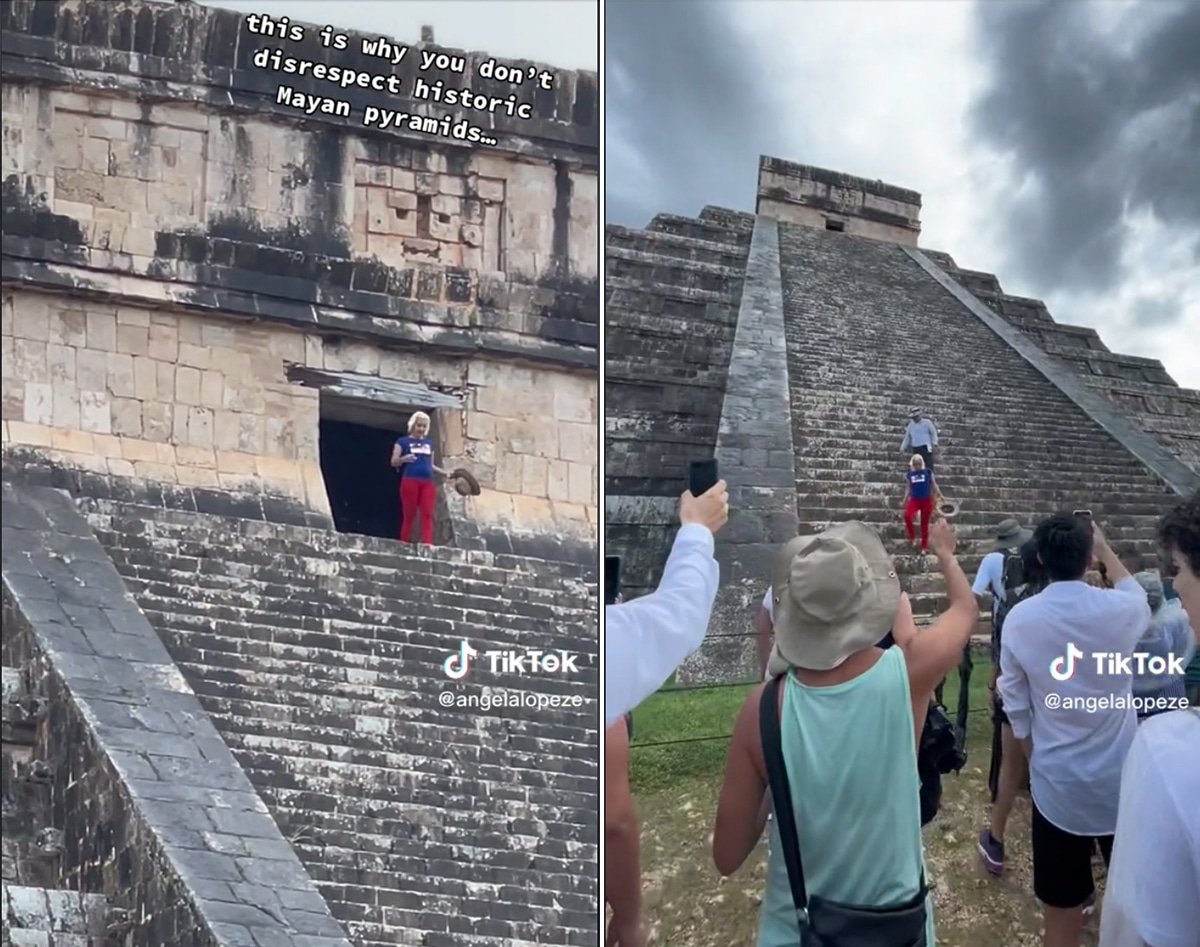 What happened in Mexico this week is sadly another example of a me, me, me, attitude. According to The Independent, a “woman was filmed by bystanders scaling the enormous El Castillo (also known as the Temple of Kukulcán), a Mesoamerican step-pyramid at the Chichen Itza archaeological site in Mexico.”

Climbing El Castillo has been forbidden since 2008 due to concerns about preserving the ancient archaeological site. Well, if you need reason number 158 not to disrespect signs and/or local customs when you travel, then check out this video, shot by @AngelaLopeze:

As you can see in the video, a blonde woman scales El Castillo’s stairs and dances at the top as a security guard begins the long climb up to remove her. When she reaches the bottom of the stairs, a crowd of angry people starts booing, shouting and chanting “jail, jail, jail” in unison. It looked like almost everyone had their phone out to record her and you can see that the security guard actually had to protect her from physical violence as onlookers knocked her hat off, and threw water and water bottles at her.

Obviously, no one deserves to be touched or have things thrown at them. She was clearly in the wrong but that mob was terrifying. It just goes to show how quickly people can get engraged for disrespecting historic sites.

In fact, according to the Daily Mail, a few hours after the video went viral (it has over 4 million views), the National Institute of Anthropology and History (INAH) issued a statement that the monument had not been damaged but fines for climbing the temple range from $2,569 to $5,138, depending on the damage caused to the structure. “Article 47 of the Federal law on Archaeological, Artistic and Historic Monuments states that a punishment of one to ten years in prison can be handed out if a person is found liable.”

It’s not clear if the tourist was fined but Fox 11 reports: “Local news outlets reported the tourist was detained “and taken to the nearby town of Piste for questioning.”

According to another Daily Mail article, the tourist wasn’t an American as I had suspected but rather a Mexican. The woman “has been identified by a local news outlet as Abigail Villalobos, 29, of Mexico.”

I didn’t know climbing these archaeological sites can be seen as disrespectful. I once climbed a much smaller one in Belize but it was actually encouraged by the local guide and there were no signs or ropes cording it off. The one I climbed was probably half the size and it was scary for someone with a fear of heights.

Another time, I was in the outback of Australia and when I was visiting, you could climb Uluru (formerly known as Ayers Rock) but my guide said, “Although it’s allowed, the locals prefer you don’t since it’s disrespectful.” Of course, I didn’t need to be told twice. It is never a good idea to disobey or disrespect local laws and customs and this story is a cautionary tale for all travelers.

2 Comments On "VIDEO: Tourist in Mexico Booed and Doused With Water By Angry Mob After Climbing Sacred Mayan Temple"