The Coolest Website for Tracking Current and Past Flights

If you’re an aviation geek (AvGeek) like me or you just want to know what plane just buzzed over your house, you need to check out WebTrak.

The site will prompt, “You haven’t chosen any site. Do you want WebTrak to find the nearest airports?” You then choose one of their 78 airports in 13 countries (they’re listed below)—including 28 U.S airports that range in size from small private airports like Boca Raton to mega airports like LAX—and voila! A dynamic map of that airport’s/area’s air traffic will pop up. The dashboard includes, in addition to the planes moving around, the weather and any messages, which include news (like if an airport like LAX is experiencing construction). For example, there’s a message on the LAX map in there now that reads “LAX will temporarily deviate from Over-Ocean Operations on October 30 – November 2 from 12 AM to 6:30 AM due to runway closure for extended maintenance. As a result, residents may notice a change in aircraft flight activity and noise. Click here for details.”

With each WebTrak map, you can track current and past flights. The default is current flights. You’ll see them on a Google Map with which you can zoom in and out and hover over or click on planes to get more info—like flight ID, aircraft type, origin and destination airports, and altitude. At the bottom-left, you’ll see a calendar with which you can see past (“Historical”) flights (I believe it only lets you go back two months). It’s pretty cool!

Here’s a full list of airports included, by country: 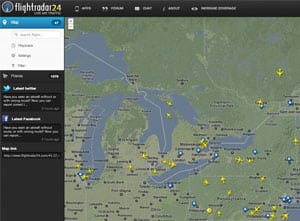