What to Do If Your Seatmate Won’t Wear A Mask 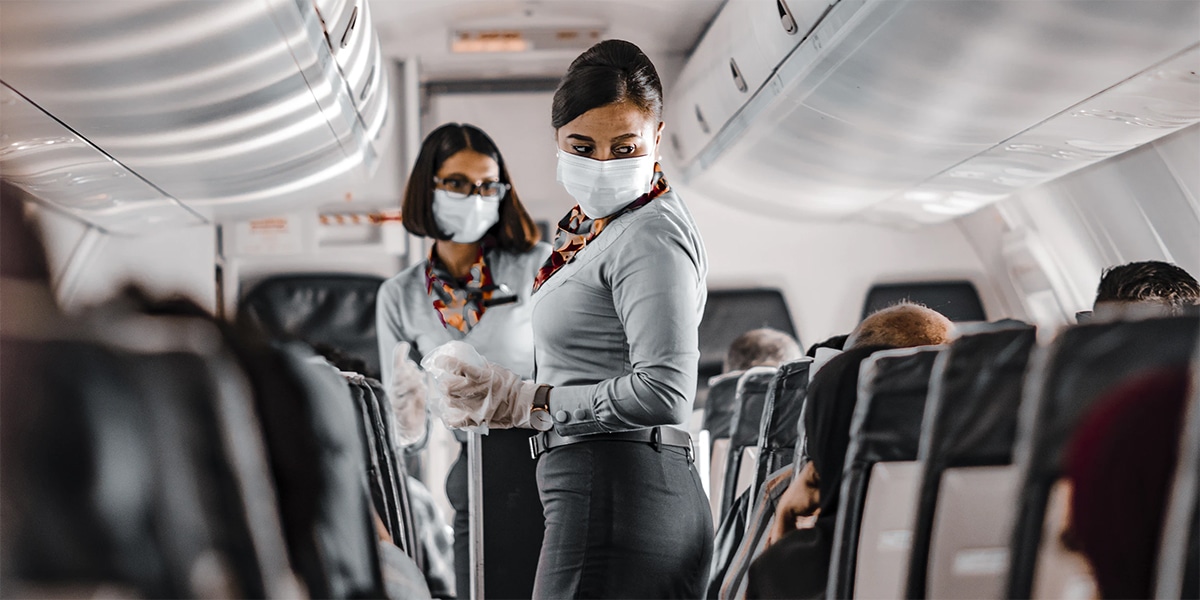 One of my biggest pet peeves (back when I was flying pre-pandemic), was encountering rude passengers, which unfortunately, happened on almost every flight. The most common offense was people watching movies or listening to their music without headphones or earbuds. They would just have their device on speaker mode like they were sitting in their own private living room (much like the many people making phone calls on speaker in the lounge.)

What bothered me even more was people coughing and sneezing without covering their mouth. This was obviously pre-COVID-19 because I think if someone did that today, they would get their head handed to them.

That’s the main reason I have always carried a face mask with me when I travel. Just in case I was seated near a sick passenger or if I wasn’t feeling well myself but needed to fly for whatever reason. Up until a few months ago, it was usually very expensive to change your flight even if you were sick, which was always mind-boggling to me. It also bothered me that most airlines make it so difficult for flight crew to take a sick day, that they would end up flying sick.

Fortunately, one of the silver linings of this nightmare of a pandemic is that most of the major airlines have now eliminated change fees and they claim the change is permanent, though only time will tell. FYI: Most change fee policies don’t include Basic Economy tickets so always read the fine print before buying.

I haven’t flown since late February and the main reason why, besides COVID-19 being out of control, is that I don’t trust a person near me will be COVID-19 free and that everyone will wear their mask, or wear it properly. I’ve seen too many social media posts and news clips of reporters in airports where people are not wearing masks.

In fact, just a few days ago, my friend and fellow travel writer Terry Ward was traveling from Tampa to Houston and then onto Cabo San Lucas when she tweeted: @united seat 29A tampa to Houston 7:10AM flight today. He was asked multiple times to pull up his Buff but pulled it back down every time FAs out of sight. Maskless entire flight. Babies and old people onboard #wearadamnmask

It turns out the same rude dude who was sitting maskless one row away from her, was on her connecting flight and this time just two rows apart. Talk about bad luck, eh? You can read about Terry’s whole experience here since she was kind enough to write about it.

But what’s interesting is that just a couple of days earlier, I read a post in USA Today by Chris Elliott entitled: What to do if your travel seatmate flouts the rules and won’t mask up.

Chris has some interesting advice from etiquette experts who say “the best way to deal with a seatmate who won’t mask up is not to deal with one at all.”

I couldn’t disagree more with that lame advice. Of course, no one wants to get in a fight but just as I would with someone playing loud music, I would ask them nicely to put it on. If that didn’t work, I would ring the call button or go to the galley and ask a flight attendant to deal with it. I’ve never had them turn me down and I’m sure especially not these days, since it’s a health hazard. I can only imagine they would be happy to help for the safety of everyone.

Another option is to see if you can switch seats far away from the offender but that’s not always possible, especially these days as airlines have dramatically reduced flights so flights are full and some airlines are blocking the middle seats. Read: Which US Airlines are Blocking Middle Seats During COVID-19

Chris also interviewed Nick Leighton, an etiquette expert who suggests: “Start with a kind smile and use a value-neutral, nonjudgmental tone for the highest chance of success.” I agree that would probably work best. For myself, I would say something like: “Excuse me, but do you mind wearing your mask? I have an underlying condition and I don’t want to risk getting the virus.”

That might not work … and I wouldn’t be surprised if it didn’t because there are a lot of selfish people out there. For example, I was once on a flight and before pushing back, the flight attendant announced that they wouldn’t be serving peanuts and asked everyone to refrain from eating anything with peanuts or even opening something that has peanuts in it since there was a passenger on board with a life-threatening allergy. Within minutes, a guy across the aisle from me started eating a Snickers bar. I seriously yelled at him and asked if he’d heard the announcement? He said, “Yeah, but I’m hungry and it’s my Snickers bar.” I was ready to kick his ass but he eventually complied and fortunately, we didn’t have to make an emergency landing. And if I recall correctly, the flight was short, like under an hour.

I digress. But in a nutshell, the best advice is either asking nicely, having a flight attendant deal with the situation or seeing if you can move seats.

Airlines aren’t messing around. Just yesterday alone, Delta Air Lines announced that they have banned over 700 passengers for not following their mask policy.