When Valet Gives You The Wrong Car 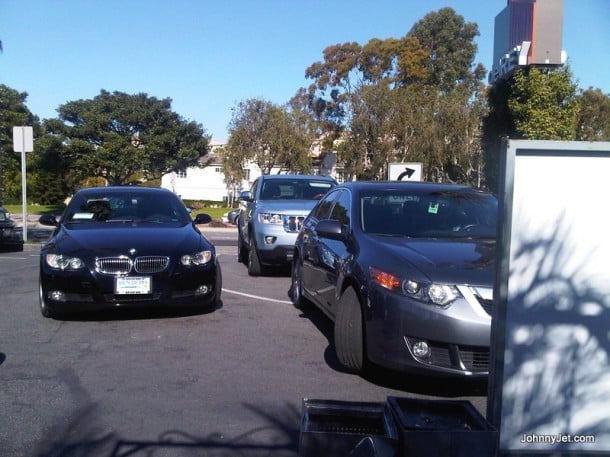 I had lunch today at Café del Rey in Marina del Rey. The views, food and service were all good but their mandatory valet parking was horrendous.

I was actually going to tweet (@JohnnyJet) how backed up the valet was when I arrived but didn’t because my lunch dates were waiting for me. But when I went outside to retrieve my car the line was so long I decided to take action (before tweeting) and go get the car myself.

I walked over to what I thought was my vehicle but didn’t jump in because I noticed there was a woman’s jacket in the backseat. So I looked around the parking lot and then asked the lone attendant, “Where’s my car?” He said, “That’s not it?” I said no. He mumbled quietly as if he was kicking himself, “I told her to give me the ticket.” I said, “Someone took my car by mistake, eh?” After double checking the parking lot he quietly said, “Yes.”

He was surprised that I wasn’t furious, but I actually felt bad for him since he was obviously overwhelmed. The restaurant should have more than just one person working valet especially when self-parking is not an option (I assume the other workers called in sick).

Secondly, believe it or not, I’ve taken the wrong car rental twice–both times because the hotel valet handed me the wrong keys— but this was the first time (that I’m aware of) I ever had a valet  give my car away.

If this happens to you, don’t panic and don’t go on a tirade. Chances are if there’s another car similar to yours in the parking lot, it wasn’t stolen and the driver of the other car just took the wrong one and will realize it within a few minutes. If they don’t return within 10 minutes have the valet look in the glove box of their car for their name and try to get in touch with them. If that fails and you are in a hurry, make the restaurant/hotel arrange and pay for a taxi and return your car to you later. Or call the police if you think it was stolen.

Mine showed up within 10 minutes so it was no big deal. But the first time I took the wrong car (back in the late 90s) I didn’t figure it out until I was 15 miles down the road on I-95 in Rhode Island. It was a rental car and I only realized it was the wrong vehicle because the radio stations I bookmarked were off. Then I double checked the rental car agreement for the mileage.

The second time was when I was a road manager for a boy band (long story) and we were in Chicago doing a mall tour. I had rented a black Isuzu Rodeo from Avis and we were going to my cousins’ house in the northern suburbs to visit his kids.

I called the valet and after waiting 20 minutes I asked one of the attendants if my Rodeo was the one parked across the street. He said, “I don’t think so but let me check.” Then another valet guy comes up and says, “What car are you waiting for?” I said, “A black Rodeo.” He says, “That it’s across the street, it’s been there the whole time, we never brought it down to the garage.” I thought five hours was a long time to be out on the street but since it was a rental I didn’t complain.

My cousin drove because he knew how to get there and I was tired. My girlfriend (at the time) and I sat in the back while the lead singer of the band was in the front. We drove about 20 miles (which took an hour) and my cousin said, “Where did you drive this thing? It only has a half a tank of gas.” I said, “That’s funny we only drove from ORD to the hotel and it had a full tank of gas.” (I double checked beforehand.) I asked how many miles were on it, and looked at the rental agreement. “Oh my gosh there’s a hundred more miles on it then there should be.” Then the lead singer yells, “They pulled a Ferris Bueller!” (You know, the movie in which the valet guys take their car for a 3 hour joy ride.)

We said no wonder why the car was out on the street! When I went to call the hotel to complain I noticed the rental agreement was from National and we rented from Avis. Then it hit us: we were driving in the wrong car!

I called the hotel and said your valet guys gave us the wrong car so please don’t give our car away.

The renter of the car was named Luis X and everywhere we went we joked about how he got “Ferris Buellered.” To cap it off, when we were checking out of our hotel the next day at 6am, I walked out and there were two black Rodeos in the driveway. Guess who the other one belonged too?  That’s right, Luis X!

He comes strutting out and does a double take and says to the valet guy, “That’s funny there’s two black Rodeo’s, what a coincidence.” We then realized the hotel never told him, and we were hysterical.

My advice is to always check your mileage folks. Don’t get Ferris Buellered!

Related: I have also have jumped in the wrong car service and didn’t figure it out until it was too late.

2 Comments On "When Valet Gives You The Wrong Car"