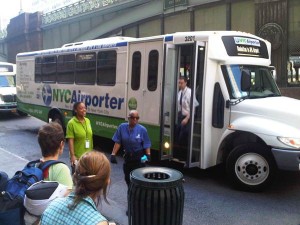 I grew up in southern Connecticut and live in Los Angeles. The worst part of the trip is always getting to the JFK airport since you can’t predict traffic and it’s really expensive. The 42-mile schlep in a car service costs around $150, and shared shuttle vans are a pain since they make a lot of out-of-the-way stops and are unreliable and pricey ($65).

In the past I’ve taken the train into the city then hopped on multiple subways (2) to get the JFK Air Train, but that too is trying when you have luggage. So on this day I decided to try something new: take the train to Grand Central Terminal — GCT ($11.25) and then take the airport bus to JFK ($16); the buses depart across the street from GCT.

I’ve done it when going to Newark and always had a positive experience–after all, they are advertised to depart every 15 minutes and cost $16.

Here’s Why I Won’t Take NYC Airporter Again
When I rolled out of the station at 12:45 p.m., I went up to a roving ticket agent standing next to the airport bus sign and asked if it was the bus for JFK (there are also buses for LGA and EWR). He said yes and that he had one leaving in five minutes. I said, you sure it’s leaving in five minutes and you aren’t just trying to sell me a ticket? He gave me a friendly smile and said of course not. So I plopped down my credit card and paid the $16. It’s a good deal since a taxi is about $65.

After 10 minutes went by I asked one of the other employees where the bus was. She said it was on its way, just stuck in traffic. When it arrived a few minutes later it only had room for one person because it had filled up at their first stop, the Port Authority. I wasn’t the first there, so I didn’t get on, and the other eight waiting passengers were starting to get perturbed like I was. But then another agent came by and said, don’t worry, we have another bus coming in five minutes. A bus did show up, but it was just dropping people off returning from JFK as it made its way to the Port Authority.

I started making friends with a couple people on the curb and we were all getting worried about missing our flights. I met a French pro tennis player who had just lost in the U.S. Open and was flying back to Paris and an older New Yorker woman who was heading to Poland. The latter told me she was skeptical of NYC Airporter because they’re new and that she only chose them because they have nicer-looking buses. I didn’t even realize it was a different company than I’ve used in the past (New York Airport Service). Turns out there are a few companies offering this service and the ticket agents all compete to see who can sell more seats. Note: NYC Airporter doesn’t depart every 15 minutes like its competitors–it leaves every 30 minutes.

At 1:20 p.m. I went over to the friendly female agent and said, what’s going on? When’s the next bus really going to come? She said, It will be here in five minutes. I said, I’m kind of getting sick of the standard five-minute answer. Can you do me a favor and call the driver and find out exactly where he is because I can’t afford to miss my flight. She kindly radioed the driver on her walkie-talkie and I heard him say that he was just about to leave the Port Authority. That’s a good 15 minutes away with midday traffic, so I told her I needed to get my money back so I could take a taxi. She said I needed to go to the guy I bought my ticket from.

On my way I asked my two new friends if they wanted to split a taxi with me. The French guy said yes, but the ticket agent who was standing next to his manager said we couldn’t get our money back. When I turned to the manager and asked he said, sorry but I can’t do that. I felt like I just had been suckered and my blood immediately began to boil. I said, I was told the bus was going to leave in five minutes when I bought my ticket and you’ve been pulling my chain ever since. It’s now 1:25 p.m.

When the agent gave me attitude by saying take a look at the bottom of your ticket (my receipt was ripped but I guess it read “no refunds”), I said, you are messing with the wrong guy, and I quickly took a picture of him with my phone. As I was about to post it to my social networks (Twitter, Facebook, and Google+), he said, did you just take a picture of me? I said, I sure did. We had a few more choice words, but when he realized he really was messing with the wrong guy he asked, how can I make this situation better? I said, get me and the rest of the gang to the airport now or give us our money back.

To make a long story short, he dispatched a Super Shuttle van which must’ve been waiting around the corner on standby and said “come with me.” I made sure my new friends were included in the group he filled the empty van with. It turned out to be a good thing we took the van: the traffic on the highway was horrific but because we were in a van the driver was able to take back roads so we made it to JFK in just 30 minutes.

I got off at the first terminal the driver stopped at, which was Terminal 8, because his next stop was Terminal 1 and I was flying out of Terminal 7 (United). You can’t walk from Terminal 8 to Terminal 7 so I took the Air Train one stop and made my flight with time to spare.

-Don’t take NYC Airporter unless you see a bus about to depart and get verbal confirmation from the driver that they have room for you.
-Don’t accept the “it’ll be here in five minutes” answer without getting the exact details.
-Take photos and notes of those involved.
-Use social media.
-If NYC Airporter had not arranged for transportation or refunded my money I would’ve filed a complaint with the BBB and the City of New York.
-Stick up for your rights and those of fellow passengers.
-Keep cool, don’t say things you will regret.
-Don’t carry a gun

26 Comments On "Why I Won't Take NYC Airporter Again"