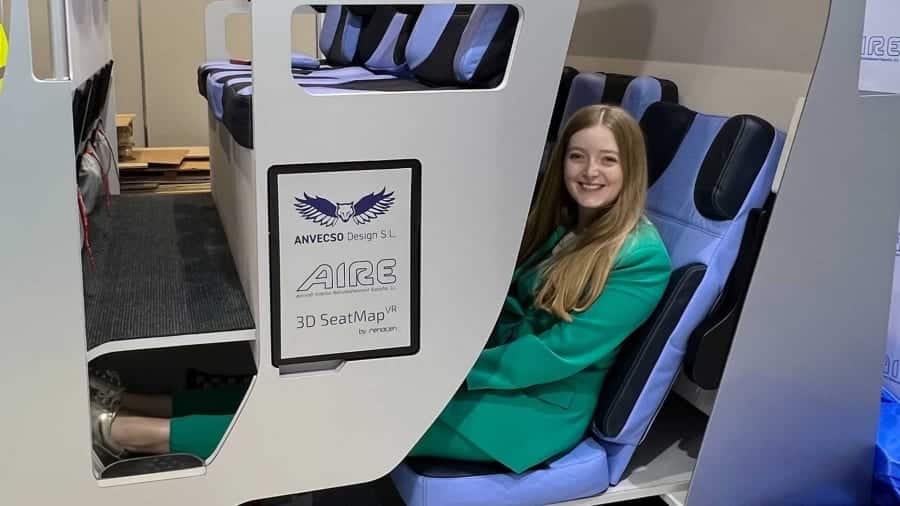 CNN’s Francesca Street is making worldwide headlines this week with her story titled “Here’s what it might be like to travel on a double decker airplane seat.” I’ve seen this story run everywhere from ABC News New York to 7News Sydney and if I had a dollar for every time a friend sent it to me, I could buy you lunch.

Francesca, who is in Hamburg for the AIX show (Aircraft Interiors Expo) featured Alejandro Núñez Vicente‘s Chaise Longue Airplane Seat concept. Alejandro, is from Madrid and went to school in the Netherlands but dropped out after getting a nomination in the 2021 Crystal Cabin Awards for his concept.

According to Francesca: “Since then, Núñez Vicente’s been making waves in the world of aviation. He’s paused his master’s degree to pursue the project full time. He’s in talks with big-name airlines and seat manufacturing companies. He’s been granted some hefty investment that’s allowed the project to develop.”

The double decker prototype seats are designed with “two ladder-like steps for travelers to use to access the top level.” There are no overhead compartments for storage. Instead, luggage would be the top and bottom levels of his seats.

Francesca writes: “It’s a little precarious, but once I’m up there, the seat feels roomy and comfortable, and there’s plenty of room for stretching out my legs.” According to Núñez Vicente, there would be about 1.5 meters (4.9 feet) separating the seated passenger from the top of the plane.

The top row seems totally doable except for older people trying to get up or down. However, the bottom row of seats is what makes me realize this will never be the future of air travel because they wouldn’t be able to evacuate the plane in the mandatory timely fashion that’s needed. And if they somehow figured that out then I could only see these seats being implemented in a few markets or extreme low-fare carriers as it would totally be claustrophobic for middle seat passengers.

Francesca comments that the bottom row of seats “does allow me to stretch out my legs, and there’s a foot rest for added comfort” because there’s no seat on the same level in front. Although she writes, “the other level of seats are directly above me and in my eyeline, it feels pretty claustrophobic. But if you don’t mind tight spaces, and you’re planning simply to sleep all flight, it could be an effective solution.”

I definitely would be open to flying on the top row but I wouldn’t want to be flying on the bottom or on a long-haul flight, would you?