10 Crazy Things I Saw on My Last International Flight 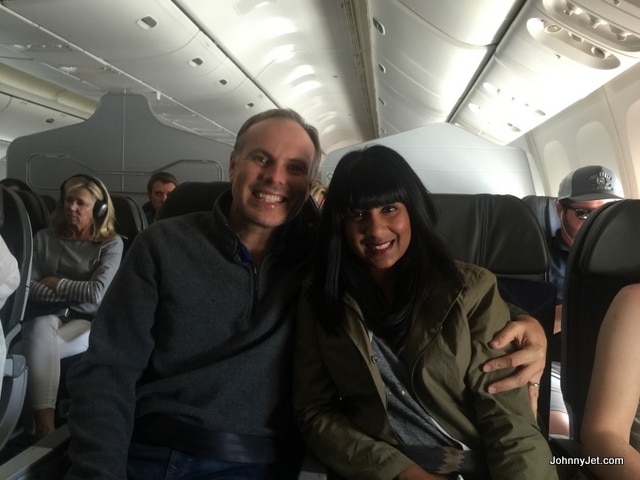 The other night, my wife and I flew from Los Angeles to London on American Airlines (story). We were seated in the first row of economy so it gave us a great vantage point to see all kinds of crazy things passengers do. So much so that my wife recommended I write a post on 10 of the crazy things I saw on my last international flight. I’m sure you’ve seen all kinds of crazy things too, so please share your stories in the comments below! Here are the 10 things I just witnessed, in the order I saw them happen.

1. Older guy screaming and yelling
As I was taking my seat, an older guy in his late 70s yells something to his wife like he was out of his mind, then roughly pushes the passenger in the aisle so he could get to the bathroom. I thought for sure he was going to be a problem and I would either end up restraining him over the Atlantic or we’d be forced to do an emergency landing in Iceland. Fortunately, he was well-behaved after my evil eye.

2. The nose picker
Our seat mate was a young adult (maybe early 20s) but when we saw him pick his nose and then eat it, we decided not to engage him in conversation. It was pretty off-putting.

3. Putting bags on top of others
The lady sitting directly behind me boarded the plane really late and then had to scramble to find overhead compartment space for her bag. The flight attendant offered to put it in Business Class but she insisted she wanted it close to her (which is smart). Then she just threw it in a bin that already had bags in it. She didn’t try and move them to the side but rather threw her suitcase on top of the bags that were already in there, no doubt crushing whatever was in them. Hopefully, nothing valuable was harmed due to her carelessness but that’s unlikely.

4. Passenger FaceTime-ing without headphones
An English woman, probably in her late 30s, took her middle seat across the aisle from me and started FaceTime-ing her boyfriend back in England and she’s doing it WITHOUT earbuds, speaking at full volume. I felt like ripping the phone out of her hands and throwing it down the jetway. But one can only dream.

5. Passenger gets up just before pushback
The woman behind me decided to get up right after the flight attendant said they need everyone in their seats for pushback. She didn’t give a sh*t. She needed to find her book and it didn’t matter to her if it meant our plane losing its departure slot.

7. Woman walking around business class carrying a large poodle like it’s a baby
After takeoff, the flight attendants put the curtain up between economy and business class, which is always a sad moment when you’re on THAT side of the curtain. At least it was see through so I could see them serve ice cream sundaes and good stuff like that. But the craziest was a woman who kept going into the bathroom with the oversized poodle she was holding like a baby. I love dogs but I ain’t taking one to the bathroom with me each time. I wonder if it was potty trained?

8. Drunk passenger
Towards the end of the flight, a passenger walked into the lavatory with one of those mini bottles of alcohol that they must have received from the flight attendant and then walked out looking for a place to toss it. Taking a nip behind the wife’s back? I have no idea. The worst part was that he eventually put it on the ground underneath the flight attendant’s jump seat instead of giving it to the flight attendant who was literally right next to him collecting garbage.

9. Not bringing a sweater
Even though it was 78F when we departed Los Angeles and it was forecasted to be 70F in London, when I saw my nose-picking seatmate walk on with just a tank top and no bag or sweater, I knew he was going to be bumming. I guess he didn’t realize that planes can sometimes be so cold that I end up wearing a winter hat in the summer time. I looked at him mid-flight and the guy had the blanket wrapped so tight I could see the outline of his tank top. I had to give him my blanket so he wouldn’t get frostbite. Planes get cold – especially by the window, even more so by the exit row.

10. Gabby flight attendant
The flight attendant across from me on takeoff and landing was super cool and she told me some crazy stuff (more later). But another flight attendant decided to stand in the aisle and talk to the woman behind me for 20 minutes in a super loud voice mid-flight while everyone was trying to sleep.

-Bonus: This isn’t something I saw by my new flight attendant friend told me that one of the craziest things she ever saw was a passenger wear diapers on a plane because they didn’t like using the germ-infested lavatory!