10 Reasons to Love the Palazzo Sasso

Palazzo Sasso is a 12th century Italian villa that was originally part of the aristocratic quarter of Ravello during the Middle Ages. It was opened by Sir Richard Branson in 1997 and today, the 5-star luxury resort ranks among the top 10 of the best hotels in the world! We recently had the pleasure of staying at the Palazzo Sasso and it was easy to see why they have received awards for the world’s best service and the world’s best hotels year after year. Here are our 10 reasons we loved the Palazzo Sasso and why you should want to stay there! 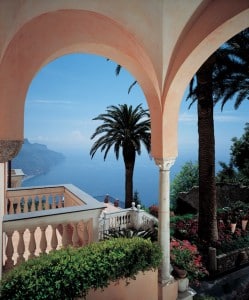 1. Location, location, location. “Ravello is closer to heaven than it is to the shore,” claimed André Paul Guillaume Gide, a French author and winner of the Nobel Prize in literature in 1947.  Ravello is the smallest and considered to be the quaintest and most exclusive of the towns dotting the Amalfi Coast. Palazzo Sasso is perched on a 1,000 meter cliff with postcard perfect views over the towns of Amalfi and Maiori and the azure Mediterranean stretching out as far as the eye can see.

Ravello was not overrun with tourists like some of the other towns, making it seem like we were in our own private world above the Mediterranean.

2. The View. I know I’ve already mentioned location, but the view warrants its very own place on my top 10 list. The hotel has 32 rooms and 11 suites; most are sea view. Even the gym and the heated pool (with underwater glass viewing window) have panoramic views of the Amalfi coast. When the weather is nice, breakfast is served on the terrace with sweeping views over the Mediterranean. But for the very best view, head up to the twin rooftop jacuzzis!

3. Service. It was truly all the little touches that made Palazzo Sasso nothing short of spectacular – from the sparkling wine and fresh fruit to welcome us to the bottle of limoncello thanking us for staying, we felt like we were guests in someone’s home. I don’t know how on earth the staff remember all the guests’ names, but it was impressive that we were always greeted by name.

Antonio Ferrara, the front office manager, was extremely knowledgeable on all things Ravello and is happy to point out Ravello’s hidden gems! It was at his recommendation that we dined at Cumpa’ Cosimo, visited the Museo del Corallo, and toured the Villa Rufolo.

Whatever the request, the staff will do everything in their power to accommodate it. It’s no wonder they were named #1 in Italy and #4 in the world for Travel and Leisure’s “The World’s Best Service” awards last year.

4. The bed. For as much as I love traveling, I dread the hotel bed. It’s never as comfortable as your own bed and some are downright impossible to get any rest in. Not at the Palazzo Sasso; I felt like Goldilocks and found a hotel bed that was just right!

But just in case the cotton bedding or the pillows aren’t to your liking, you can select satin or silk on your bedding menu card for a bedding change for the next night. 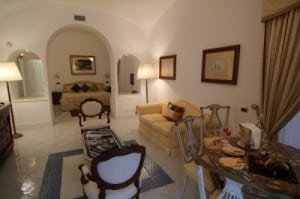 5. Rooms fit for a king. Staying at the Palazzo Sasso is about staying in grandeur and luxury. The rooms feature 17th and 19th century antiques, Vietri tiled floors, and bathrooms with Jacuzzi baths. We stayed in a suite with a beautiful view of both the sea and Palazzo Sasso’s private gardens.

6. Bvlgari toiletries. The bathrooms are stocked with Bvlgari shampoo, conditioner, shower gel, soap, and lotion. Don’t like the scent? Not a problem! Simply fill out your menu to select white tea, green tea, or red tea instead. 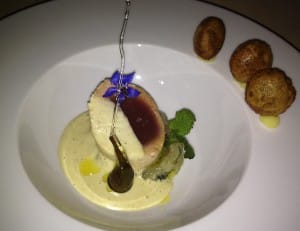 7. Rossellini’s. Rossellini’s is Palazzo Sasso’s 2 Michelin star restaurant where food literally meets art! Each dish was so  beautifully presented that we almost – almost – didn’t want to spoil the presentation by actually eating. But soon the allure of delicious smells wafting from the table was just too much. We recommend the tasting menu, on which our favorites were the Ahi tuna filet with caramelized capers and fried potato puree and the herb and cheese crusted rack of lamb with white asparagus and a leaf potato chip that we’re still talking about!

8. The art. Interesting works of art abound throughout Palazzo Sasso. Statues are tucked into insets along the hallways, glass cases display sculptures, and even the tables in the restaurant are adorned with Venetian glass. Take a walk to explore the Palazzo Sasso’s collection!


9. The history. The Palazzo Sasso owes its name to the prosperous Sasso family from Scala, who were descended from San Romoaldo, founder of the Cistercian order, and San Dominico Sasso, the successor to Saint Dominico who created the Dominican order. Another ancestor was the legendary Gerardo, founder of the Knights of Malta. The “Ravello” branch of the family was linked to Cardinal Ottavio, Governor of the Emilia Romagna region during the reign of Pope Pius the III.

Some of the original rooms remain, such as the entrance hall and a small bathroom used as a cellar in the restaurant. 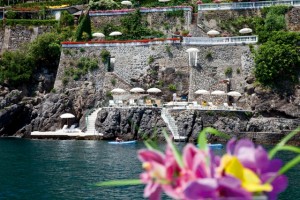 10. Sasso by the sea. Just a short 15 minute drive from the Palazzo is a private villa by the sea for hotel guests. There is complimentary access to the beach platforms for all hotel guests, a small swimming pool, the casual Sasso  Restaurant, changing rooms and relaxing living rooms.  A complimentary shuttle service is available starting from 10 am.

Note: We were hosted guests of the Palazzo Sasso and we appreciate their hospitality! Rates change by low, medium and high season with sea view queen rooms starting at €530 per night in the high season. 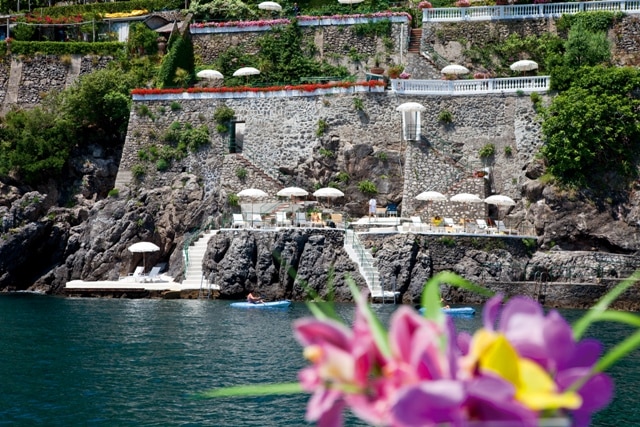 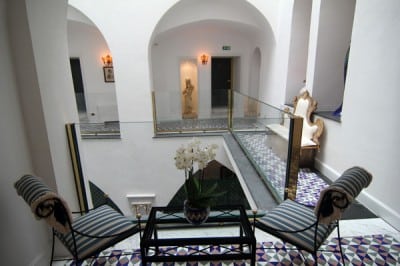 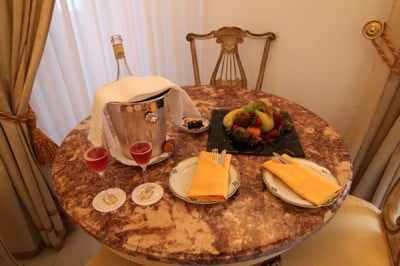 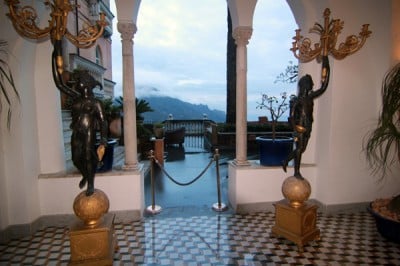 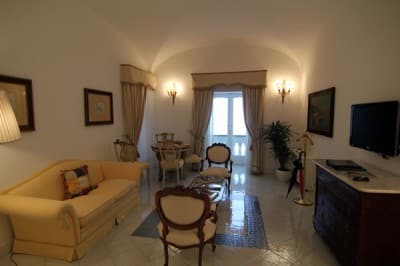 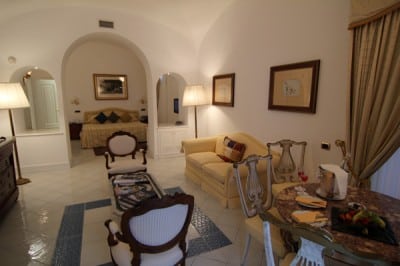 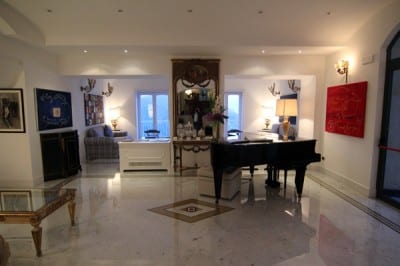 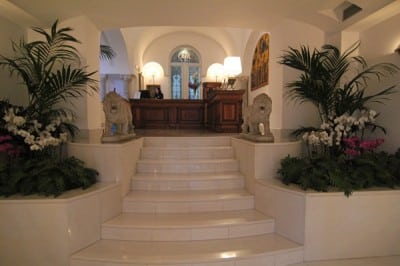 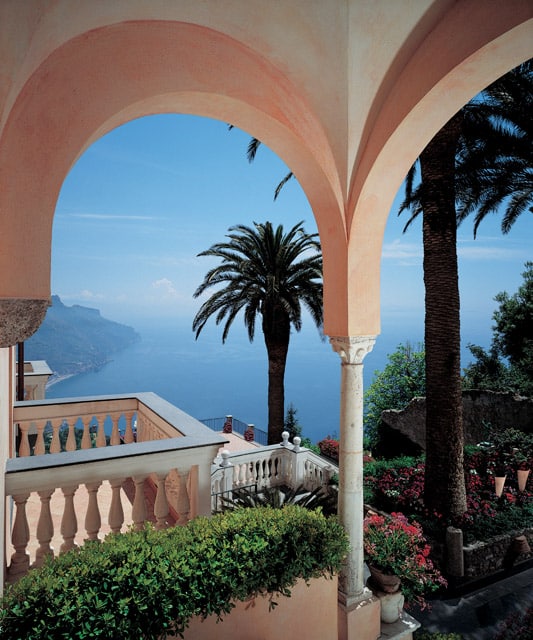 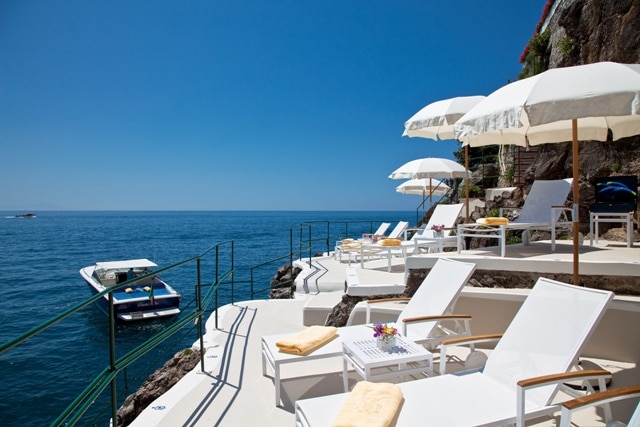 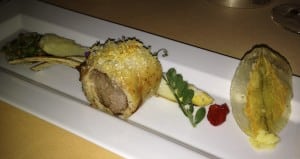