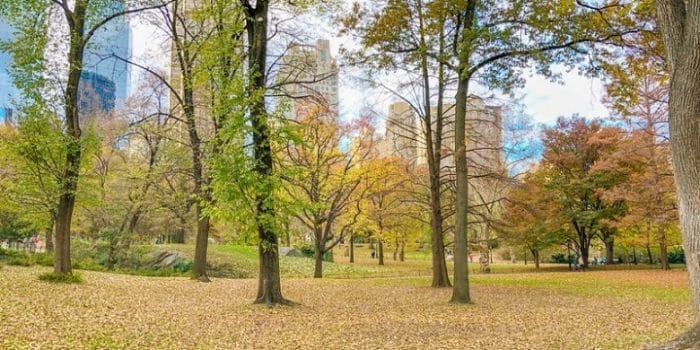 It’s almost October and that means readers across the country are going to start asking me how they can find cheap flights for Thanksgiving travel, for those brave enough to fly during COVID-19. The good news is that flights so far are a lot cheaper than last year. Here are 10 ways to find cheap Thanksgiving flights for you to see your family, for them to come see you, or for you to just get the heck out of Dodge!

Without a doubt, the key to finding cheap Thanksgiving flights is to be flexible (or any flights, for that matter). If you can’t be flexible, then you aren’t going to get a deal so you can stop reading right now. It’s not that difficult to figure out that the most expensive time to fly is when everyone else is, too. For example, Thanksgiving this year is on Thursday, November 26. I bet you want to leave the Wednesday (November 25) before and return on the Sunday (November 29) or early morning on the Monday (November 30) after. Am I right?

Well, that’s not going to happen and if you ran an airline, you wouldn’t discount fares that day either, would you? To prove my point, I just ran a flexible search on Google Flights (below) for roundtrip non-stop flights from New York’s LGA to Miami for a four-night stay. You can see that leaving on Wednesday and returning on Sunday are the most expensive days to fly. The roundtrip will cost over $271 (last year was $690!) and that’s for early morning or late night flights.

Solution: Travel a day earlier on the outbound and return a two days later and the price will drop by over 50%. See screenshot below. If you want to save even more money, push the dates even more.

According to Expedia: “For those planning to travel for Thanksgiving, Expedia recommends booking flights between 60-90 days out in order to take advantage of the current lower year-on-year prices. For December or Christmas travel, the sweet spot is likely 30-60 days out.”

According to AAA Travel, “with health and government officials stressing that staying home is the best way to protect yourself and others from getting sick, AAA anticipates at least a 10% drop in travel” AAA’s projected numbers are as follows:
-Travel by automobile is projected to fall 4.3%, to 47.8 million travelers and account for 95% of all holiday travel.
-Air travel volume will be down by nearly half of prior years to 2.4 million travelers. This would be the largest one-year decrease on record.
-Travel by other modes, including buses, trains and cruises, is expected to decline 76%, to 353,000 travelers, as cruise ships remain docked and more travelers opt for car trips instead of taking buses or trains.

2. Consider the time of day

Since everyone wants to leave after work or when school gets out, don’t enter in a specific time when searching for a flight. Generally, the most expensive times to fly are peak business travel hours (8am to 10am and 5pm to 7pm). Cheaper seats tend to depart early in the morning (5am to 7am), midday (noon) or late in the evening (after 8pm).

Good to know: By leaving early in the morning, you have the best chance of not getting delayed.

Another money-saving trick is to not only be flexible with dates and times, but also with airports, too. For example, rather than flying into (or out of) Miami when going to south Florida, check out Fort Lauderdale airport (FLL), which is 25 miles north and usually much cheaper. To see what I’m talking about, see the screenshot below. Flying from EWR to FLL on Wednesday, November 25, and returning on Sunday, November 29, the roundtrip price is $153. If you’re a family of four, it might be worth traveling an extra 25 miles to save $1,000. NOTE: These screenshots were priced out on September 18, 2020 so the prices will change so keep looking.

FYI: Almost all major U.S. cities have alternate airports and I created this page show you the actual driving miles.

4. Stay away from the low-cost carriers and Basic Economy fares

When you do a flight search, don’t just grab the cheapest fare you see, especially from a low-cost carrier (LCC), because it could end up costing you much more than you think. Allegiant, Spirit, Frontier and Norwegian are just a few that are notorious for offering ridiculously low fares and then hitting you up for money for everything from assigned seats, checked baggage and even carry-on luggage. The worst part is that now the legacy airlines like American, Delta and United don’t want to lose out so they’re now offering the same kind of fares. So make sure you read the fine print on your fare before buying—even from the mainline carriers.

Southwest was the original low-cost carrier so it’s ironic that they’re the only carrier that doesn’t charge for checked bags. They offer the first and second checked bag for free, which most airlines would charge an extra $160 for on a roundtrip ticket (most charge $35 for the first bag and $45 for the second). If you’re planning on checking bags and don’t have elite status or an airline-branded credit card where one of the perks is free baggage, then check to see if Southwest Airlines is flying your desired route. Remember: Their fares don’t show up in any search engines except for their own, so you need to search on Southwest.com.

If you don’t want to constantly have to check airfares manually (as I like to do for some insane reason), then sign up for fare alerts. Here are the sites that offer fare alerts for free.

7. Hold your airfares for free for 24 hours

Many consumers in the U.S. don’t realize that the Department of Transportation (DOT) has stated that all US and foreign carriers have to allow consumers the ability “to hold a reservation at the quoted fare for 24 hours without payment or allow a reservation to be cancelled within 24 hours without penalty.” See here for the DOT’s full rule (PDF). However, if you’re booking a ticket with fewer than seven days before you fly, this rule doesn’t apply.

Note: American Airlines is the only airline that I’m aware of that allows consumers to hold a reservation without a credit card for 24 hours, making it much easier to cancel. However, since American offers the hold option, if you make a reservation with them, you can’t cancel without a fee.

It’s almost impossible to use your airline frequent flyer miles during the holidays unless you are flexible with dates or are willing to use double or triple the usual amount. I don’t recommend the latter but one Thanksgiving, I used 12,500 American miles to get my wife from Los Angeles to Toronto the Friday after Thanksgiving.

As you can see, bargain-hunting can be a time-consuming process but it can pay off big time, especially if you are traveling with multiple people. If you don’t want to spend the time and energy doing all the legwork, then call a travel agent and pay their fee, which can be $25 or more. A good agent will find you the same deals you can find online and sometimes even better deals if they are clever with the ticketing (usually for international flights). To give you an example, once I was flying from London to Bangkok and everything I was finding online was over $1,000. I called my travel agent and he found a flight on Etihad through Abu Dhabi for $550. It was well worth the $25 fee.

The airlines do not like the hidden city trick even though you are simply beating them at their own game. With that said, it’s against airline policy so you didn’t learn it from me! Here’s how it works: Once I needed to get from L.A. to Charlotte and a one-way ticket was a whopping $550. I took my own advice and searched alternate airports and found a ticket to New York’s LaGuardia (LGA) for only $190. I noticed that the flight first was stopping in Charlotte and then connecting to LGA. What’s crazy is that the first flight was the exact same $550 flight I originally found.

I know it makes no sense since New York is further from Charlotte and you have to take two flights instead of one but that’s the airlines for you. If I’d wanted to break airline policy, I could have just gotten off in Charlotte and let my connecting ticket to LGA go to waste. If I had done that, I would have bought a one-way ticket, made sure not to check bags, got on the plane early so I didn’t have to gate-check a bag or put my mileage account number (since the airlines can take away all of your miles for breaking policy). Consult Skiplagged.com since they show you the hidden cities.

I hope this guide helps you find cheap flights and more importantly, allows you to spend the holidays with the ones you love.

Have your own tip? Email it to whitney@johnnyjet.com!
Want to see more tips? Click here for all 1,299!