Everyone always wants to know how they can find cheap flights. The truth is that there are always new websites and apps emerging to help you get the best deal, but the strategies don’t change that much from year to year. Here are my 17 ways to find cheap flights:

1. Be flexible
The key to finding cheap flights is to be flexible with your travel days. If you aren’t flexible, then you aren’t going to get a deal. It’s not that difficult to figure out that the most expensive time to fly is when everyone else is, too. For example, if you want to travel for Thanksgiving, I bet you want to leave the Wednesday before and return on the Sunday or early morning on the Monday after. Am I right? You aren’t going to get a deal on those days since the airlines have no incentive to offer them, so you should just stop trying.

Deals for Thanksgiving, for example, are always either the week before or the Sunday or Monday before (depending on the destination). To prove my point, I ran a flexible search on Google Flights (below) for a roundtrip non-stop flight from New York to Miami for a four-night stay. You can see which days are the cheapest to travel.

2. Consider the time of day
Everyone wants to leave after work and school so when doing your flight search, don’t enter in a specific time. Generally, the most expensive times to fly are peak business travel hours (8am to 10am and 5pm to 7pm). Cheaper seats tend to depart early in the morning (5am to 7am) or late in the evening (after 8pm).

Note: By leaving early in the morning, you have the best chance of not getting delayed.

3. Alternate airports
Not only do you want to be flexible with dates and times, but also with airports, too. For example, rather than flying into (or out of) Miami when going to South Florida, check out Fort Lauderdale Airport (FLL), which is 26 miles north and usually much cheaper. You can also check out West Palm Beach (PBI), which is another 49 miles away but PBI is usually pricier. To help you with all the major US alternative airports (by actual driving miles), I created a website called AlternateAirports.com. To see what I’m talking about, see the flexible search for flights from L.A. to San Francisco/Oakland below.

4. Consider making a stop
Sometimes booking a flight that has a connection as opposed to flying nonstop can save you money. See screenshot below for a flight from Los Angeles to Toronto. By making a stop, you can save hundreds of dollars.

However, not all connections have that much savings so you have to ask yourself if it’s really worth it. If it’s hundreds of dollars then yes, but if it’s just a $20 savings, do you really want to increase your chances of getting delayed or stuck? And be sure to avoid making connections in airports that have a terrible on-time track record like San Francisco, Chicago O’Hare or all of New York’s airports. Here’s a link to airport on-time performance reports to help you make a good decision.

When you do a flight search, don’t just grab the cheapest fare you see, especially from a low-cost carrier (LCC) because it could end up costing you much more than you think. Allegiant, Spirit, Frontier and Norwegian are just a few that are notorious for offering ridiculously low fares and then hitting you up for everything from assigned seats, carry-on luggage, refreshments (including water) and even to print your boarding pass. The worst part is that now the legacy airlines like Delta, United and American don’t want to lose out so they’re now offering Basic Economy Fares. My point is to make sure you read the fine print on your fare before buying—even from the mainline carriers.

6. Choose Southwest Airlines if you’re checking bags
Southwest was the original low-cost carrier so it’s ironic that they’re the only one that doesn’t charge for checked bags. They offer the first and second checked bag for free, which most airlines would charge an extra $160 for on a roundtrip ticket. If you’re planning on checking bags and don’t have elite status or an airline-branded credit card where one of the perks is free baggage, then check to see if Southwest Airlines is flying your desired route. Remember: Their fares don’t show up in any search engine except their own so you need to log on to Southwest.com. If you’re unfamiliar with the intricacies of baggage allowance rules across different airlines, check out this comprehensive baggage guide from AirHelp.

7. Search tools
Everyone knows there’s not one website out there that has the absolute cheapest price for airfares, hotels, car rentals, cruises, and package deals so the trick is to do your research and check them all to see who has the best deal at that moment in time. That’s one of the reasons why I created JohnnyJet.com to begin with.

We now have a new search engine where all you have to do is input your city pairs and dates and click “Check Rates.” Six windows will open up as they simultaneously search a variety of travel websites like Expedia, Priceline and TripAdvisor. It not only saves you time but money, as well. Check it out for yourself! I’m also a huge fan of Google Flights.

9. Buy two separate tickets to Europe
If you are traveling to a secondary destination like Sardinia in Italy it might be wise to break up the trip into two separate tickets. Several years ago, I needed to get from New York to Sardinia. When I priced out the tickets directly to Olbia (Costa Smeralda Airport), the airlines all wanted around $2,000 and I couldn’t afford that. I then figured out that by buying two separate tickets—the first to London on a major airline and the second to Olbia on a low-fare carrier—I saved over $1,000! Just make sure to leave plenty of time between flights (preferably a day), because most low-fare carriers usually depart out of secondary airports. And don’t forget to pack light because they have crazy baggage fees.

10. Hold your airfares for free for 24 hours
Many consumers in the US don’t realize that the Department of Transportation (DOT) has stated that all US and foreign carriers have to allow consumers the ability “to hold a reservation at the quoted fare for 24 hours without payment or allow a reservation to be cancelled within 24 hours without penalty.” See link to the DOT’s full rule (PDF). However, if you’re booking a ticket with fewer than seven days before you fly, this rule doesn’t apply.

Note: American Airlines is the only airline that I’m aware of that allows consumers to hold a reservation without a credit card for 24 hours, making it much easier to cancel.

11. Use frequent flier miles or credit card points
It’s almost impossible to use your airline frequent flier miles during the holidays unless you are flexible with dates or are willing to use double or triple the usual amount. I don’t recommend the latter but last Thanksgiving, I used 12,500 American miles for my wife to fly from Los Angeles to Toronto the Friday after Thanksgiving. If we’d left on the Sunday or Monday, it was double.

12. Speak to a human
You never know if an airline representative can find a better deal but in my experience, it’s usually only worth it (most charge a $25 fee) when booking a mileage award ticket since they can check partner airlines and alternate cities much quicker. To get in touch with your airline, I created AirlineNumbers.com, which lists all of the airline’s phone numbers and websites.

13. Consult a travel agent
As you can see, bargain hunting can be a time-consuming process but it can pay off big time, especially if you are traveling with multiple people. If you don’t want to spend the time and energy doing all the legwork, then call a travel agent and pay their fee, which can be $25 or more. I check with my travel agent but usually only on international flights since sometimes he has different inventory than the travel sites. To give you an example, once I was flying from London to Bangkok and everything I was finding online was over $1,000. I called my travel agent and he found a flight on Etihad through Abu Dhabi for $550. It was well worth the $25 fee. I also have a travel agent that can save me over 50% on international business class tickets.

14. Hidden cities
This hidden city trick is against airline policy so you didn’t learn it from me. But—once I needed to get to Cleveland from LA and a non-stop one-way ticket was $600. I took my own advice and searched alternate airports and when I found a ticket to Buffalo for only $230 I noticed the flight first stopped in Cleveland ON THAT EXACT SAME $600 flight. I know it makes no sense since Buffalo is farther from Cleveland and you have to take two flights instead of one but that’s the airlines for you. If I’d wanted to break airline policy, I could’ve just gotten off in Cleveland and let my connecting ticket to BUF go to waste. If I had done that, I would have bought a one-way ticket, made sure not to check bags or put in my mileage account number. Remember, I’m not recommending this and if you do it a lot you WILL get caught. Consult Skiplagged, which shows you the hidden cities.

15. Sign up to newsletters
To find the best deals, you need to be in the know and that means you need to sign up to as many newsletters as possible. I subscribe to the newsletters of almost all the airlines, hotels, car rentals, cruise lines…  If you don’t want your inbox inundated, then just sign up for a few. Besides subscribing to my deals newsletter. 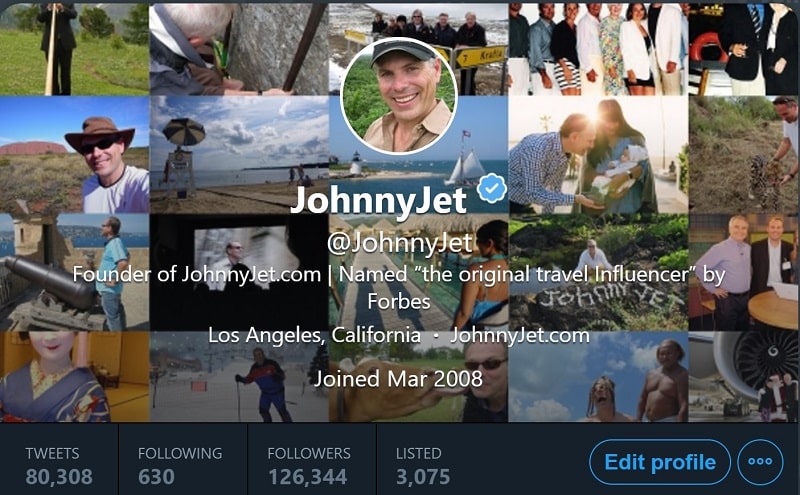 16. Use Twitter
A big misconception of Twitter is that you need to share your information, but you don’t! If you want to be the first to know about sales, then follow the airlines and more importantly, follow industry experts and aviation enthusiasts to be informed of advertised and unadvertised fares. 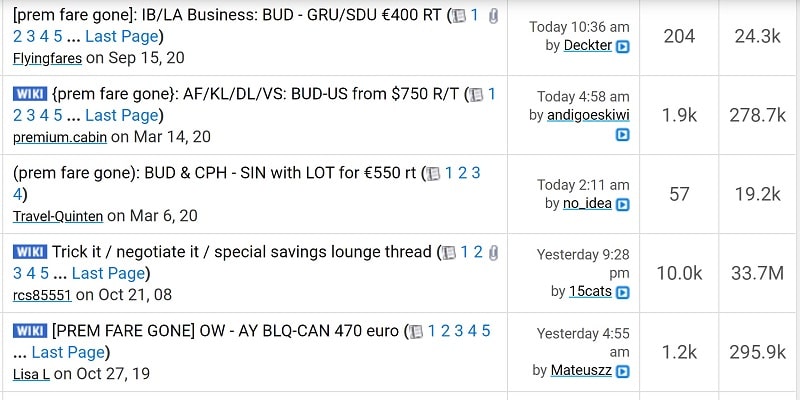 17. Monitor Flyer Talk Message Boards
Want to find the absolute cheapest fares? I’m talking Boston to San Diego for $20! Then monitor FlyerTalk’s message boards, especially the forum “Mileage Run“, where you will find frequent flier junkies sharing airline “mistake” fares (where the airline’s pricing analyst accidentally types in the wrong price). You will need to visit often as the fares typically only last a couple of hours at best. But you could score yourself one heck of a deal!

So there you have it … I feel like you have just turned me upside down and shook all the tricks out of me. I hope this guide helps you find cheap flights and more importantly, motivates you to see the world and visit the ones you love.