20 Reasons to Stay at the Ocean House in Watch Hill, Rhode Island 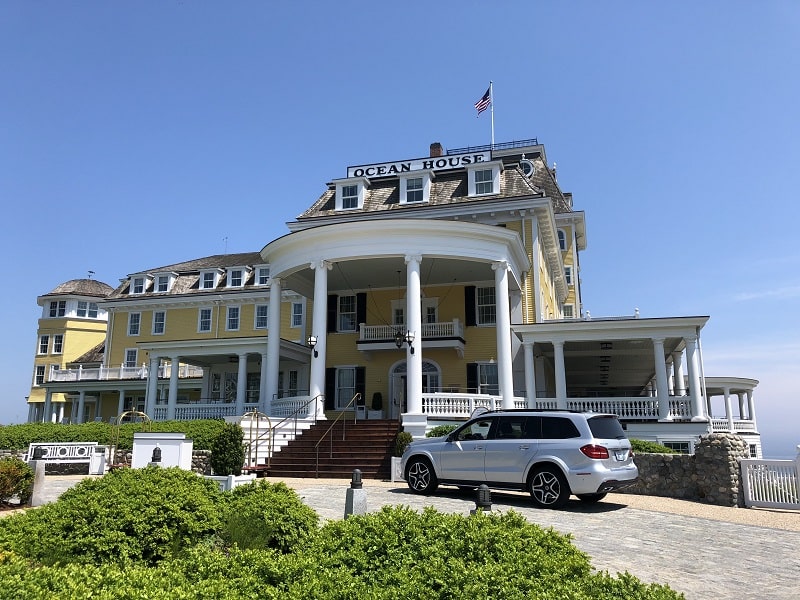 I grew up in South Norwalk, Connecticut (42 miles from New York City) and since I come from a relatively large family and back then, flying was so expensive, we rarely flew anywhere for our family vacations. Instead, my parents packed up our Brady Bunch-esque station wagon and we drove. I was the youngest so I was always in the way back with the luggage and the dog. 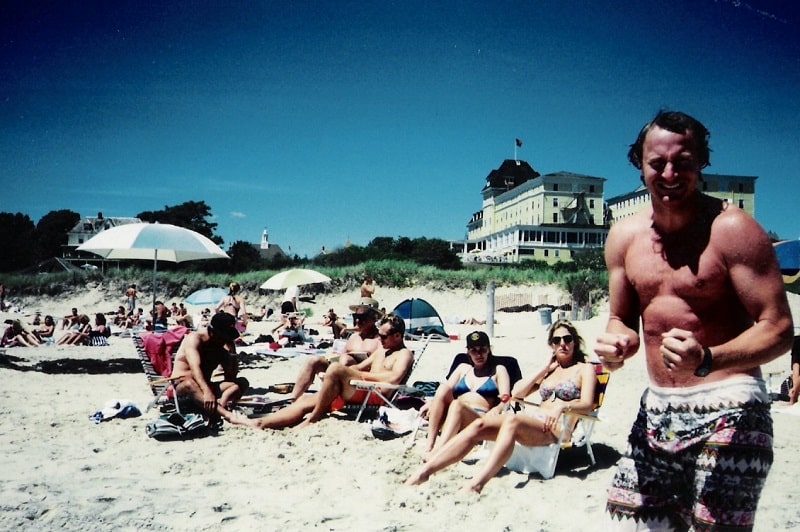 My family’s favorite place to spend a long summer weekend was Watch Hill, Rhode Island. It’s just a 90-minute drive from Norwalk (and from Boston) but feels like a world away.

Anytime I ever mentioned Watch Hill to friends, they would always ask if I’d ever stayed at the Ocean House. Yes! The Ocean House is a large, Victorian-style waterfront hotel that originally opened in 1868 and really stood out since it was painted yellow and located atop a hill. The Ocean House is where we made our fondest family vacation memories but we stopped going after my mom passed away in 2000.

In 2003, the original Ocean House closed down and there were rumors it was going to be knocked down to make way for individual houses. My family was heartbroken but the town and some determined past guests fought hard until they found a developer that would save the hotel and our memories.

In 2005, the hotel was knocked down so they could start from scratch. My mom would’ve been happy since towards the end, she thought the hotel was a fire trap so she never slept well. The developers rebuilt the Ocean House to look just like the original, at least the front side. The new design is 50,000 square feet larger and it opened in 2010.

It’s now open year round and has 49 hotel rooms and 23 residential condominiums. There’s a lot to love, which is why I created this list of 20 reasons to stay at the Ocean House in Watch Hill, Rhode Island. 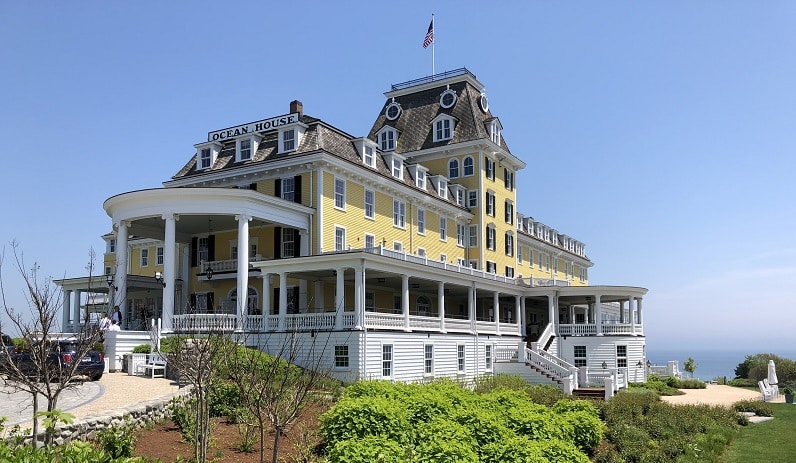 1. It’s modelled after the original
As I mentioned above, the hotel entrance is identical to the old. And they even rebuilt the original fireplace stone by stone; they numbered them all so it would be exact. 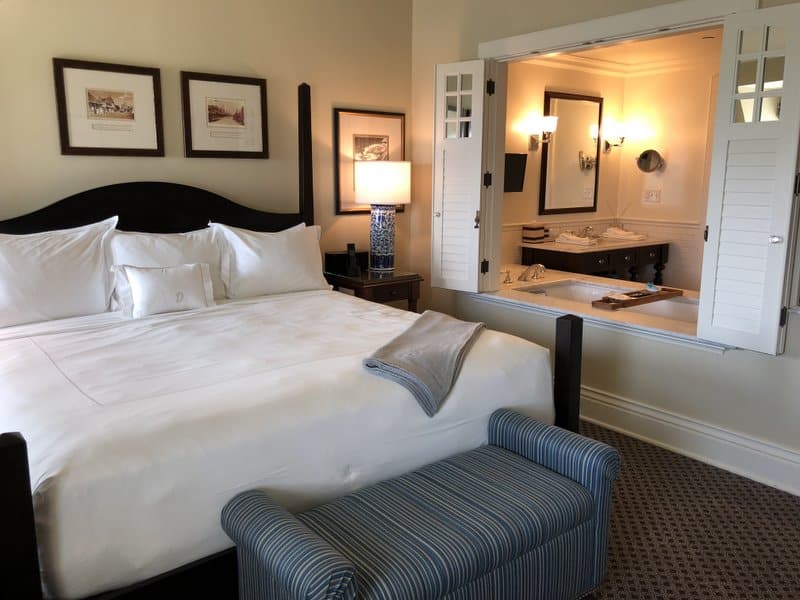 2. The rooms are luxurious
Unlike the old hotel, the floors don’t creak and there’s no smell of old wood. The beds and sheets are extremely comfortable. 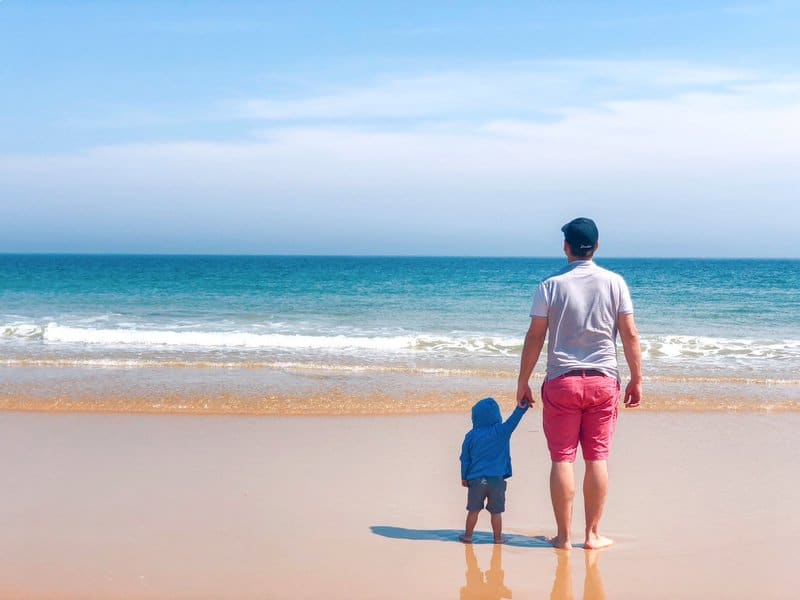 3. It’s on the beach
The sand is surprisingly so soft and clean that I never would have guessed that I was in New England. It’s nicer than the sand we have in southern California. The only problem is the water is really cold and doesn’t warm up until July and August. 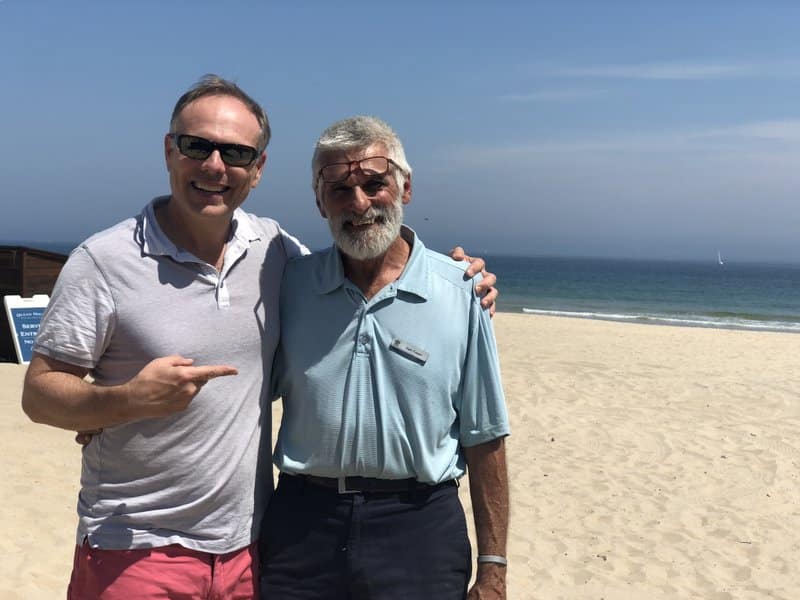 4. Sam the lifeguard
One reason the sand is so amazing is that they have the original hotel’s lifeguard, Sam Fusaro. He’s been there for over 50 years and they have a plaque highlighting this fact. Sam’s a special man so I’m happy the hotel recognized that. 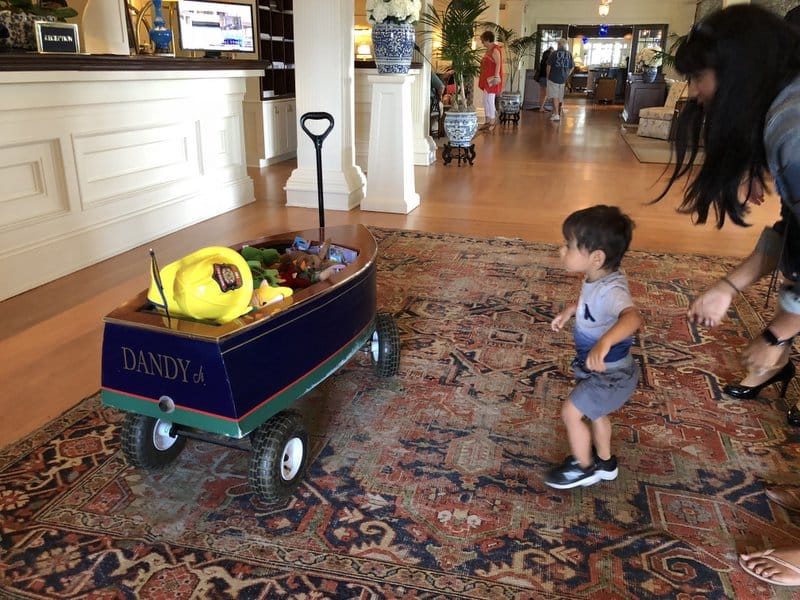 5. It’s family-friendly
When we checked in, the hotel staff wheeled out a mini sailboat filled with kids toys so Jack could choose one. 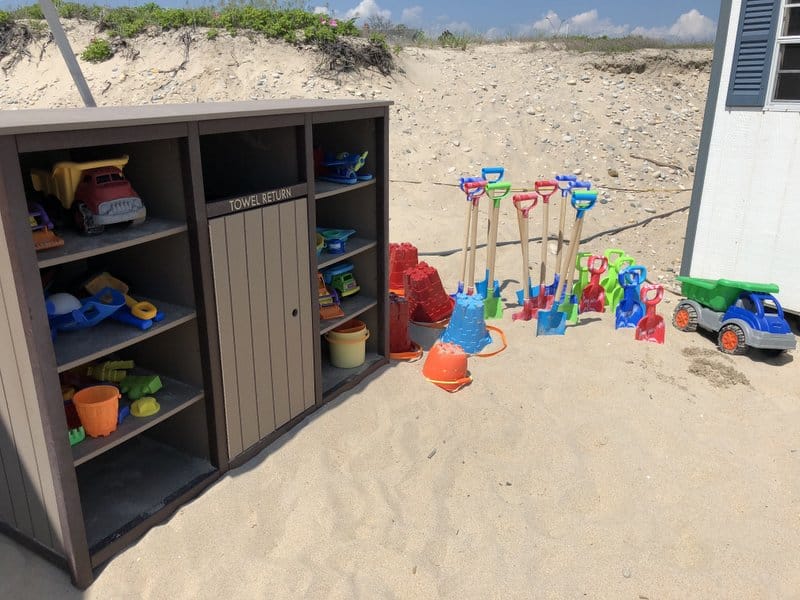 6. There are kids toys on the beach
I bought Jack some beach toys but when we arrived to the beach, the hotel had much bigger and better buckets, shovels and toys. Jack was in heaven. 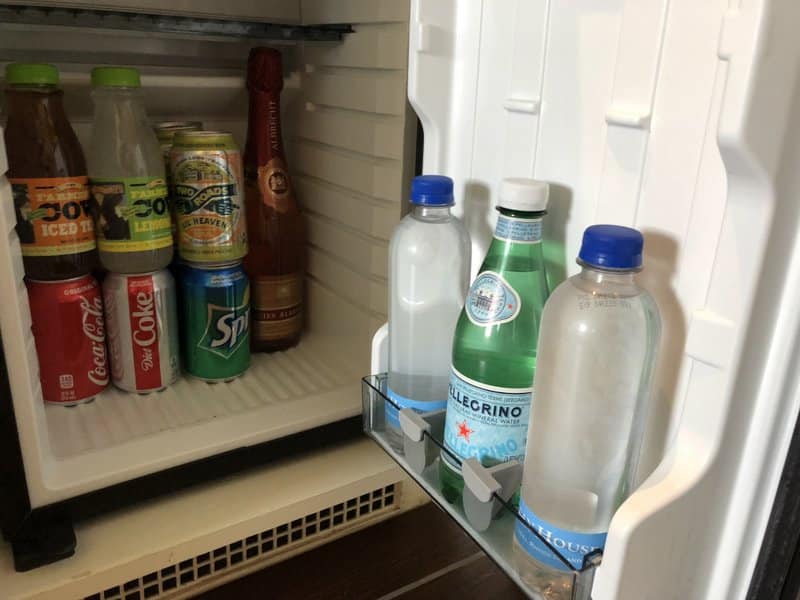 7. Free mini bar
Usually when you see a hotel mini bar you know to stay as far away from it as possible because it’s always overpriced and has sensors. Well, here, it’s included in the price of your stay and they refill each day. My favorite were the chocolate malt balls, local iced tea and lemonade, and the Macintosh apples. 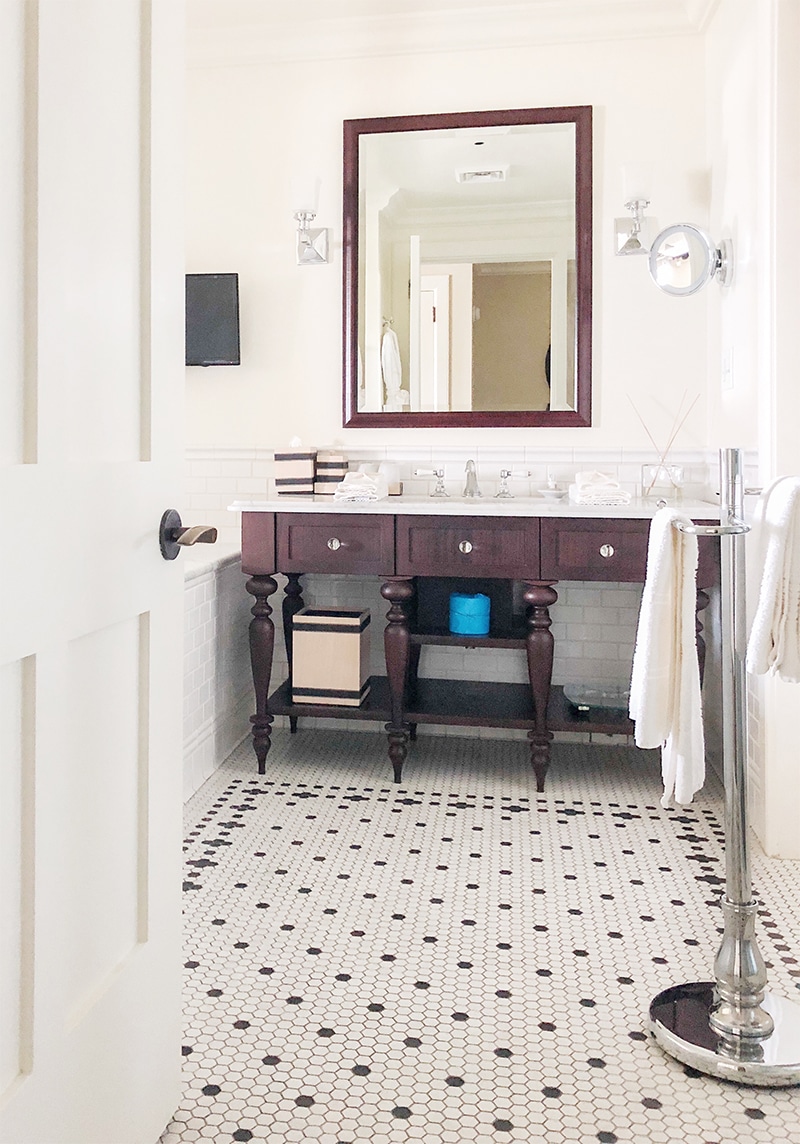 8. Beautiful bathrooms
My wife walked in and the first thing she said is that this is her dream bathroom. It’s mine too since it has a deep soaking tub, separate shower with excellent water pressure and a stone floor, Molton Brown toiletries and a mini TV built in the wall so I could take a bath and watch the Yankees game. 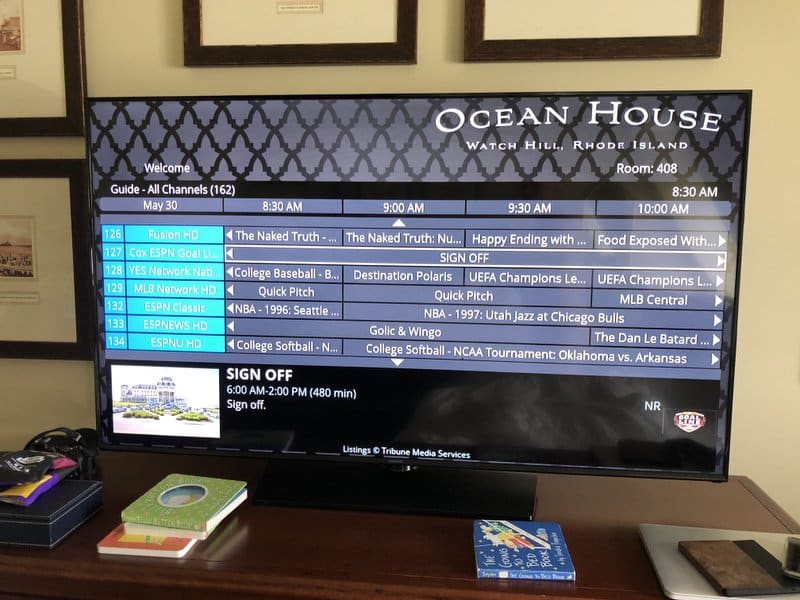 9. A large TV with tons of channels
I usually don’t highlight a TV since every hotel now has a large flat screen but this one deserves some attention because it has tons of channels including the YES network, which airs the New York Yankees games. I have a feeling the owner must be a Yankees fan since Rhode Island is Red Sox country. 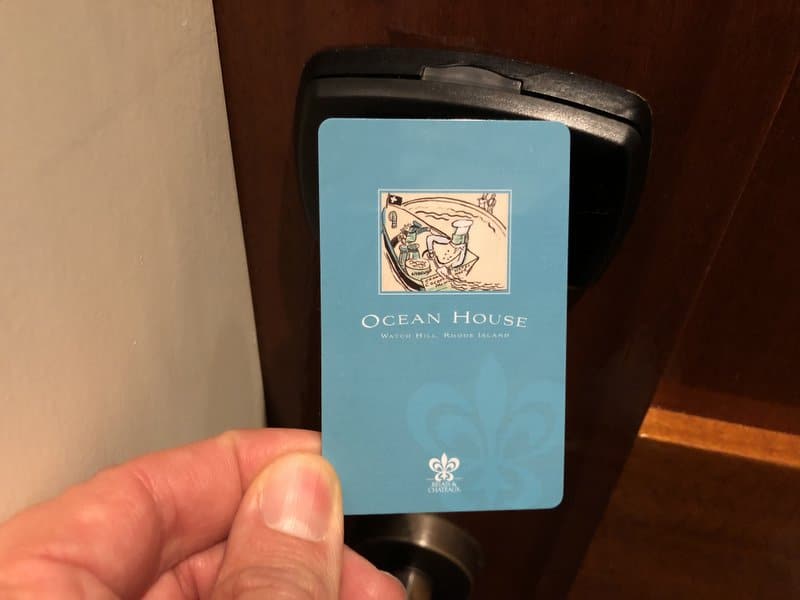 10. The walls and doors are solid
One of my pet peeves with hotels are thin walls and doors, especially in the bathrooms. Here, all walls and doors are solid. The ceiling not as much. In fact, while lying in bed, I could hear footsteps above. I thought that was strange since we were on the fourth floor, which is the highest the elevator went so I started wondering if the hotel was haunted like the old one. FYI: My siblings used to beg the night watchmen to tell them ghost stories and to take them up to the third floor since in the 80s and 90s, it was closed and definitely haunted. But then I remembered the hotel has condos too so it was a resident that was above us, not Casper. 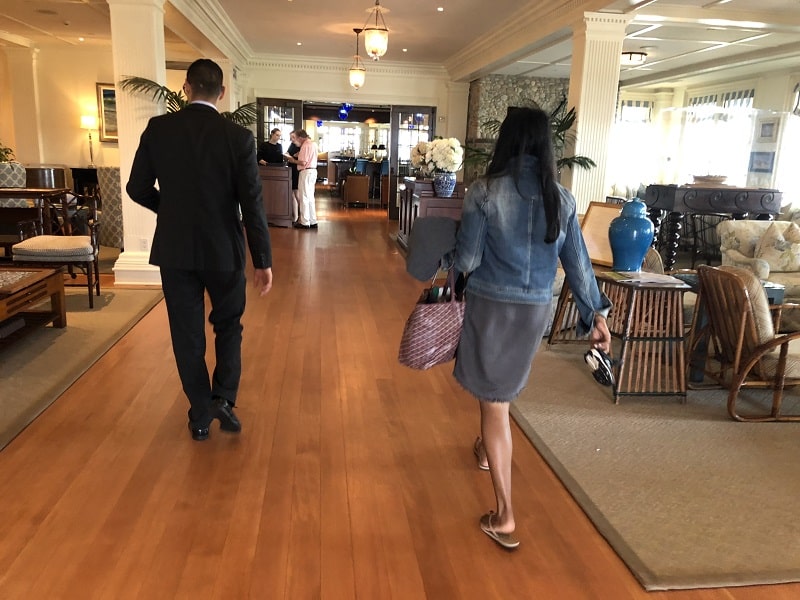 11. International staff
Growing up, the hotel was open only in the summer and employed all locals, mostly college kids. These days, much of the staff come from overseas so you will hear all kinds of accents. They could use some more staff as I called down three times to get our pull-out couch made so Jack could go to sleep and this is after I had the green light for the maid on for over two hours.

12. Bell hops are super friendly and attentive
The most attentive staff at the hotel were the bellhops and valets. These young guns pounce on cars when they pull up and they wouldn’t even except a tip. When you leave, they put cold bottles of water in the car and you don’t even have to ask.

13. No tipping
As you can tell from reason number 12, there’s no tipping. I tried to hand the bellman some cash and he kindly declined and said they’re not allowed to accept tips. He seemed almost stunned I didn’t know the policy. 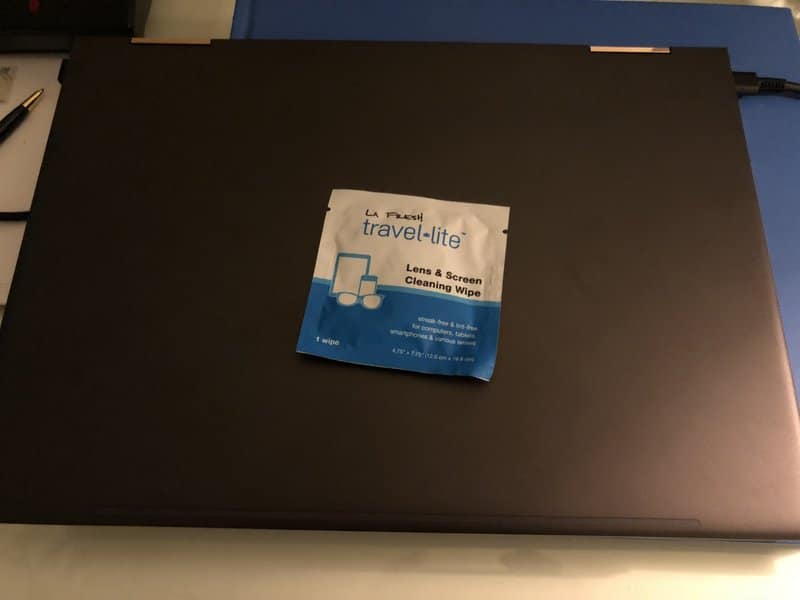 15. Housekeepers leave goodies
I was very impressed when I noticed that the housekeeper had left lens cleaners on my laptop and next to my reading glasses. They also left the hotel spa’s branded lip balm by my bed, which I appreciated. 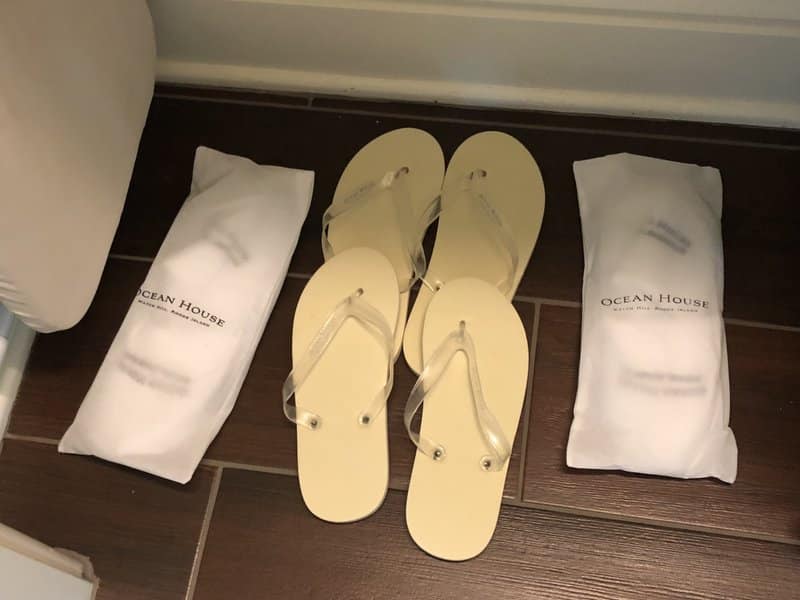 16. The little things
The hotel does a lot of little things right like the housekeepers leaving the lens cleaners and lip balm. But in addition to this, the closet had his and hers flip flops along with slippers. The men’s spa had reading glasses, which I’ve never seen before. It’s small details like these that make people keep coming back. 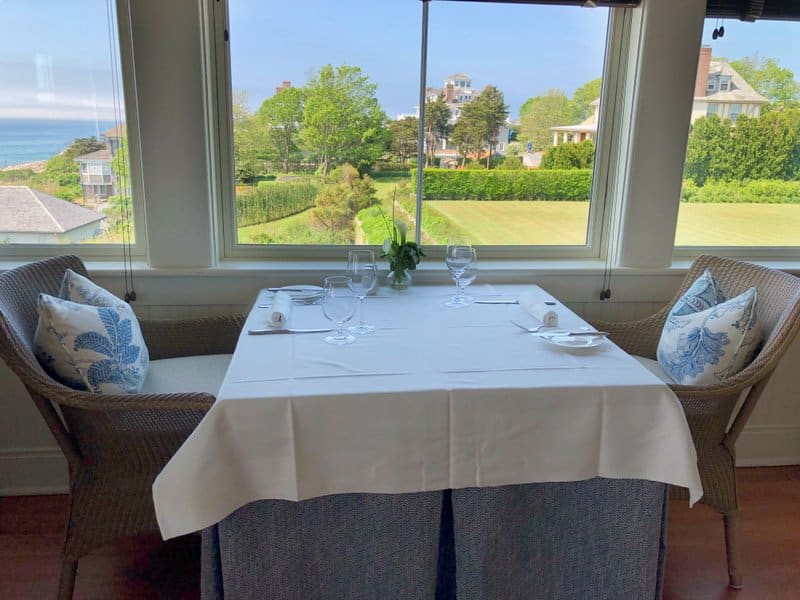 17. Dining
The Ocean House has two restaurants: One is fine dining with incredible views, which reminded me of the old hotel and the other is a bistro that’s basically a dining room inside a dining room. The food is good but it’s a little weird in the bistro because they shut the blinds so it’s really dark and you can’t enjoy the view. I guess it’s to make the fine dining restaurant more exclusive. Last year, my wife, son and I visited the hotel on our way to Boston so we could check it out and to enjoy hot lobster rolls on the deck. Unfortunately, the hotel doesn’t offer lobster rolls until the summer season begins (June 1 and we were there May 31), which was a big shame since we were really looking forward to them. However, my wife said that the hotel’s chocolate croissants were so good that they made up for it. 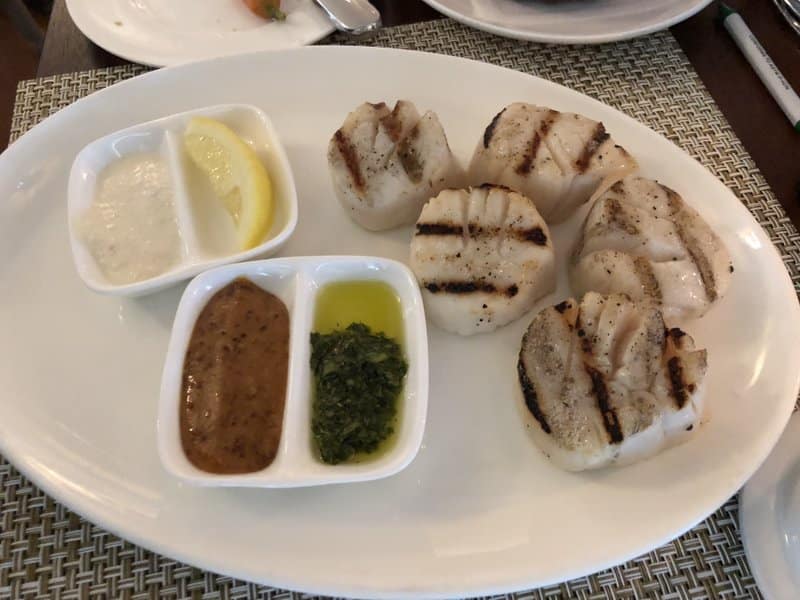 18. They take food allergies seriously
When our waitress asked if we had any allergies, we told her that Jack was allergic to a couple of things. They didn’t mess around. The chef sent her back to our table multiple times just to make sure that the food he was preparing would be safe. That’s never happened anywhere before. 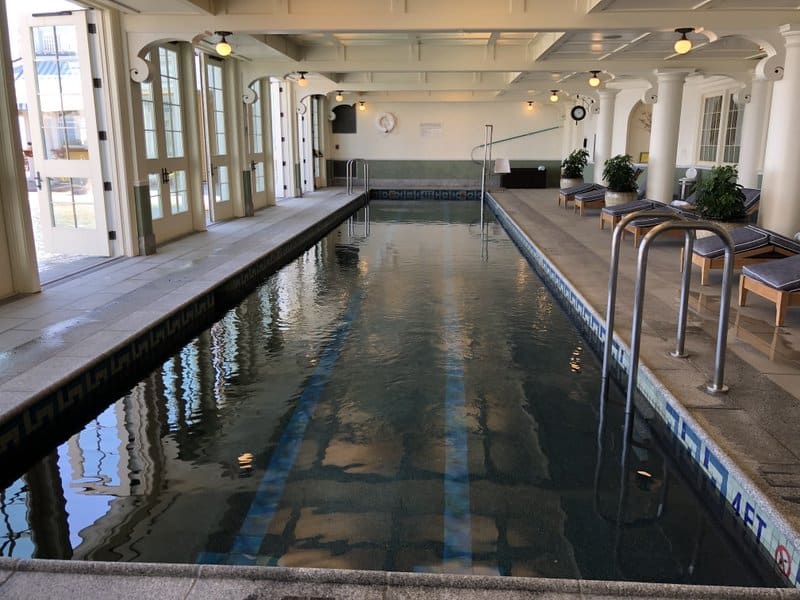 19. They have a pool, gym and spa
Unlike the old Ocean House, the new one has a pool, gym and spa. The pool is indoors so you can use it year round and it’s located next to the spa and gym. My wife treated me to a massage for my birthday, which was a nice surprise but the spa staff does a hard upsell, which I didn’t appreciate. Luxurious spas shouldn’t be trying multiple times to upsell their customers to use a better oil, or harder pressure or whatever else they were selling. 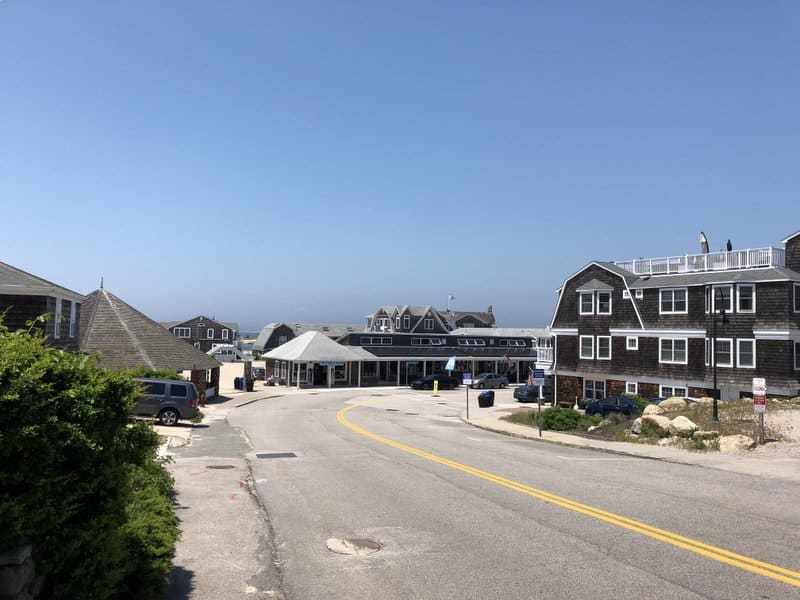 20. It’s a short walk to town
Watch Hill is a sleepy coastal village that is dead in the winter but really comes alive in the summer. From the Ocean House, it’s just a five-minute walk to the well-preserved Victorian seaside resort area that’s listed on the U.S. National Register of Historic Places. It consists of all independent boutique shops, a deli, a couple restaurants, hotels and an 1876 merry go round called The Flying Horse Carousel. A local favorite is the St Clair Annex, which has been family owned and run since 1887. Make sure you get an orangeade and an ice cream. 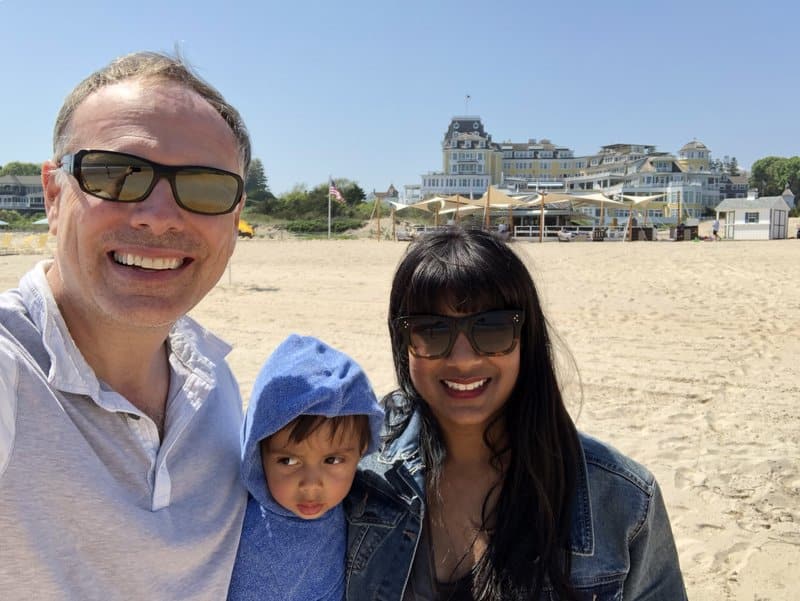 As you can tell, we really enjoyed the Ocean House. We would’ve stayed longer or gone right when it opened but it’s really expensive. Summer rates begin at $800 a night. Even my media rate was pricey. Even though the hotel is stuffier and much more pretentious than it used to be, I really hope we can make this our annual family trip and continue the family tradition my parents started so many years ago.

5 Comments On "20 Reasons to Stay at the Ocean House in Watch Hill, Rhode Island"