20 Stops to Make on a Cape Breton Road Trip

Nearly three decades ago, as a speechless baby, I was couriered by CAT ferry from Bar Harbor (Maine) to Nova Scotia. I cried from beginning to end. Among the things I did not know at the time was that people, and especially people of traveling persuasions, desire to visit Nova Scotia in the summer. Not a square foot in the province—Canada’s second-smallest—is more than 50 miles from the Atlantic. Bucolic walks splinter by the dozens up and around a mightily swollen coast. Year-round, celidhs—traditional “kitchen parties”—roar with life.

I came to appreciate all this in my adult years on a looping summer road trip around Cape Breton, the mitten-shaped island of Nova Scotia’s northeast. It comprises about a fifth of the province’s total land area. Cape Breton is also home to the world-famous Cabot Trail, named over the years among “49 journeys that’ll change your life” (CNN), the “world’s top 10 coastal drives” (Toronto Star) and the “world’s 10 most beautiful highways” (FOX News). Georgie Jet wrote about it last week.

For a June trip, you cannot do much better than Cape Breton. Rent a car in Halifax (the Nova Scotian capital) and follow the trickling highway system 2.5 hours northeast via Highway 104 to the Canso Causeway—gateway to Cape Breton. From there…


The Red Shoe Pub, Mabou
There’s no place on Cape Breton more welcoming than Mabou’s cozy Red Shoe Pub. Grab a clam chowder and a pint of Alexander Keith and toast your arrival in the smiling company of kindred, seaward souls. Return for live music any night of the week.


Mabou Farmers Market (Sundays only), Mabou
Every summer Sunday from 11am to 2pm, treasures of the local sea and land fill stalls at the Mabou Farmers Market. The Mabou Athletic Centre is the place to find hand-knit sweaters, local honeys and syrups, buttery baked goods, fresh-caught fish, originals from regional artists, and more. If you like oysters, try Sam’s Point Oyster Co.

Glenora Inn & Distillery, Glenville
OVERNIGHT POSSIBLE
In Latin, Nova Scotia means “New Scotland,” an allusion to regular Scotland’s claim to the territory in the 17th century. The French later stepped in to trade fur and such, and two-plus centuries later the cultural air contains notes of both lines of lineage. From the Scottish camp, that includes good Scotch-style single-malt whisky. Glenora Distillery‘s Glen Breton Rare is good enough to have been anointed among Scotsman Ian Buxton’s “101 whiskies to try before you die.” The house uisce beatha is the highlight of the hourly (9am-5pm, on the hour) tour, which runs $7 a head. For $130/night, you can drink more and stay through morning.

The Battle of the Glen: The Scottish Whisky Association once brought a lawsuit against Glenora for its use of the word “Glen” in Glen Breton Rare. A long saga involving several appeals concluded with Glenora winning the permanent right to the name in 2009. Glenora’s Battle of the Glen is a 15-year single-malt honoring the lawsuit’s defeat.
||
10 minutes via the Ceilidh Trail/19N
||


Cabot Links, Inverness
OVERNIGHT POSSIBLE
Atop cliffs of sharp grey rock, Cabot Links is the extraordinary hosting resort of two—two!—of the world’s 100 best golf courses as ranked by Golf Digest: Cabot Cliffs (#9) and the slightly older Cabot Links (#43). To play both, and/or to battle each again amid sometimes-fierce winds, you can shack up in one of the 72 beautiful rooms (from $195 CAD/night) of salt-tinged cedar, clean lines and Atlantic views. 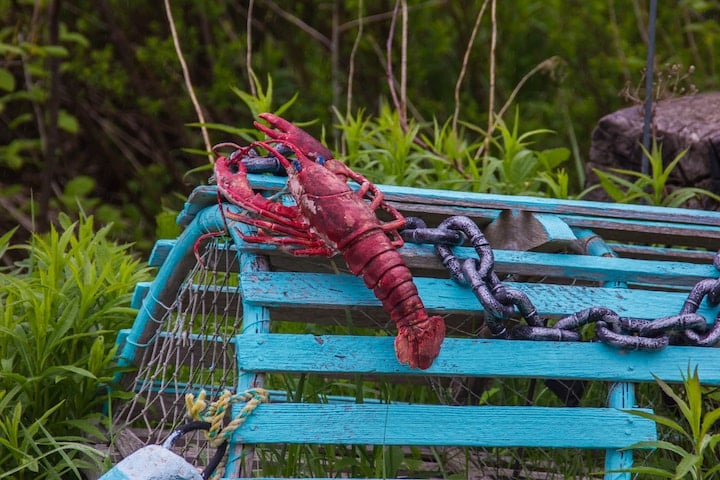 Lobster Pound Bistro, Belle Cote
OVERNIGHT POSSIBLE
The hefty lobsters populating Nova Scotia’s clean waters are packed with flavor and should not be missed absent serious shellfish allergies. Dinner at the on-site lobster pound at Island Sunset Resort (in season) centers around a full buttered lobster, sides of green and beige, and a salt-water-drenched tour of the waterside machinery of lobster consumption. Cottages can be stumbled back to for as low as $180 CAD/night.

Mi-⁠Carême Interpretive Centre, Grand Étang
Tucked against the western shoulder of Cape Breton, miles past where Route 19 bends east and the Cabot Trail takes over, is the Mi-⁠Carême Interpretive Centre, an intimate workshop and dress-up barn celebrating the Acadian tradition of Mi-⁠Carême (like a sister of Mardi Gras). Our Cape Breton insider once described the center with, “Gah! Just go, if I tell you too much I’ll spoil it for you.” Entry is $5/person, while the stillness of the lobster-trap-dotted Atlantic outside is free.

The Skyline Trail is 7.5km (5 miles) of shimmering green beauty. It’s likely the highlight of the park, at least for muscles of average efficacy. Two to three hours will get you to the bumpy highlands at the water’s edge, where a plunking boardwalk escorts new arrivals to heavenly outcrops battered by salty winds. It’s a must on a dry day.

Captain Mark’s Whale and Seal Cruise, Pleasant Bay
Pleasant Bay is a short drive north of the park, but not in spirit. In 28-foot zodiacs, Mark and Tina of Captain Mark’s Whale and Seal Cruise pursue whales and dolphins against a backdrop to remember: the dramatic rocky seam where Cape Breton Highlands National Park meets the sea. The geometry is jaw-dropping. Weaving through effervescent marine life, with the agility of a superpowered inflatable, is a great way to spend two hours ($40 CAD/person).

More hikes, Cape Breton Highlands National Park
In the park, water, sun protection, walking shoes, and time are more important than carefully curated trail plans. Hit the Skyline Trail, and from there let the land and park signs lead you for good results. The Parks Canada website has a helpful and difficulty-coded guide to trails in the park. That said, a few highlights:

North River Kayak Tours, Baddeck
Cape Breton’s hundreds of miles of rocky coast are lapped at by crystal-clear, heavily birded waters. In the summer, a kayaking trip ($69 CAD for a half-day) can be a gateway into many more adventures. Just drive your kayak into a desired shore and walk around a bit. North River Kayaking‘s guitar-playing founder (Angelo) bring charisma, bearings and what I recall as buttery homemade scones to the fold.

Alexander Graham Bell National Historic Site, Baddeck
The inventor of the telephone—and one of history’s more underappreciated polymaths—adored Cape Breton. At the Alexander Graham Bell National Historic Site, Bell’s work and humanity are presented in the delicate light of the environment that nurtured him into one of history’s great characters. I don’t love all museums, nor all homes of historic figures, but this one was a pleasure to explore. The White Glove Tour ($12.27) lets you get truly hands-on.

The Bite House, Baddeck
The Bite House is a 12-seat restaurant serving locally foraged flavors inside an old farmhouse Thursday to Sunday, May through December. Chef Bryan Picard’s legendary and reasonably priced ($70) tasting menus turn over five new courses each month, and reports of disappointment are near impossible to come by. It’s Cape Breton’s, and maybe Nova Scotia’s, best meal. Reservations for 2019 are available starting January 5 (email [email protected] or see more on the site).

Inverary House, Baddeck
OVERNIGHT POSSIBLE
The Inverary House survived a fire in its main lodge this summer and lives on to welcome guests, as it has for the past 70 years. Set across 11 acres of rolling green are snug cabins with flat-screens and Wi-Fi, fire pits, and possibly a friendly, romping dog. All look over the glassy Bras d’Or Lake. The house burger, which may or may not have before this summer been cooked in the cabin lost to fire, is a good one.

I know it’s not your birthday, but I just love ya *so* much Nova Scotia, I decided it was time you got the good stuff. All of you. From Cape Breton with ?, Cereal Killer Oatmeal Stout is now available in the NSLC!

Find scallops somewhere: The scallops you’ll find in Cape Breton—Digby giant scallops, named after the seaside town of Digby—may be the best in the world (they are also increasingly harvested sustainably).

Doktor Luke’s, Sydney
Cozy favorite Doktor Luke’s is a great spot for a caffeine boost. The ice frappes “are to die for” in the words of Yvette Rogers. There are teas, hot chocolate, hot cider, and baked goods, too.

Colette’s Family Restaurant, Glace Bay
The worn seats at Colette’s are as cherished as any on the island. Drop in for a sandwich buried beneath fries, or—for a taste of the island—a Scottish toast (French toast dipped in oats and brown sugar). For lunch or a big breakfast, you can’t beat the value at Colette’s.

Glace Bay Chip Wagon, Glace Bay
Hand-cut fries, maybe the best on the island, are served steaming hot out of a white-and-royal-blue truck at 1 Water Street in Glace Bay. From line, the narrows of Glace Bay Harbour and the sweeping open ocean lap within view. The tidal shallows of Big Glace Bay Migratory Bird Sanctuary, where Canada geese and piping plovers congregate, are not far. See the wagon’s Facebook page for hours and updates.


Point Michaud Beach, Fourchu
Hanging off the island to the southeast, past Saint Espritt, is big, broad Point Michaud Beach. Bring sandwiches, fresh blueberries and a bottle of something from Eileanan Brèagha Vineyards (in Denys) and settle into the sunkissed sand. Let the hours slip off undetected into the infinity in two dimensions. 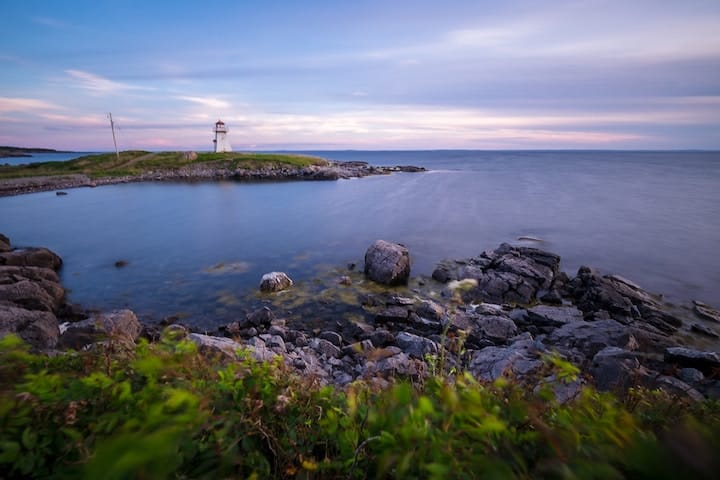 Cap Auget Lighthouse, Arichat
One more lighthouse before the road leads off the island, via a turn through the lightly populated (~4,000 people) Isle Madame…

Until next time, Cape Breton.