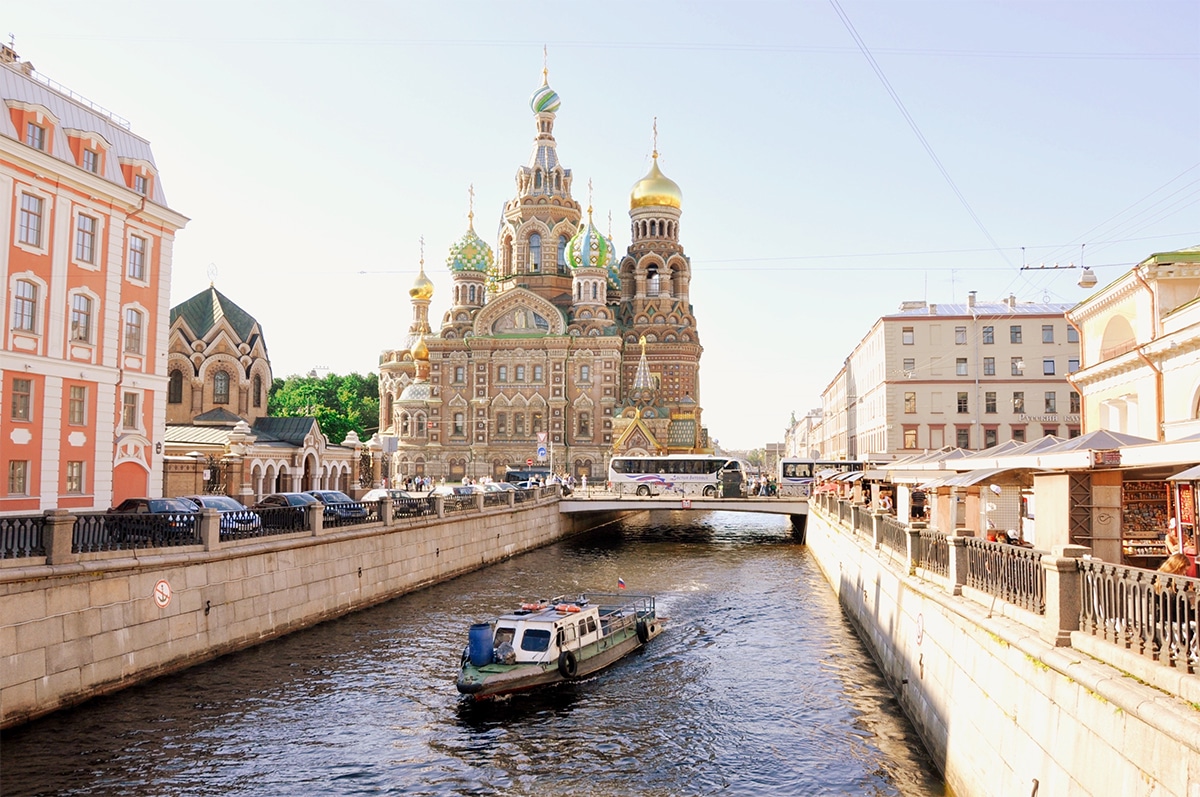 What’s going on in Ukraine is heartbreaking and unimaginable. The images and videos we’re seeing of what’s happening there are really hard to comprehend and it’s devastating to think of what the people of Ukraine are suffering. One thing is for sure: Russia and Putin are going to pay in more ways than one in the long run and if you’re traveling this year, whether it’s halfway across the globe or to the other side of your town you will be paying too. Now, obviously, this is trivial compared to what’s going on with the Ukrainian people as they’re fighting for their lives, their land and their livelihoods. Here are five meaningful ways you can help the people of Ukraine right now.

A war like this has far-reaching effects and people around the globe are going to feel them in different ways. Here are 5 ways travel is going to change because of the war in Ukraine.

1. Higher gas prices
Higher gas prices is an obvious one since “Russia is the world’s third-largest producer of petroleum and other crude oil” according to the Los Angeles Times and data from the 2020 U.S. Energy Information Administration. Not only will you pay more to fill up your car (I paid almost $5 a gallon yesterday here in California) but expect every mode of transport, be it a taxi, rideshare, limousine, cruise or plane ticket, to increase prices to offset their costs.

2. Canceled or longer flights
If you’re flying from North America or Europe to Asia then you can expect more than higher fares. You can bet on either airlines canceling their flights or making them much longer as they will need to go around Russian and Ukrainian airspace. Most airlines fly over Russia airspace to save time and money and Russia has banned UK airlines from using theirs in retaliation for the UK banning all flights from Aeroflot, Russia’s state-owned airline, from landing in the UK or using UK airspace.

If you’ve never realized how valuable Russian air space is, then check out this 2018 video from Wendover Productions. It’s a bit outdated as they use Iceland’s now defunct WOW Airlines as an example but as you can see, Russian airspace is the most valuable in the world and airlines pay over $100 per passenger when they fly over it.

On top of that, airlines will not be going near Ukraine airspace during the conflict, which will make those flights longer as well. See screenshot below from FlightRadar24. 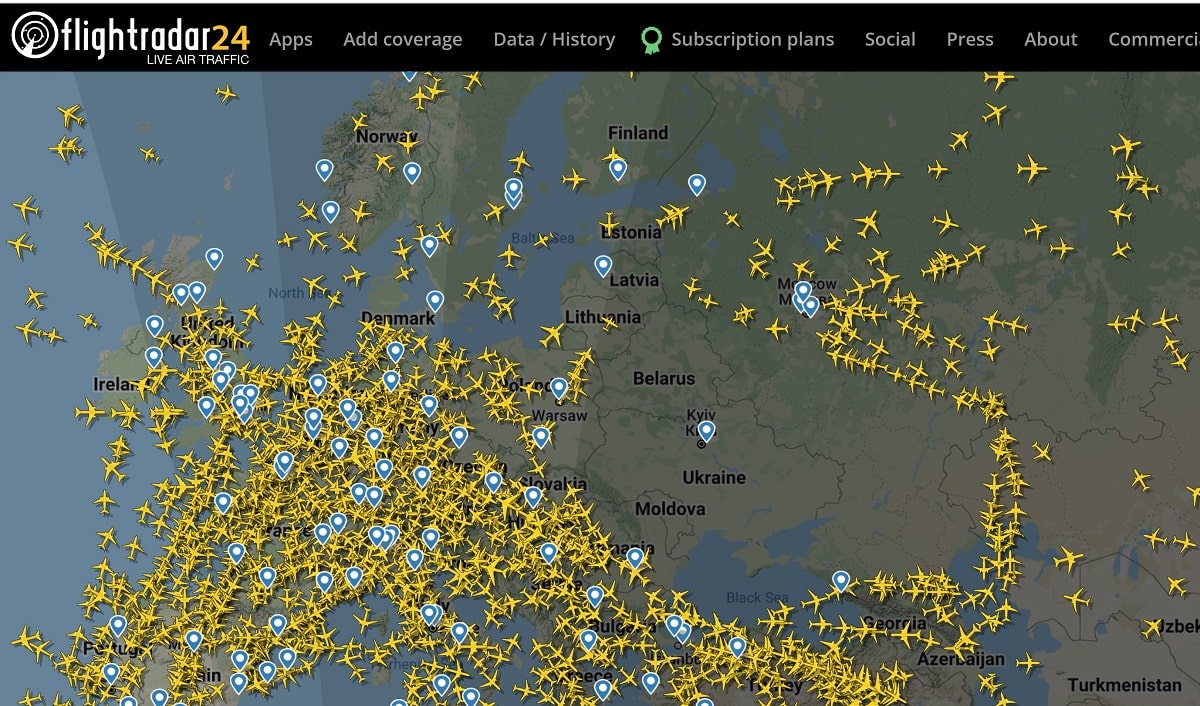 Updated Feb 27: According to the Wall Street Journal: The EU banned not only commercial airliners but any plane owned, registered or controlled by Russians, the European Commission president said.
“Our airspace will be closed to every Russian plane–and that includes the private jets of oligarchs.”

3. Cruise itineraries will change
According to Cruise Critic, “The war in Ukraine has prompted a number of cruise lines to cancel itineraries that include stops in Russia. Norwegian Cruise Line Holdings, which includes NCL, Oceania and Regent; Viking; Atlas Ocean Voyages; and U.K. line Saga Cruises have canceled stops in Russian ports, including St Petersburg.” The cancelations vary but some have already pulled the plug on the whole summer. I won’t be surprised if they pull Russia ports in retaliation to Putin, even if the war ends tomorrow. I’m pretty sure most patriotic Americans don’t want to support Russia so they won’t step on their soil. That’s a shame because I’ve visited St. Petersburg once on a Seabourn cruise and it was beautiful.

4. Trips and tours canceled
To prove my point above, Americans in financial power will punish Putin for his mad antics, including Rick Steves who runs popular European guided tours. Rick just tweeted: “Our mission at @RickStevesEur is to help Americans understand the world through travel. But when we bring travelers to Russia, we also bring their dollars — dollars that would support Putin’s aggression. We have now canceled all 2022 tours to Russia.”

Our mission at @RickStevesEur is to help Americans understand the world through travel. But when we bring travelers to Russia, we also bring their dollars — dollars that would support Putin’s aggression.

We have now canceled all 2022 tours to Russia: https://t.co/pl9IiebWMX

That was a smart move by Rick but even if he didn’t cancel his Russian tours, I bet those Americans who don’t have family there and were planning to travel there this summer, just canceled. Sadly, the same goes for Ukraine as well as neighboring countries. In fact, I’m betting that many of those who had European plans, including to Western destinations that aren’t even close to Ukraine, are already choosing other destinations. Unfortunately, many Americans don’t know their geography well so when people hear there’s a war in Europe, they think it’s the whole continent. Just look at what happened when Ebola broke out in Western Africa. The whole continent was affected.

5. Sporting events
Traveling for huge sporting events is big business and Russia just lost a ton. And I imagine it will be years to come before they get any more. According to ESPN: “The International Olympic Committee urged sports bodies Friday to cancel or move all events they plan to hold in Russia and Belarus, and stop using the countries’ flags and national anthems.” The Washington Post reports: The Union of European Football Associations biggest match will be moved from Russia. “European soccer’s governing body said it would relocate the May 28 final, the biggest club soccer match in the world, from Gazprom Arena in St. Petersburg to Paris.” That’s not all, FIFA says they will pull World Cup qualifiers in Russia and the same goes for Formula One.

None of this compares to the struggles the Ukrainian people are currently facing but is worth noting for anyone who has upcoming travel plans.