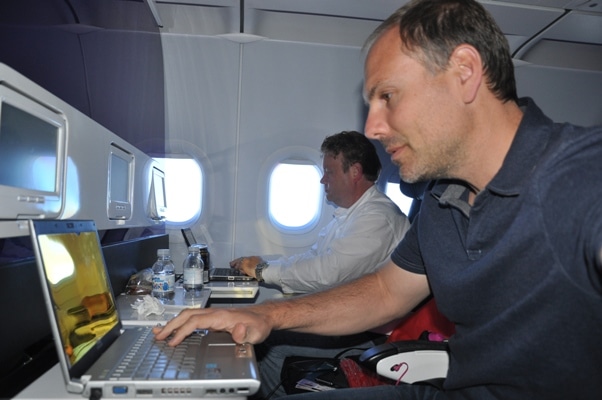 If you follow me on Facebook, Instagram, Twitter, and/or Periscope, you know that I travel a lot (85% on the road to 20 countries a year). I’m constantly on my laptop or phone trying to find the best deals and/or the quickest and most economical way from Point A to Point B. I reference a countless number of websites and apps and below are what I believe are the six airfare deals websites every traveler needs to bookmark:

1. Google Flights
I’m a big fan of Google Flights, which is powered by ITA Software; they make it easy to search over a certain period for the cheapest price. My favorite function is the one that lets you expand the map on the right side to see practically every city in the world, and what the cheapest fare is that will take you there from your home airport. Zoom out to see the whole world, and then zoom in to a particular region to see the price. They have an “I’m Feeling Lucky” button too, which picks and searches a random city for you. I use Google Flights to search by a particular airline or alliance, which is important for those who collect miles (raising hand). The site takes some getting used to, and it doesn’t make it very easy to go back to the homepage, but it’s definitely one you want to add to your list when you’re searching for flights. Note: You can’t book from Google Flights but it makes it easy to book directly from the airline you choose.

2. Southwest.com
One airline that Google Flights and other search tools and online travel agencies like Expedia do not have access to is Southwest Airlines. The only way to find Southwest fares is by searching on Southwest.com. As you probably know, Southwest was the original low-cost carrier so it’s ironic that they’re now the only one that doesn’t charge for checked bags. This is important for those who check bags when they travel since Southwest offers the first and second checked bag for free. Most airlines would charge an extra $120 on a roundtrip ticket.

3. Airfarewatchdog.com
If you don’t want to constantly have to check airfares manually (as I like to do for some insane reason), sign up for fare alerts. Many sites offer this service for free, including Airfarewatchdog.com, Kayak, Yapta.com, and FareCompare.com. Here’s a chart that compares the leading airfare alert sites.

4. FlyerTalk message boards
Want to find the absolute cheapest fares? I’m talking Boston to San Diego for $20! Then monitor FlyerTalk’s message boards, especially the forum “Mileage Run,“ where you’ll find frequent flyer junkies sharing airline “mistake” fares (where the airline’s pricing analyst accidentally types in the wrong price). You’ll need to visit often as the fares typically only last a couple of hours at best. But you could score yourself one heck of a deal!

5. TheFlightDeal
TheFlightDeal.com is one of the sites that’s constantly searching for low fares. They have a daily newsletter but by the time you get it, some of the fares are gone so you need to check their website often. They target mileage junkies who are looking for the best fares so they can maximize their miles, but any traveler will find their information valuable.

6. Skiplagged
Skiplagged was created by a 22-year-old whiz kid from New York and you probably heard about the site when United Airlines and Orbitz decided to sue him. They ending up losing, which was a huge win for the little guys and for consumers in general. Why were the airlines so upset with Skiplagged? It’s because the site shows users how to find lower fares using a strategy that’s been around for years called “hidden city” ticketing..

I buy dozens of tickets a year and only once did I come close to using the “hidden city” strategy, and it was when I needed to get to Cleveland from L.A. and all of the one-way tickets were pricing out at a whopping $600! But then I found a $230 ticket to Buffalo (200 miles away) that first stopped in Cleveland ON THAT EXACT SAME $600 flight.

I know it doesn’t seem to makes sense since Buffalo is further from Cleveland, and since you have to take two flights instead of one, but the airlines do this to compete with other airlines. One of their competitors must have  had a sale on Los Angeles to Buffalo so in order to compete, they offered the same price. Meanwhile, at the time, United had a monopoly on the LA-Cleveland route, so they had no incentive to offer a low fare on that route..

In theory, I could have bought a one-way ticket from LA to Buffalo and just gotten off in Cleveland and let my connecting ticket to BUF go to waste but that would have been against airline policy and I didn’t want to risk losing all of my miles. So I didn’t do it. Had I done it, I would have just purchased a one-way ticket and made sure not to check bags or put in my mileage account number. I would also made sure to be one of the first on the plane, because if there’d been no overhead space available, I’d have been forced to gate check my bag to my final destination—and that would have been a problem.

If the airlines catch you doing this, you have a good chance of losing all of your miles and possibly paying a fare difference. It’s not worth the risk.

What are your favorite sites for searching for airfares? Leave a comment below with your suggestions!