A Welcome Mat to the World 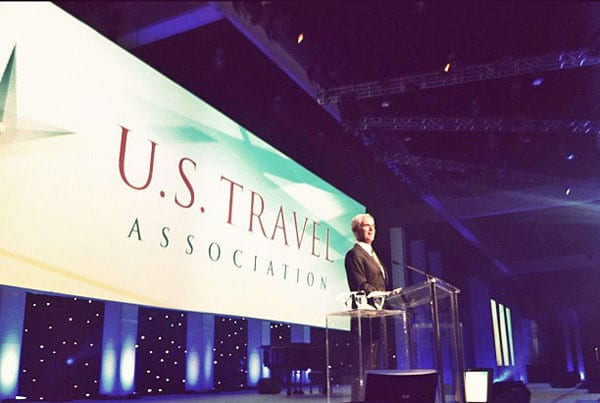 This week, the Obama administration took part in the U.S. Travel Association’s International Pow Wow conference, the travel industry’s premier marketplace bringing together more than 1,000 U.S. travel organizations to connect and expand international travel and tourism. Coming together here in Los Angeles will benefit citizens of all countries economically, through increased trade and job creation, and by drawing the world closer together as we share our cultures, our history and the beauty of our lands.

Under an executive order signed earlier this year, President Obama is working to make it easier for people from around the country and the world to visit the thousands of premier tourist destinations across the United States, from the Grand Canyon to the lights of Las Vegas, from the Statue of Liberty to the great cultural destinations right here in Los Angeles.

At the President’s direction, we are implementing a government-wide National Travel and Tourism Strategy to promote U.S. tourist destinations and support the tourism industry. The President has also directed his Administration to increase our capacity to accept and process international visitors.

For example, the Department of State is meeting the growing demand for tourist visas in places like Brazil and China by increasing staff and expanding hours. And the Department of Homeland Security is expanding programs like Global Entry, which expedites clearance for preapproved, low-risk travelers through dedicated lanes and kiosks.

A particular focus of our efforts is promoting America’s iconic destinations to international visitors – bringing more people to our national parks, cultural monuments and other public lands and waters.

We know that tourism is vital to the U.S. economy. Just last month, the Department of Commerce released data revealing that international and domestic tourism spending increased 8.1 percent in 2011, supporting an additional 103,000 jobs for a total of 7.6 million. In addition, nearly 62 million international visitors contributed more than $153 billion into our national economy in 2011 – making tourism America’s number one service export.

And in further evidence that the United States remains one of the top destinations for international visitors from around the world, we found out last week that international visitors spent an estimated $13.3 billion on travel to, and tourism-related activities within, the United States during the month of February alone—a 14 percent increase over the spending in February 2011.

And our future opportunities are very promising. This week, Commerce released its 2012 Spring Travel Forecast, which projects that 65.4 million foreign travelers will visit the U.S. in 2012 alone. It also anticipates 4-5 percent annual growth in tourism to the U.S. over the next five years. Further, according to a McKinsey Global Institute report issued in June 2011, the leisure and hospitality sector, of which travel and tourism is a key component, is the fifth-largest employer in the United States. McKinsey estimates that the leisure and hospitality sector could add 2.1 to 3.3 million jobs in this decade – the third highest job growth potential by sector.

As we look to the future, we want to work with all of you to let international travelers know that we are putting the final touches on the new National Tourism Strategy right now.

We are working with leaders in the tourism industry, including those of you here in Los Angeles, to make the United States the number one tourist destination in the world.

In short, our message is clear: We are putting out a welcome mat to the world.

0 Comments On "A Welcome Mat to the World "