Air Canada Has Sunk To A New Low. Can You Believe They Are Pulling This Trick? Let me start off by saying, I have a soft spot for Canada and Canadians. First of all, I married a Canadian; she’s the most amazing person in the world and she also loves her country deeply. Secondly, even before I married Natalie, I had visited Canada numerous times and loved it – from the natural beauty to the cool and polite people.

But I started to get a bad taste in my mouth when Air Canada (AC), the country’s national airline, refused to refund customers’ money (including me), even after they canceled flights due to COVID.

I wrote a scathing post in May of 2020 entitled Why I’m Filing a DOT Complaint Against Air Canada since they refused to refund my money even though they were liable by law. I followed up two days later with an update, How I’m Getting My Money Back From Air Canada.

I ended up not filing a complaint with the US Department of Transportation because just before I filled out the form, I learned that my credit card had agreed to a chargeback. I called Chase and told them that Air Canada wouldn’t refund me and they issued a temporary credit to investigate it, and they later granted it.

I heard from multiple readers that they weren’t as lucky so I think it depended on their credit card company, when they bought the tickets and how long after the purchase they had asked for a chargeback.

Even though I didn’t file a complaint with the DOT, there were plenty who did, so many so that the DOT is now proposing a $25 million fine against Air Canada.

You would think the executives would have learned their lesson but foolish me, I decided to give them a second chance and it looks like I got burned. Listen to this new low by Air Canada.

Last night, my homesick wife, who is desperate to see her family (it’s been over a year and a half since she last hugged her mother, sister and niece, and over two years since she stepped foot in her beloved homeland because she was pregnant with our daughter and then COVID-19 hit), I decided to price out tickets for July 21 and Christmas.

I was looking at tickets for July 21 because we’re hoping that the Canadian border will open on that day, and Christmas, for obvious reasons. Prior to the pandemic, we almost always spent Christmas in Toronto and New Year’s in Hawaii. Not too shabby, eh?

Prices for July 21st were not in our budget but for Christmas, they were amazing, just $179 per person. The only reason I snagged them was because Air Canada has a 787-9 flying between LAX and YYZ and the flight was wide open, which meant the best seats were still available. They also had a sale on seat selections. I’m not too keen on paying for seat assignments but I no longer hold status on Air Canada or their partners.

I snagged four seats in the bulkhead (row 18) and paid the $59 a piece fee since it’s more space and really makes the flight that much more enjoyable, especially with two little kids.

I only booked them because I knew I had 24 hours (a DOT rule) to talk it over with my wife, who was already fast asleep. 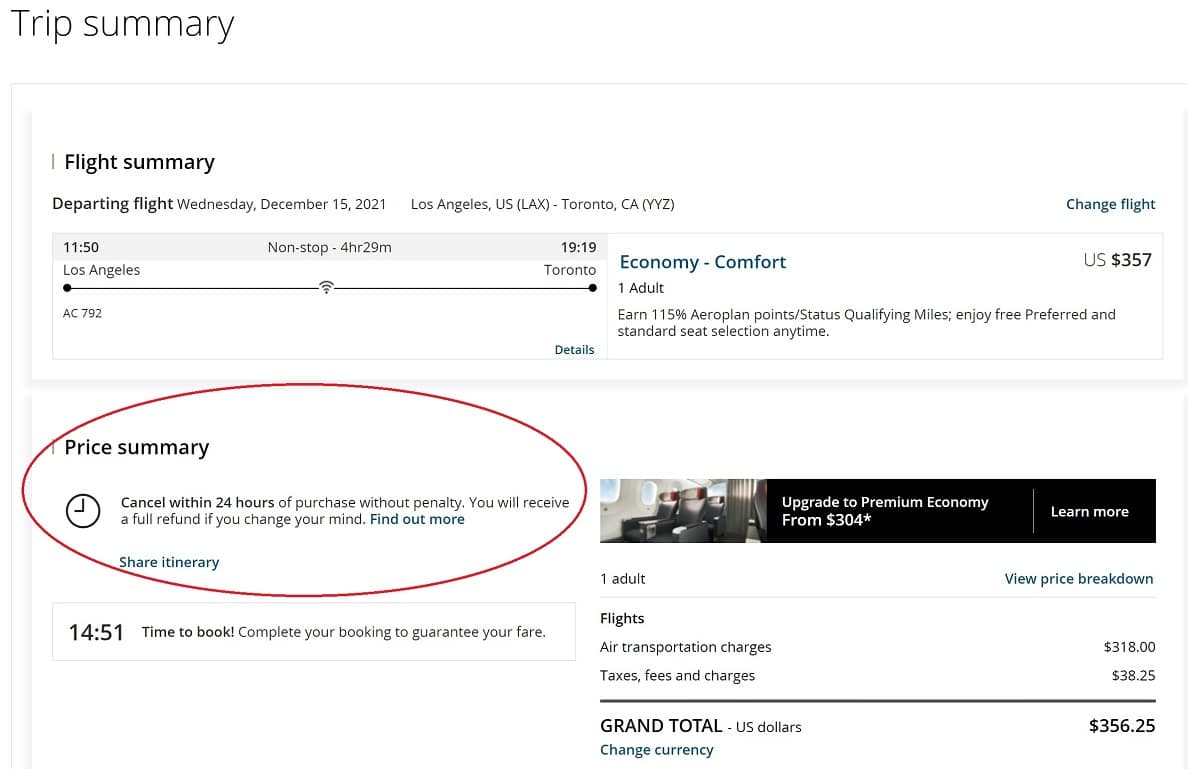 Before I hit purchase, Air Canada flaunted the DOT rule as a marketing ploy, with “Cancel within 24 hours of purchase without penalty. You will receive a full refund if you change your mind. Find out more.” See screenshot above which I took the following day after I learned I wouldn’t be getting refunded for my seats. I priced the above itinerary out for just one person, not four.

Well, guess what? After talking the flight details over with my wife and her mother in the morning, they felt it was a long shot that we would be traveling for Christmas because of the COVID variants and the fact that our young kids won’t be vaccinated. It will probably be just too risky anyway, which is also why I just canceled our flight to New York for tomorrow.

As you can see from the screenshot above, when I logged into my reservation to click cancel, this is where Air Canada sank to a new low. Air Canada said they will only refund $694 of my $931 purchase. “$694.00 will be credited to the original form of payment.”

Say what? Is Air Canada joking? They’re not only not going to give me a full refund but they’re not even offering the seat selection fee as a credit for future use. Insane, right?

Here’s what it said when I clicked cancel: “Your booking has been cancelled. We’re sorry to see you go. Your flight to Toronto (YYZ) has been cancelled, and you will receive a refund for $694.00, credited to the original form of payment. Please allow a minimum of three weeks (unless otherwise stated by applicable law) for your refund to be processed. You will receive an email confirmation once your refund has been processed.”

This is unacceptable and people need to be warned, as well as the DOT. I called Air Canada to make sure it’s not a computer glitch but the wait time is one hour and 37 minutes.

Not only will I file a complaint this time, but I also just called American Express for a chargeback. The representative I spoke to said she would open up a dispute but it can take six to eight weeks to be resolved.

My wife had made Nanaimo bars for Canada Day a few days ago and she offered me one while I was writing this post but I just couldn’t stomach it – Air Canada has left a seriously bad taste in my mouth. While we will definitely be going to Canada frequently once the pandemic is over and the border reopens, I will be looking for alternate ways to get there. I would rather have to make a connection on another carrier than fly nonstop on Air Canada. At this point, Air Canada will be my last resort.

UPDATE
Well, I don’t know if it was a computer glitch, a chargeback, or whether the folks at Air Canada read my story and did something about it, but I received a refund from AMEX for my seat assignments. Has this ever happened to you?

39 Comments On "Air Canada Has Sunk To A New Low. Can You Believe They Are Pulling This Trick?"