Sydney Watson, an Australian-American conservative political commentator who has recently changed her Twitter bio to “Very important doctor. Claiming to be American-Australian” made international headlines this week when she posted a photo of her wedged in the middle seat of an American Airlines plane between two “obese people.” TIP: Here’s how to NOT get stuck in the middle seat. 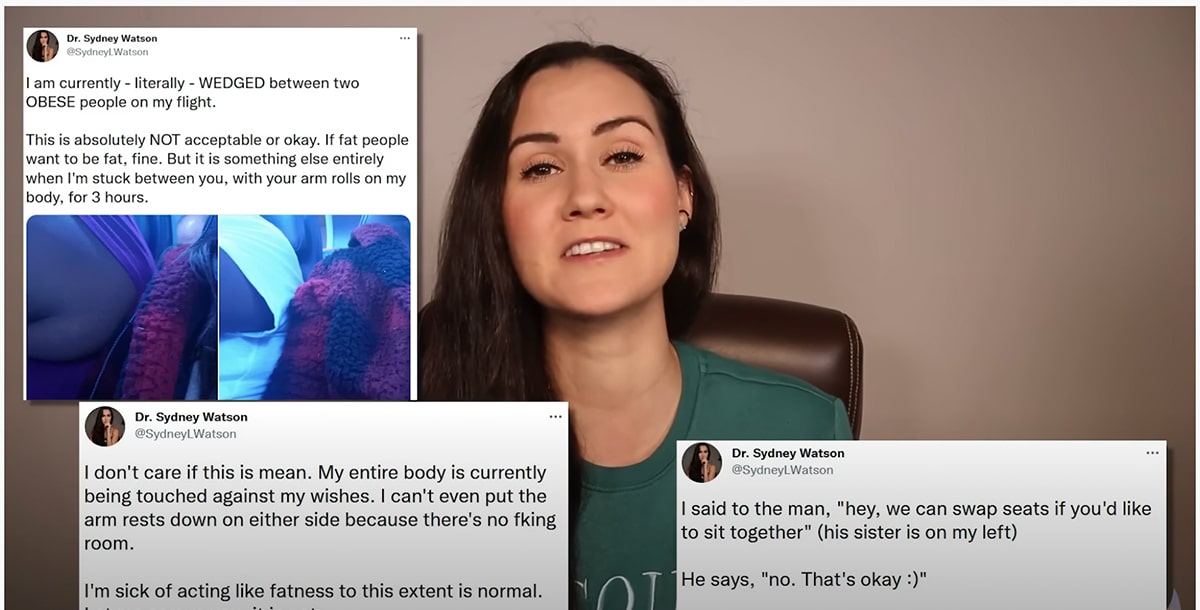 Sydney wrote: “I am currently – literally – WEDGED between two OBESE people on my flight. This is absolutely NOT acceptable or okay. If fat people want to be fat, fine. But it is something else entirely when I’m stuck between you, with your arm rolls on my body, for 3 hours.”

I am currently – literally – WEDGED between two OBESE people on my flight.

This is absolutely NOT acceptable or okay. If fat people want to be fat, fine. But it is something else entirely when I’m stuck between you, with your arm rolls on my body, for 3 hours. pic.twitter.com/9uIqcpJO8I

Sydney didn’t hold back and followed up with a series of mean tweets: “I don’t care if this is mean. My entire body is currently being touched against my wishes. I can’t even put the arm rests down on either side because there’s no fking room. I’m sick of acting like fatness to this extent is normal. Let me assure you, it is not.” She went on to say: “If you need a seat belt extender, you are TOO FAT TO BE ON A PLANE. Buy two seats or don’t fly.”

Better yet, watch Sydney explain in her own words what happened in the video below:

American Airlines’ social media team responded with a politically correct response: “Our passengers come in all different sizes and shapes. We’re sorry you were uncomfortable on your flight.”

Our passengers come in all different sizes and shapes. We’re sorry you were uncomfortable on your flight.

Of course, as expected, this divided the internet; some people took the side of the obese passengers, others sided with Sydney and some just blamed the airlines themselves like Jorj McKie who tweeted: “I think the real problem isn’t the fat people, but the airlines making the seats ever-smaller to squeeze a bit more profit out of the flights. If American’s position is that passengers come in all sizes, then their seats should be designed to accommodate those sizes.”

HILARIOUS VIDEO: How to Keep the Seat Next to You Empty on Southwest Airlines or On a Bus or Train

I feel the pain of all three travelers and although I cringe to side with someone so mean-spirited as Sydney, I think she was in the right … especially after reading American Airlines’ official policy for people of size, which states: “If a customer needs extra space outside a single seat to travel safely, another seat is required. We encourage customers to address all seating needs when booking. When you call to book, Reservations will make sure you get 2 adjacent seats at the same rate. If you didn’t book an extra seat in advance, ask an airport agent to find out if 2 adjacent seats are available. You may be offered a seat in a higher class of service that may provide more space; in this case, you’ll be responsible for the fare difference. If accommodations can’t be made on your original flight, you can buy seats on a different flight at the same price as your original seats.”

There’s no denying airline seats are getting smaller and Americans (and Australians) are getting bigger. I’m just shy of 6 feet, weigh 200 lbs and I barely fit in coach seats. But American Airlines’ policy doesn’t really specify what constitutes a person of size or who determines if the passenger “needs extra space outside a single seat to travel safely.” Is that the job of the passenger when they’re booking? The flight attendants working the flight? A passenger like Watson, who can’t move?


There have been many times when I’ve ended up sitting next to someone who is much larger than me and it’s no fun so I can’t imagine being wedged between two people of size. Once, I couldn’t lower my tray table because my seatmate’s stomach was in the way. I felt bad for the person but thinking back on the situation, they really should have purchased two seats or tried to get upgraded. Here are my tips for everyone on how to get upgraded to first class.

Sydney tweeted: “I said to the man, “hey, we can swap seats if you’d like to sit together” (his sister is on my left) He says, “no. That’s okay :)” …and then I started shrieking internally.”

RELATED: Are You Obligated to Switch Seats on a Plane?

Their tactic of taking the aisle and the window and leaving the middle seat open is smart if the plane isn’t full since those are the last seats to get picked.

TIP: When traveling in a party of two, a savvy traveler trick is to book a window and an aisle when it’s a row of three across, and hope that no one takes that middle seat. But if someone does come for the middle seat, then of course one of you has to move into the middle seat in order to sit together.

However, these days, thanks to the pent-up demand in travel and airlines not flying as many flights as they did pre-pandemic, flights are almost always 100% full.

The brother and sister travelers might have had better luck on Southwest Airlines where there’s open seating so the only way they would have had someone sit between them is if the plane was completely full. RELATED: Taylor Swift’s Clever Southwest Airlines Tip For Keeping the Seat Next to You Empty

In a generous move by American Airlines’ executive team, they sent Watson an apology letter (below) stating that they were sorry the flight attendants couldn’t move her to a different seat and gave her a $150 travel credit. Sydney replied: “I’d rather take the $150 American Airlines offered me as a refund and give it to someone who needs a PT or a gym membership.”

Well, here’s the email I got from American Airlines. pic.twitter.com/bfa2jwoZYE

Ways to Avoid This Situation in the Future

How about you? What would you do if you were in Sydney’s situation?