On Saturday, my wife, son and I flew from New York (JFK) to Los Angeles on American Airlines Flight 300. Our flight was scheduled to depart at 8pm. We pushed back from the gate at 8:19pm and took off at 8:29pm. We landed at LAX at 11:18pm and arrived at the gate at 11:25pm. While at baggage claim, I was surprised to hear an announcement that AA flight 185 from JFK had also landed and passengers could pick up their bags at baggage carousel three. 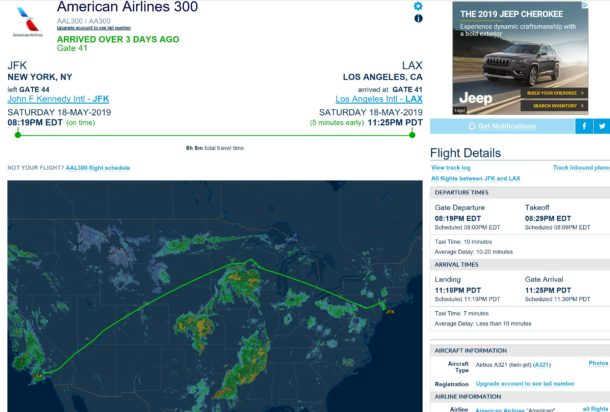 I know American Airlines has a flight almost every hour but was surprised to hear that one had landed around the same time we did. So I looked up the flight number on Flight Aware (I love their website) and saw that the flight was scheduled to depart 30 minutes after ours but arrived just seven minutes after. How’s that? Well, it looks like our flight went around a storm (screenshot is above) while theirs went right through it (screenshot is below). 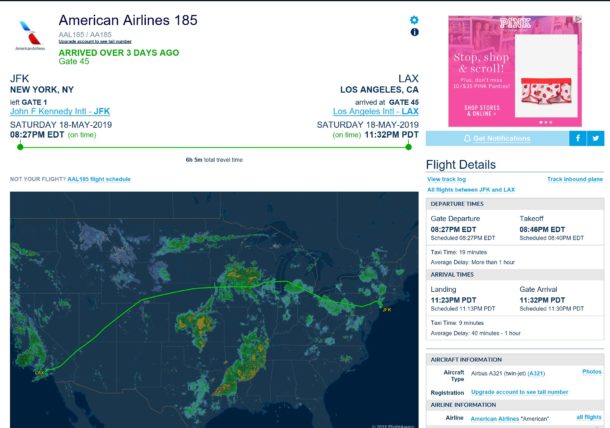 Just before we took off, a flight attendant warned passengers that there could be some nasty turbulence after Chicago and made it sound like it would be that way across the country. He said they would hurry up and complete the meal service so the crew would be able to take their jump seats if needed. That’s always nerve-racking because it means there’s going to be severe turbulence.

Fortunately, the turbulence wasn’t that bad and the flight attendants never had to take their jump seats. But after looking at the maps on Flight Aware and seeing we went around the storm while flight 185 went through it, I wondered if those passengers had experienced the severe turbulence. If so, I’m glad we took the longer route because I’d rather have a longer flight with smooth air than a shorter flight with rough air. 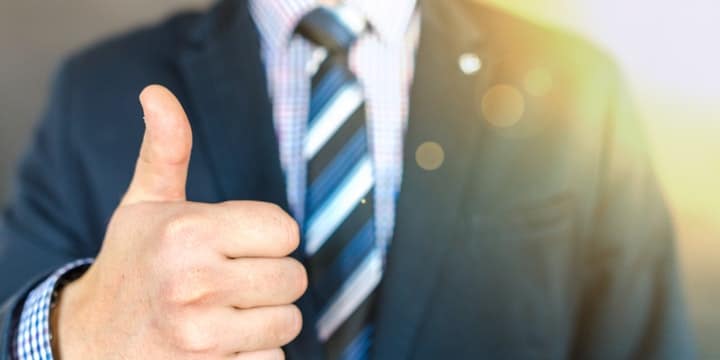 Noob Q&A: “Can I Apply for the Chase Sapphire Preferred Again?” and “What’s a Mattress Run?”