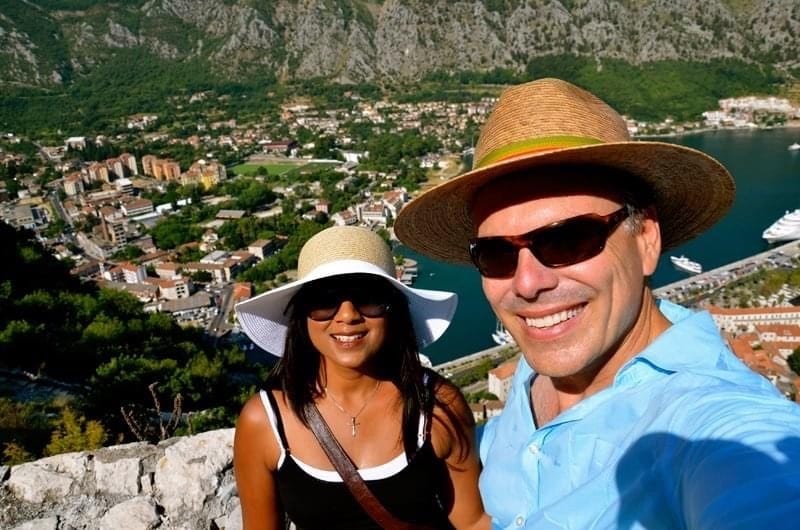 It’s that time of year when countless couples tie the knot. I’m at the age where I don’t have multiple weddings to attend every summer like I did a decade or two ago. Don’t get me wrong, I love going to weddings, but it gets expensive with travel and gifts. BTW: Don’t you think that guests who have to travel for a wedding shouldn’t be obligated to also spend money on a wedding gift? For our wedding in Toronto (where Natalie is from), I told some of my friends and family that were flying in, not to bring gifts.

Speaking of our wedding, it was a made-for-TV drama and if only we’d had a camera crew, we could have won an Emmy for best documentary. There were so many things that happened that you just can’t make up, including my dad being whisked away in an ambulance a few minutes before our nuptials. Here’s the crazy story.

Now to my travel tip … the inspiration for this post was a BBC interview with Bill Murray. Bill says: “If you have someone that you think is The One … take that person and travel around the world. Buy a plane ticket for the two of you to travel all around the world, and go to places that are hard to go to and hard to get out of. And if when you come back to JFK, when you land in JFK, and you’re still in love with that person, get married at the airport.”

Bill is absolutely right. For years, my best advice for couples has always been to go on their honeymoon before they get married – that’s if they haven’t already traveled together. I know, in this day and age, it seems unlikely that couples wouldn’t have traveled together first but believe it or not, it’s quite common and I have a close friend who got engaged after a couple of dates and married within three weeks after meeting. Yes, believe it or not, they’re still married.

I’ve always believed in this advice. I met my wife, Natalie, on a press trip in Florida and we dated for five years before getting married. I knew within the first few dates she would be the most amazing wife and mother but I just wasn’t ready to get married. I was too busy creating a business and traveling the world. And travel we did. We commuted between Los Angeles and Toronto for the first eight years (yes, we even commuted while being married) but we had so much fun and ended up going to 65+ countries together. While traveling together, we got to know each other in unique situations. Travel can be fun and relaxing but it can also be extremely tiring and stressful. By traveling together, you really get to know someone, how they handle certain situations and it’s a great compatibility test.

Natalie moved to L.A. a year before our son Jack was born in 2016 and eight months after his birth, we all hit the road running. Jack flew almost 70 times in a 2.5 year span and has been to multiple countries. We had the same plan for our daughter Olivia, but the pandemic put a stop to our plans. Olivia’s just now starting to see the world as she’s only been on a handful of flights.

One thing is for sure, my wife and I hope that when our kids grow up and meet their significant others, they will heed Bill Murray’s and my advice.