Confessions Of A Street Singer

If you are traveling in Europe this summer, you’ve probably passed by a few musicians in the Metro or at weekend markets. You might have ignored what may have looked like a beggar with some talent, but if you are like many, you stopped to enjoy the music. You might even have tossed a one- or two-euro coin into the hat that lies at the musician’s feet. I may be on vacation, but my vacation has been spent watching this scene repeated hundreds of times a day. 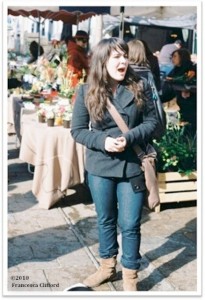 So who are these singers, songwriters, saxophonists, and accordionists you find on your holiday travels who bring either pain or, well, music to your ears? A good number of them are, in fact, impoverished but extremely talented. The rest of us are actually professionals who are just looking to pick up some extra cash, with the everlasting hope that the right person will stop and suddenly the streets will turn into Madison Square Gardenand the Nokia Center. One thing’s for sure: you won’t find them as young as me unless you’re on the Third Street Promenade in Santa Monica, CA. In all the markets and streets in France where I’ve sung, in all the little piano bars where I’ve played, I’ve never met a performer under 30. I’m not even 18 yet.

This whole “career” began one Friday afternoon at school during my year abroad in France, where I was just starting to seriously focus on music. My friend and I decided to perform at the market the following morning just to have an excuse to avoid an awkward breakfast with our host families. With him backing me up on guitar, I slowly got over my terrible stage fright and began to feel right at home on the Place St. Michel in Rennes. I could be found every Saturday morning, rain or shine, on my favorite corner of the Marché des Lices[1] between two flower vendors and with a little beret at my feet. I sang Edith Piaf classics and jazz standards a cappella, and I soon became known as La Petite Môme de Rennes.[2] Next thing I knew, I was singing Wednesday nights in little piano/jazz bars all over town.

By the time I was back in the States, performing had become second nature. Singing on the streets finally kicked my stage fright to the curb, and I moved on to real venues. I landed my first gig in the famous Viper Room Acoustic Lounge, where the Rolling Stones performed before they “made it.”

Although I’ve performed seasonal shows at the House of Blues and at benefit concerts, I prefer to be back in France for the summer, belting away. I love being right here, among strangers, watching them be touched by my voice, and seeing their looks of sheer joy as they dance to my rendition of Piaf’s La Vie en Rose. Surprisingly, there is nothing more intimate than singing on the streets to complete strangers. There are no spotlights, no tickets, and, most importantly, no bullshit. I feed off the reactions of passersby, and I live for their compliments and pocket change. That said, the audience is tough, and I have to do everything I can to please them on their vacation, or I don’t really get to enjoy mine.

Tutoring or babysitting may be challenging, but singing on the streets has been the most difficult job I’ve ever had–and most of the time it’s also the most rewarding. The success has never depended on my voice, because I never perform unless I am 100 percent; as my audience, you always determine my success.

My story is just one of thousands. There are many professional street singers around the world. In France, police tend to turn a blind eye to the talented individuals who decide to brave it on the streets because they see the growth of this new “art form.” Only to sing in the Paris Metro does one need to obtain a permit, and that can only be obtained through a casting process with the Parisian Transportation Bureau. At face value, singing on the streets may seem like a free-for-all, but it’s one hell of a job entertaining the hundreds of people that pass by me in a two-hour set.

So next time you find yourself sitting in the Metro or walking through the aisles of a market, and you hear a voice or a sound that puts a smile on your face or brings back a memory, drop a euro or two in the musician’s hat. You’ll have helped fuel a growing community of talented singers and musicians who only keep going because of you and your good will.

Now if you’ll excuse me, my train has just arrived in Paris. You’ll be able to find me on the Champs-Élysées near the entrance to the Arc de Triomphe, with a hat at my feet and a song in my heart.