LOL: Courteney Cox Jokes About How Real New Yorkers Eat Pizza in Viral Video and First-Timers Are Going to Be Really Confused

Friends TV star Courteney Cox just posted a video eating a slice of pizza in NYC. In the funny parody, she hilariously shows “how “real” New Yorkers eat pizza 🍕” as she says in her caption. Either that or she’s giving some really  bad advice and first-timers to the Big Apple are going to be extremely confused! RELATED: The Best Pizza in New York City – Do You Agree? 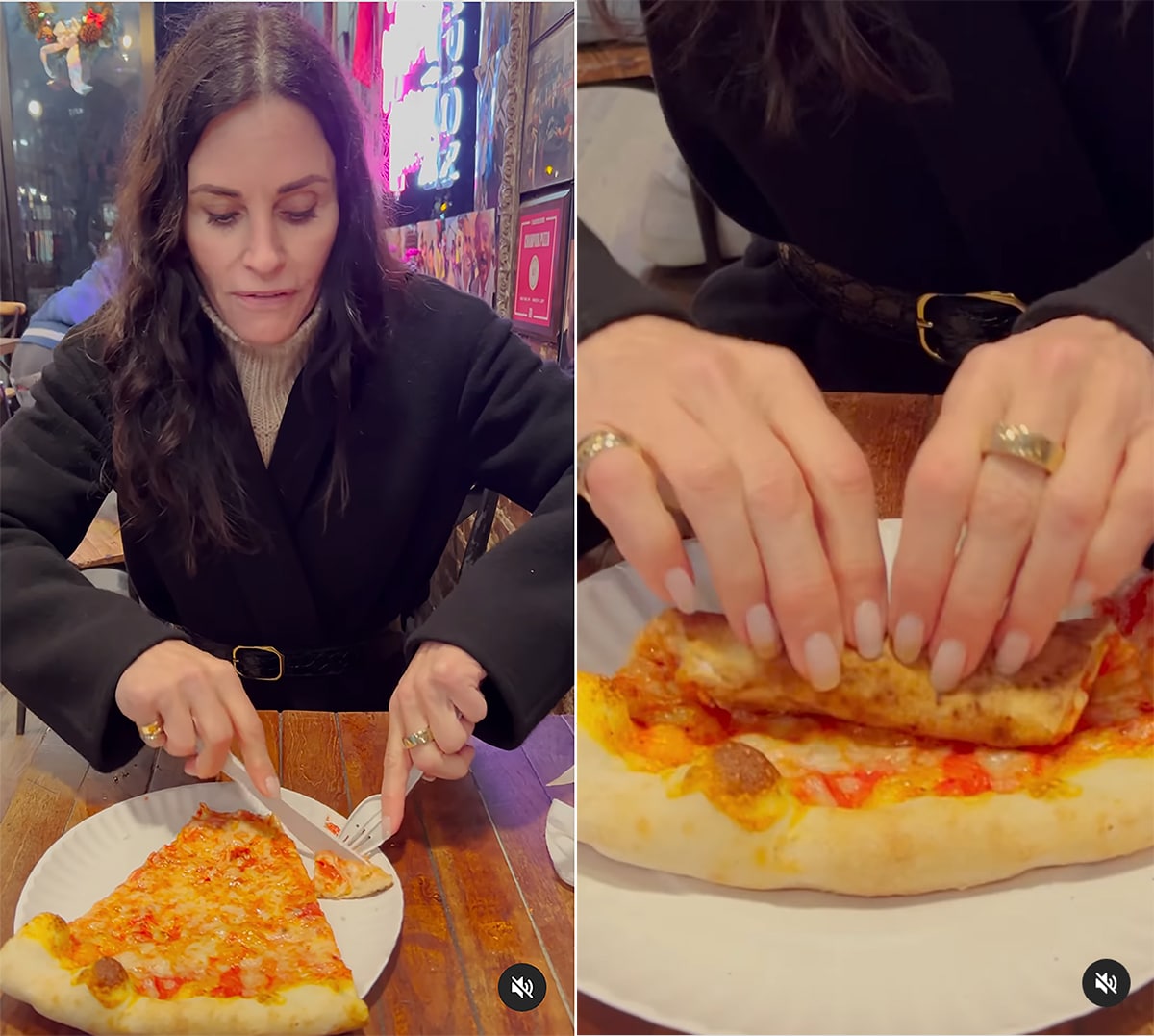 I know what you’re thinking … you live in Los Angeles so how can you dish out advice about the right way to eat New York City pizza? It’s true, we don’t have very good pizza out here but I grew up 42 miles from NYC in Southern Connecticut, where some pizza aficionados think has the best pizza in the world. Ever heard of Pepe’s in New Haven?  I used to live in Manhattan and ate pizza at least four times a week since it’s cheap, quick and tasty. Oh, and did I mention I’m half Italian?

Courteney famously played a chef on Friends and throughout the pandemic, she often shared her own at-home cooking videos on Instagram. But does that make her an expert? Let’s break down what Courteney did and dissect it.

In the video, Courteney says: “A lot of people that are not from New York come into the city, and they can’t wait to have New York style pizza, and they don’t know how to eat it. So first what you do is dab it. Get all the oil off, and then New Yorkers, they like to cut the tip off, and they just do a little bite at a time. If you’re like from Sicily or whatever–roll it like a ‘pizza pie.”

She continues and brings in a couple sitting across the way for her shtick.

First, you gotta give Courteney props for going into a hole-in-the-wall pizza place and not some fancy pizza joint. She also didn’t go too low-end by doing it outside of one of those 99 cent pop-up shops, which might hit the spot late at night for some but isn’t the good stuff.

Courteney is obviously being funny but her deadpan delivery might be confusing for first-timers to just to clarify, no New Yorker eats pizza with a knife and fork. On top of that, she cut the tip off, which is arguably the best part of the slice. It’s equivalent to throwing the top off of a fresh cut watermelon. Yowza!

I know a lot of New Yorkers probably winced when Courteney dabbed off the oil with a napkin but I admit, I sometimes do the same when it’s too oily. That’s the Californian in me.

Finally, she rolled the pizza up like she was making a yule log. But New Yorkers just grab the slice and fold it in half and eat.

I like Courteney Cox but didn’t think the video was particularly funny. But I do wish she had shared the name of the restaurant because the pizza looked good and made me hungry. My favorite pizza in New York City is Don Filippo’s on 79th and Lex but mostly for sentimental reasons as our family apartment used to be around the corner so I was a regular.