Melissa Curtin's globetrotting and love of learning was fueled after traveling around the world on Semester at Sea in college. She has been a passionate elementary educator for over fifteen years. Melissa taught in England in 2004 thanks to a Fulbright scholarship. After teaching in the Maryland public school system for almost a decade, she left the conservative East Coast environment in Washington, DC, for West Coast living. Melissa is the Co-Founder and writer of LaLaScoop (Never Leave LA), an online hub for discovering the beauty and vibrancy of life in Los Angeles through a plethora of reviews on LA's hottest trends, places, products, people and happenings from the coastline to the Hollywood Hills. After living in LA for seven years, she is officially a proud, happy, warm Angeleno. Some of her favorite destinations include Formentera Island off of Ibiza, Costa Rica, Thailand, Fiji, Morocco, Vietnam, Belgium, Italy, Sicily, Prague, Egypt, Australia, Greece, and Paris.

My favorite shrimp experience was at the famous El Shrimp Bucket on the ocean in Mazatlan (Olas Altas 11), which I later learned has the same owner as Senor Frogs. Our feeding frenzy started just before a gorgeous pink sunset came over a small town on the water that featured shrimp tacos, shrimp ceviche, fried calamari (the best I’ve ever had) and ended with numerous buckets of shrimp prepared in ways I didn’t know were possible.

El Shrimp Bucket is by far the best restaurant I have been to for the freshest, tastiest, and largest shrimp. I wish I could ship their coconut shrimp to LA!

Who knew it was the Japanese who taught the Mexicans in the 1940’s how to shrimp fish due to an international agreement signed with Mexico and Japan? Before, Mexicans use to fish shark. After the Mexican shrimp explosion, the US became their main client.

Another food spot that should not be missed is Restaurant El Mesond LosLaureanos situated in a tiny rustic colonial town called El Quelite 30 minutes from Mazatlan where we were greeted by men and children on horses and donkeys.  Not only should you go there for the incredible food made from recipes that have been handed down for generations (still dreaming of creamy quacamole and their variety of meats), but the restaurant itself is incredibly designed and the lunch show is highly entertaining with Mexican hat dancing, a rope show, fire performers, and elaborate costumes. This indoor/outdorr restaurant feels authentic. Get away from your hotel and experience what it feels like to travel back in Mexican time.

After our sampling of numerous meats, such as Chilorio (a Mazatlan specialty prepared with shredded pork meat seasoned with chili sauce and spices that can even be enjoyed for breakfast), Sinaloa-style grilled chicken, Mochomo (cured smoked meat), quail, cow’s tongue, and many other juicy meat bites, we washed our meal down with a milky-like drink that was flavored with cinnamon (Horchata) and a fruity sangria-like beverage and finished with cactus fruit for dessert.

I enjoyed seeing the Mexican children from town and a couple guys on our trip played a traditional ball game outside in the street with two locals where they had to hit a very hard, almost steel-like, ball on their hips back and forth to one another.

Dinner at Pedro & Lolo Restaurant in the Centro Historico or Center City was the perfect way to end our last night in Mazatlan.

This district where we ate and danced outside reminded me of Europe as each street offered up a variety of music and a new band or artist. The Centro Historico is the cultural heart of the city named by the Federal Government in 2001 as a National Heritage site.  Artists from all over the world travel to take part in Temporado Primavera, the city’s high culture season. We were lucky enough to be there for the Day of Music.

The Mexican food from Pedro & Lolo had me whimpering “Oh My God” as each course came out. Trying to  calm my excitement for everything I tasted, my “OMG’s” became softer as I splurged on the creamiest quacamole, fried calamari, marinated squid that melted in my mouth, and carne asada or grilled steak.  Violins and then opera played in the background as the music flowed throughout the steamy sweaty night. Drinks were flowing at our long outdoor table nudged into the packed city center with revelers and vendors galore. Since it was our last group dinner and one writer’s birthday, our own happiness to be in a unique place lead to dancing in the streets to numerous exotic tunes.

Not wanting to stray from the hotel land? Head to the glamourous Pueblo Bonito Emerald Bay Resort & Spa where breakfast reminded me of being at The Ritz or The W Hotels.  Voted top 20 hotels in Mexico by Conde Naste and number 11 in Latin America by Conde Naste, this place should be on your list to see for at least breakfast or the spa.

The views, imported birds, hotel design, scenery, and food are worth just spending a meal there. One of my favorite discoveries on this trip was this delectable healthy green juice called jugo verde, which consists of cactus, parsley, spinach, celery, and cucumber along with orange or pineapple juice. Eggs to order, waffles, cheeses, yogurt, cereal, and every possible choice is offered up when you dine at Pueblo Bonito.

I have stayed at one of the three Pueblo Bonito resorts in Cabo before (Pueblo Bonito Pacifica Resort & Spa), and it was a perfect dream like the Emerald Bay Resort – quiet, beautiful spa, incredible food, large deserted sandy white beaches, and even beds that can be rented to sleep in on the beach overnight.

A fellow writer for the Examiner spent the afternoon in the spa and told me, “It puts the AAAH in SPA!” I had a chance to tour the spa which included a giant room with all sorts of different specialty showers and tubs that you could use to de-stress, with arrows telling you which one to go in next based on temperature, effect, and pressure. Definitely SPA worthy!

Safety, you ask? Everyone tells me to be careful “down there in Mexico,” but Mazatlan was a surprising destination where I felt safe wherever I went, even outside of the hotels. I walked alone in the Center of the City during the day and night and did not feel fearful. We met people who have lived there for 20 years from the US and England who expressed how they never had any problems nor felt unsafe, and one woman even expressed she had to be much more careful in the California city that she once lived than her ten years in Mazatlan. 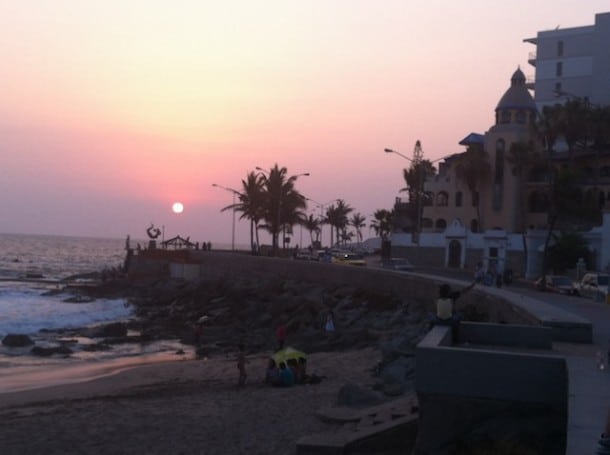 The sunset from El Shrimp Bucket in Mazatlan. 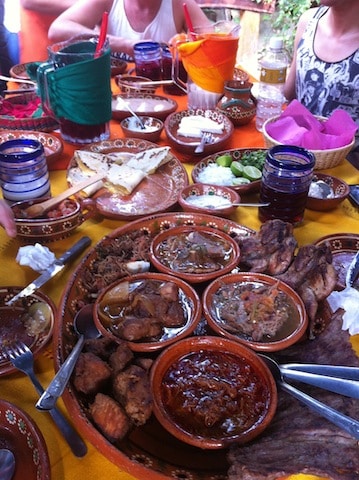 An incredible spread of Mexican food at 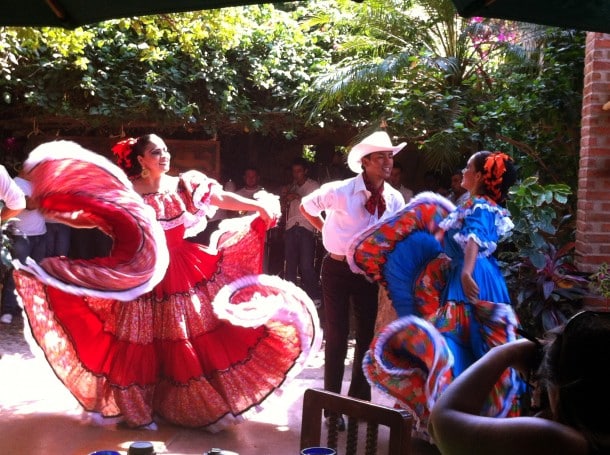 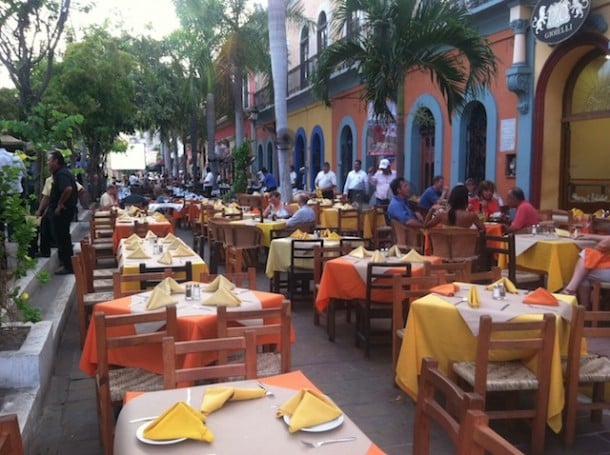 The Center City of Mazatlan at the Lolo before the food revelry and dancing began. (Photo credit: Freddie ) 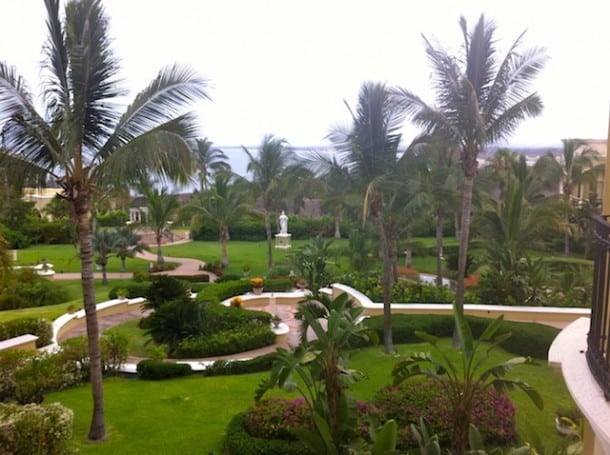 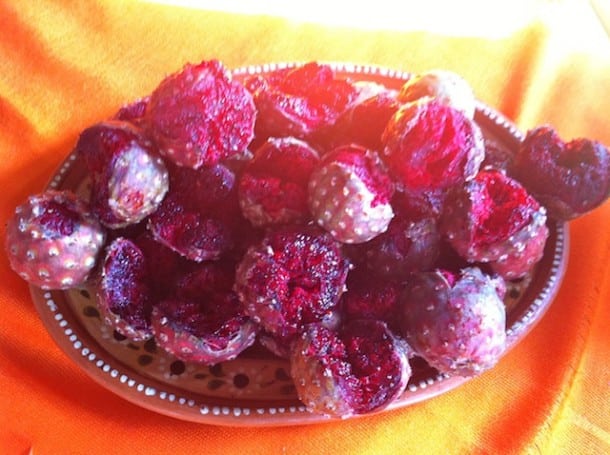 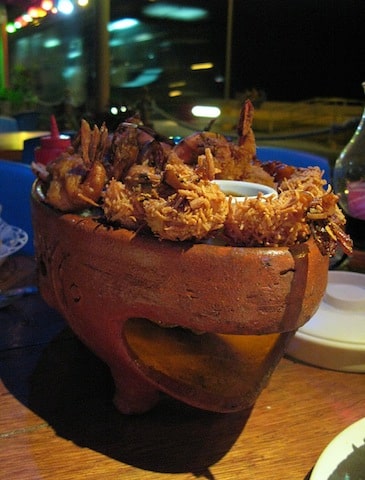 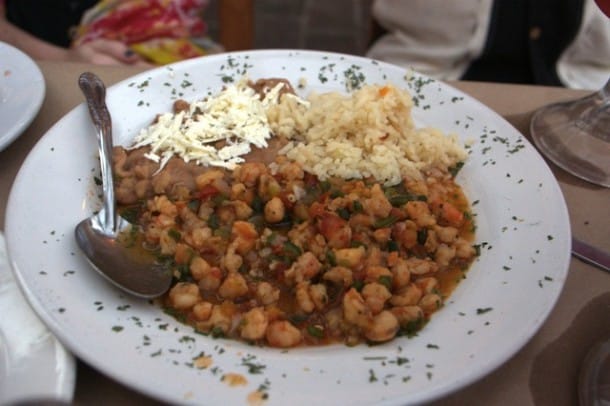 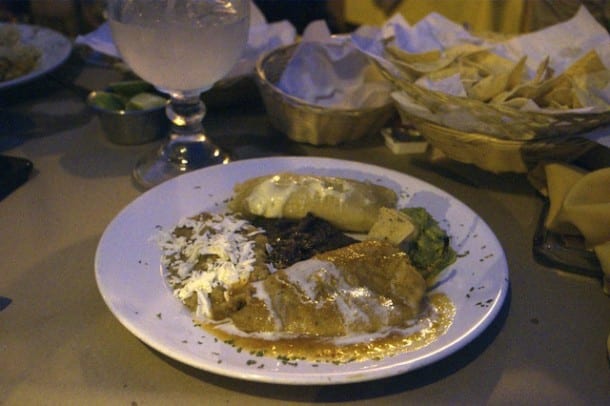 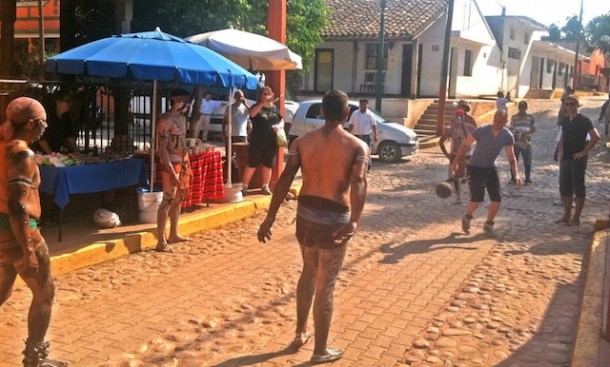