Travel writer and digital nomad JT Genter, who is a great follow on Twitter since he flies so much, just had an interesting exchange with American Airlines about a disturbing incident he witnessed aboard an American Airlines flight (AA969) from Dallas to Los Angeles a few hours ago.

JT tweeted: “Who would’ve guessed?! The way-too-drunk guy (who probably should have been denied boarding) puked all over @AmericanAir first class on final approach into LAX.  🤢”

Who would’ve guessed?! The way-too-drunk guy (who probably should have been denied boarding) puked all over @AmericanAir first class on final approach into LAX. 🤢

American Airlines chimed in with their standard: “We appreciate you letting us know about this.  We’ve shared your comments with our leadership team for review.”

JT pushed back with: “You have a paid international business class passenger that was completely sprayed by vomit by a stranger who is waiting for anyone in the airport to provide assistance. You need LAX to act immediately in this situation, not pass along information for review.

“The poor stranger next to him in the window seat got sprayed, as did the guy in front of him. Flight attendants were saints in doing the most with an awful situation and the pilots pushed through to landing.

“It wasn’t just being blackout drunk. During boarding, he was loudly slurring to the passenger across the aisle about how much sex he has with his girlfriend. At that point, it was a jolly drunk – but inappropriate and a clear sign he was quite intoxicated.”

American Airlines responded with: “The details are being shared with our leadership team to look into further. A supervisor at the airport can provide immediate assistance.”

JT rightly asks American to “Define immediate. The passenger waited around for anyone to help him. Customer service rep eventually gave him a phone number to call. No supervisor ever came. No one provided him any assistance getting a change of clothes out of his vomit-spewed clothing.”

American Airlines responded with: “We’ve reached out to our team at LAX to get some assistance for the impacted customer.”

American Airlines: “We have the details and sent it over. Thanks for bringing this to our attention.”

You have to give American Airlines’ Twitter team credit for continuing to follow-up and sending the information along to their team members as there’s not much they can do from an office at DFW airport. However, the flight attendant(s) who are supposed to be greeting passengers as they enter, should have noticed this guy was drunk or at least the flight attendant serving pre-takeoff drinks as he was seated in first class. If the man was as drunk as JT says he was, and I believe him, then the FAs didn’t do their job. This whole ordeal could’ve been avoided by denying the drunk passenger boarding.

I’ve seen passengers denied boarding before for this very reason and I’ve seen others slip through the cracks. Once, on a Delta flight, an elderly couple came onboard and smelled so bad (I’m not exaggerating), that the row in front and behind us had to hold their shirts over their nose for the entire flight. Fortunately, it was a short flight (90 minutes) but the flight attendant brought me to the back of the plane and said, “Why didn’t you tell us this before we took off? We could’ve denied them boarding.” I didn’t have the heart since they were old and I felt bad but the smell was truly unbearable.

I’ve also seen countless passengers come on board sober but get served way too much alcohol, including once where my seatmate was someone from a famous band, who had performed at the Super Bowl just a few hours prior and the flight attendant just kept giving him drink after drink. He finally passed out on descent into LAX and thank God he didn’t throw up on me.

RELATED: Want to Sit Next to a Celebrity on Your Next Flight? Sit Here

I realize some people are nervous fliers so they take to alcohol to calm their nerves. This is obviously a bad idea for a number of reasons, including what happened on JT’s flight. 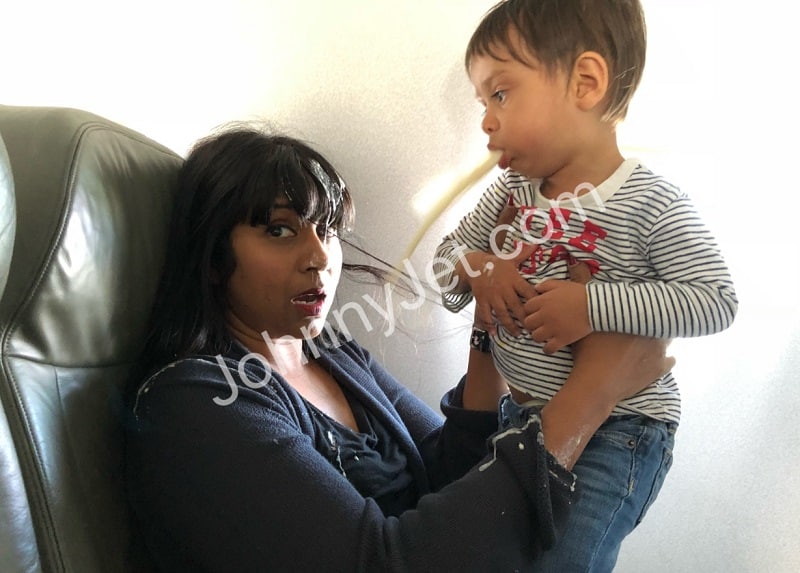 The only time I’ve witnessed someone throw up on someone else was when my then one-year-old son  tossed his cookies on my poor wife and I just happened to capture it as I was taking pictures of takeoff across the aisle and I guess I kept snapping when I heard her gasp because I later saw I had a Kodak moment. BUT: We learned a valuable lesson from this experience. We ALWAYS pack an extra set of clothes for everyone in our carry-on bags just in case something like this happens and my wife never leaves home without a couple of wet bags, which can be used to store wet or dirty things until you can clean them. Seriously, if you’re not traveling with wet bags, you should be. They’re also great for wet swim clothes if you have to pack up your things before your swim gear can dry. Check out these options of wet bags on Amazon.

RELATED: This Travel Hack Can Save You Hundreds of Dollars When Booking Flights

I know other people have witnessed way worse, including @EricPinckert who left this comment on JT’s thread: “Grim. One flight I was seated in an exit row (!) and as we were waiting to push back from the gate to depart the gentleman next to me started muttering “It’s about time they landed 🛬 this Mother F&[email protected]” and promptly proceeded to regurgitate gallons of his pre-flight beverages.”


Have you ever encountered someone totally inebriated on a plane? What happened?

Grim. One flight I was seated in an exit row (!) and as we were waiting to push back from the gate to depart the gentleman next to me started muttering “It’s about time they landed 🛬 this Mother F&[email protected]” and promptly proceeded to regurgitate gallons of his pre-flight beverages.