Back in October 2013, I boarded a flight that I wasn’t originally supposed to be on. I wasn’t feeling well and so postponed my flight by a day. Little did I know then that because of this change, I would end up on what would turn into the most emotional flight of my life. It’s now nine years later and still, I think of this flight often, but especially on Veteran’s Day. Here’s what made it so emotional. 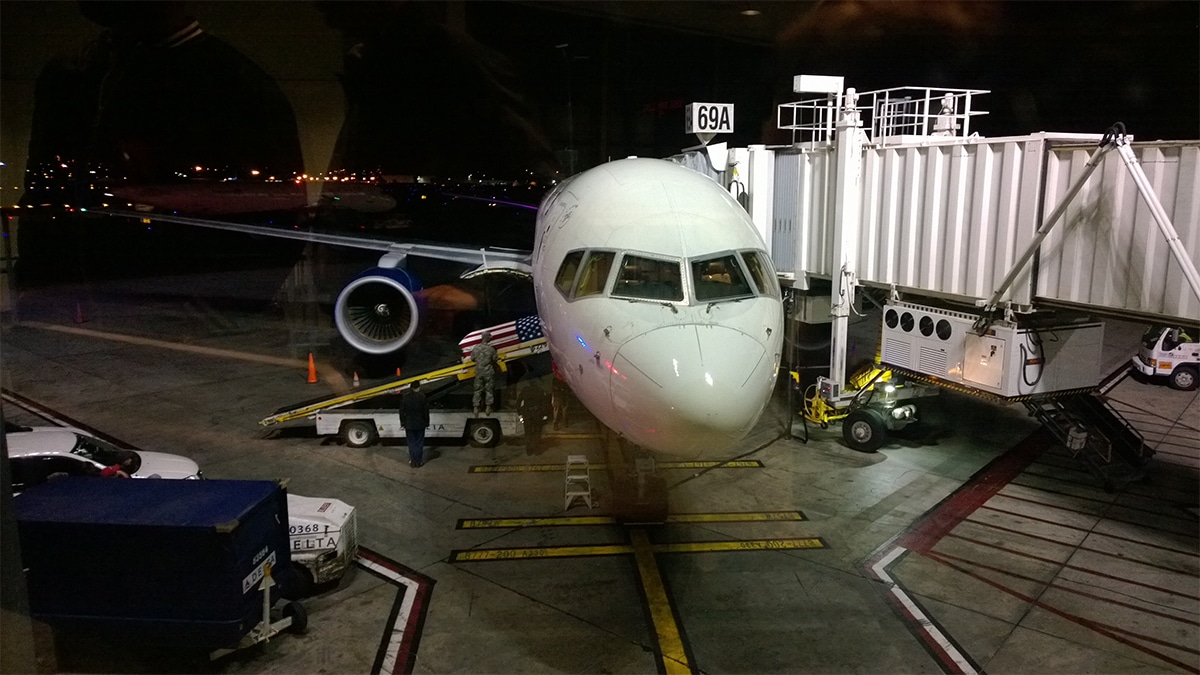 Delta Flight 2255 from Atlanta to Los Angeles seemed to be an ordinary flight with the exception of Candy, who was the most loving flight attendant I’ve ever encountered. Besides using her southern charm to quickly defuse every situation, she began her welcome announcement by thanking the handful of uniformed soldiers on-board for serving our country. Her poignant message was followed by applause and put into perspective that none of us would be able to do what we do if it weren’t for these brave men and women.

RELATED: 48 Ways to Honor a Veteran For Their Service This Veteran’s Day

But this transcontinental flight turned out to be everything but ordinary. We later learned, when the captain got on the PA system about 45 minutes prior to landing, that we were transporting a fallen soldier. The plane went quiet as he explained that there was a military escort on-board and asked that everyone remain seated for a couple of minutes so the soldiers could get off first. He also warned us not to be alarmed if we saw fire trucks since Los Angeles greets their fallen military with a water cannon salute. See the video of this extraordinary experience below.

A few minutes after touchdown, we did indeed have a water cannon salute, which I’d previously only experienced on happy occasions like inaugural flights. This time, the water glistening on the windowpanes looked like tears.

RELATED: Travel Tip: Give Your Upgrade to a Soldier

Passengers in the airport must have been worried when they saw our plane pull into gate 69A, as we had a full police and fire escort, front and back.

I was on the left side of the plane and later realized that the family could be seen off to the right, standing with the United States Army Honor Guard. According to Wikipedia, each military branch has its own honor guard, usually military in nature, and is composed of volunteers who are carefully screened. One of the primary roles of honor guards is to provide funeral honors for fallen comrades. 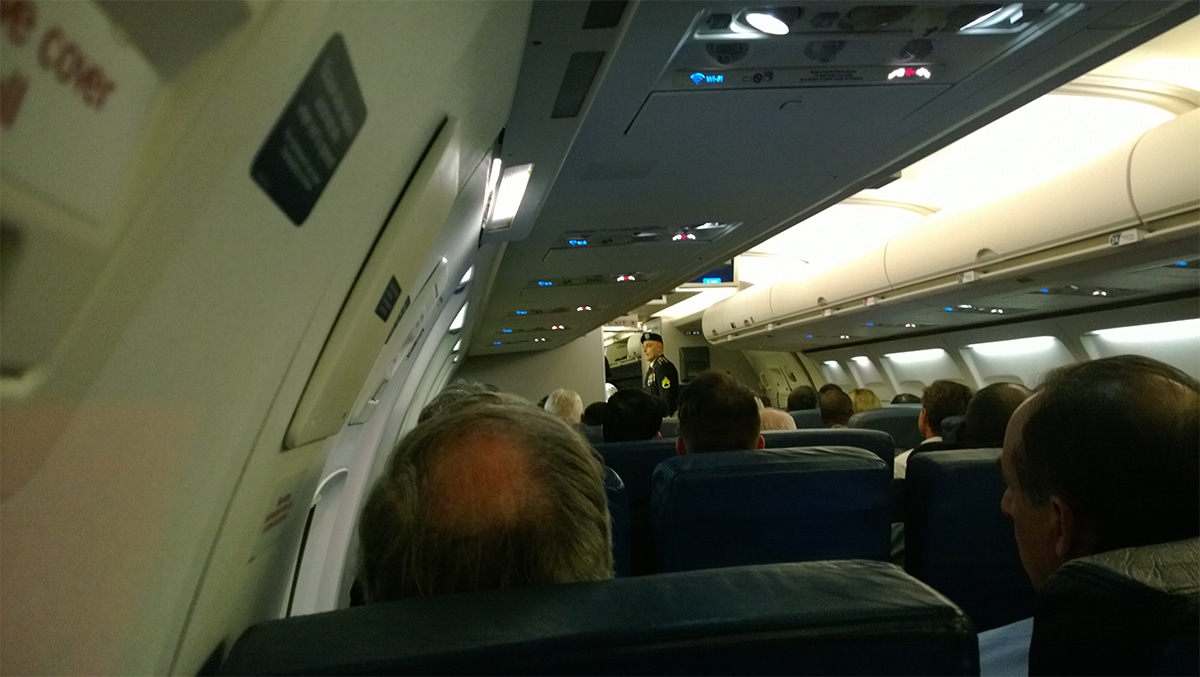 When the jet door opened, another military officer addressed the escort who was standing at attention. He then stepped on the plane and told us passengers, “I just addressed the escort. It is a sworn oath to bring home, to the family, the fallen.” He paused and then said, “Today you all did that, you are all escorts, escorts of the heart.” He then thanked us for our time and walked off the plane.

As you can imagine, everyone was silent and no one got up, not even that person from the back row who always tries to be the first off the plane. I’m sure that most had meteor-sized lumps in their throats and tears in their eyes like I did. 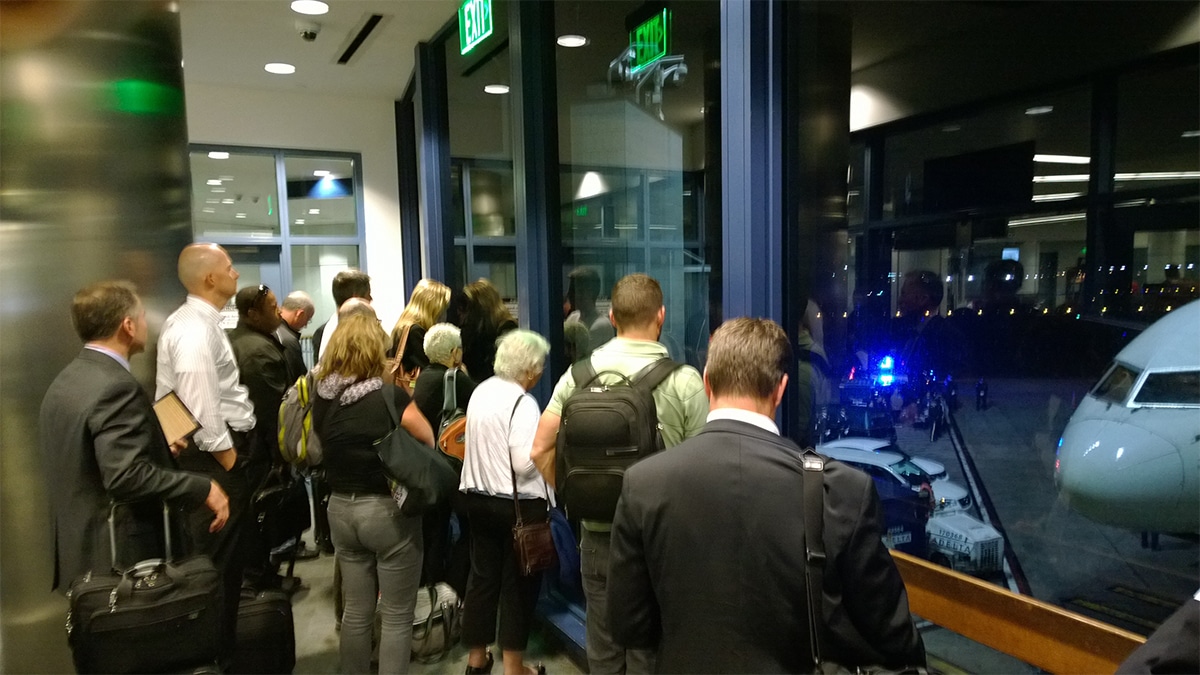 It only got more emotional when I deplaned. There were many passengers, who are normally in a hurry to get home or make a connection, standing by the window to witness something truly moving. To see the Honor Guard and family waiting, while LAX baggage handlers and a military loadmaster removed the flag-covered casket first from the cargo hold, was humbling to say the least. I’m not sure if it was the fallen soldier’s mother or wife who I watched slowly approach the coffin while a few other family members, wrapped in blankets, stood near with a dozen or so of the Honor Guards standing in salute.

As soon as I saw her reach out to put her hand on her baby’s casket, I walked away.

This ordinary flight became extraordinary and is one that I will never forget.

Thank you to all the military who protect our beautiful country and let us live the lives we are able to lead. Without you, we would be nothing. And thank you to the Honor Guard for making sure that these fallen soldiers, warriors, and heroes are not treated like just any piece of luggage as they used to, but rather with the care and respect they so rightly deserve.

JOHNNY’S NOTE: I had no idea this story and video would strike a chord with so many people. I’ve received literally thousands of comments and emails but my favorite was the one left on Yahoo from reader Indiana Joan. She said: