Flying My Dad Back to Florida With Help From Blacklane 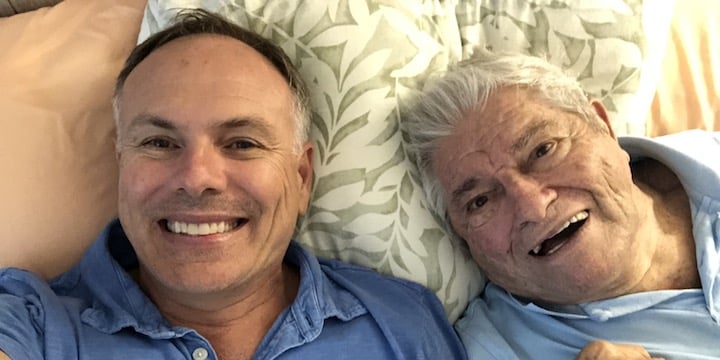 I didn’t travel this week, but I feel like I did after building a relatively last-minute trip (72 hours out) for my dad from Connecticut to South Florida. My dad’s 90, and last month I got him a ticket to Connecticut to escape Hurricane Dorian, which was expected to wallop Florida where the Big Man now lives. Fortunately, that didn’t happen and my dad’s place was spared. And since he flew to Connecticut anyway, he was able to spend time with my brother, my sister, and his grandchildren and relatives.

This week, the time came to fly him home. I could’ve purchased a coach ticket with cash for cheap, but he’s 90 and he has a bad back, so I used 25,000 American Airlines (AA) miles so he could fly first class from New York’s JFK airport (44 miles from where we grew up) to Miami. AA flies this route daily with two wide-bodies: an old 767 and newer 777-200. Of course, I chose the latter since the seats are lie-flat and the plane doesn’t break down as much. On this route, besides the extra legroom, first class comes with two free checked bags, free food and drinks, and early boarding. Plus, you don’t have to pay extra for a decent assigned coach seat. It’s well worth the extra 12,500 miles when it’s available.

I wanted my dad to have a seamless experience, but neither my brother nor my sister could take him to JFK, and my other sister (in Florida) couldn’t pick him up in Miami, so I used some of my Blacklane credits (I’m a brand ambassador) to sort him out.

First, I ordered Blacklane car services to drop him off and pick him up at both airports. Then, I ordered Blacklane’s airport concierge service (PASS) so a greeter would met him curbside at JFK and escort him to check-in, through security, to the lounge (it costs $50 extra if you don’t have access with your ticket or credit card), and finally onto the plane.

If you order the concierge service on the arrival end, which I also ordered for my dad, another agent will wait on the jetway to greet you (or the traveler) the moment you step off the plane. The greeter then assists you by taking your bag(s) and walking you to immigration (if you’re traveling internationally), to baggage claim, and then to your arranged transportation, which in my dad’s case was a Blacklane car. On top of that you get to bypass any lines, which is why the service is popular with business travelers. It’s also great for those who get nervous traveling to places they haven’t been. Note: Blacklane PASS generally requires at least 72 hours notification to arrange a concierge.

In the end, the trip was a success. He told me that everything was perfect and the flight even got in early.