One thing American Airlines should be commended for is their treatment of U.S. soldiers. I truly debated if I should write about this or not. I don’t want it to look like I did it for anything other than what it was … the right thing to do. But I’m hoping that bringing attention to it just might inspire others to do the same. RELATED: Escorting a Fallen Soldier Home Turned an Ordinary Flight Into the Most Extraordinary Flight of My Life 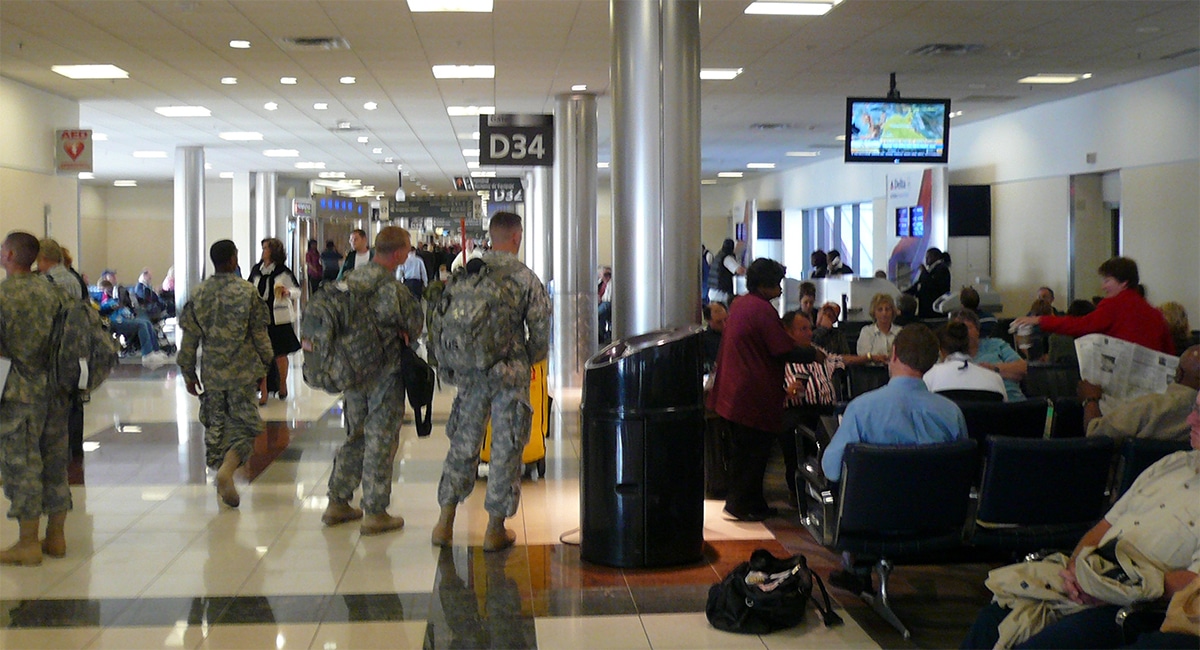 This happened a while back but here’s the story, which I think is as relevant today as it was then: After getting on a particular flight, I had a bird’s eye view of boarding from seat 1E, a comfortable bulkhead seat on a 757 jet. I always look down into my travel journal once I get on early so I don’t feel the envious eyes of coach passengers. But I perked up when I heard the flight attendant welcome a soldier onboard. I looked up and sure enough, a fully decked-out army man was standing in the aisle.

RELATED: 48 Ways to Honor a Veteran For Their Service This Veteran’s Day

By the time I talked my conscience into giving up my seat, he was gone. I got up and asked the friendly flight attendant if it would be OK if I switched seats with the soldier, and she almost made me cry when she said, “Really? That is so nice of you, and you will make his day as he is headed to Afghanistan. He had a tear in his eye since he was just saying goodbye to his family.”

Giving up your first-class seat

Then all of a sudden, I became emotional, thinking, What if that was me not being able to see my loved ones for months and quite possibly ever again? I slowly waded through the plane, hoping he wasn’t in a middle seat in the way back, when I spotted him on his cell in 19D (an aisle seat). When I pointed to him he immediately got up, thinking I was headed to the window seat. I said, “You’ve been reassigned to 1E.” He said, “Sorry?” I looked him in the eye and said, “Thank you for serving our country.” The older man seated behind him said, “Are you giving him your first-class seat?” I didn’t want to bring attention to it so I just smiled and nodded, but the man kept saying, “That’s a beautiful thing.” The soldier, you could tell, was a well-mannered 20-something-year-old. He said to me, “Sir, you paid for that seat.” I said, “No, I didn’t, it just cost me a few upgrade certificates.” He extended his hand and looked at me like I was the nicest guy in the world, when in reality, I’m just one of the millions who had taken these brave men and women and their service for granted. Not anymore.

The flight attendants made me feel like I was Gandhi as they kept offering me free drinks. Then, when another flight attendant found out that I was the guy who had given up his seat, she insisted on refunding the $6 I paid for the turkey and cheese croissant sandwich. I felt terrible because there was another soldier sitting across the aisle from me but I only had one seat to give. I quietly offered to buy him food, but the flight attendant said, “Oh no, we always give soldiers free food.” Now that’s commendable. On top of that, I heard one of the flight attendants, as she kneeled down next to him, say, “Thank you very much for serving our country and doing what you do.” When we landed, the crew made an announcement publicly thanking the soldiers on-board for their service and wishing them luck in Afghanistan and Iraq, and most of the people on the plane clapped.

70 Comments On "Travel Tip: Give Your Upgrade To A Soldier"