Heads Up: Toronto’s Pearson International Airport is a MESS, You Might Want to Use YTZ 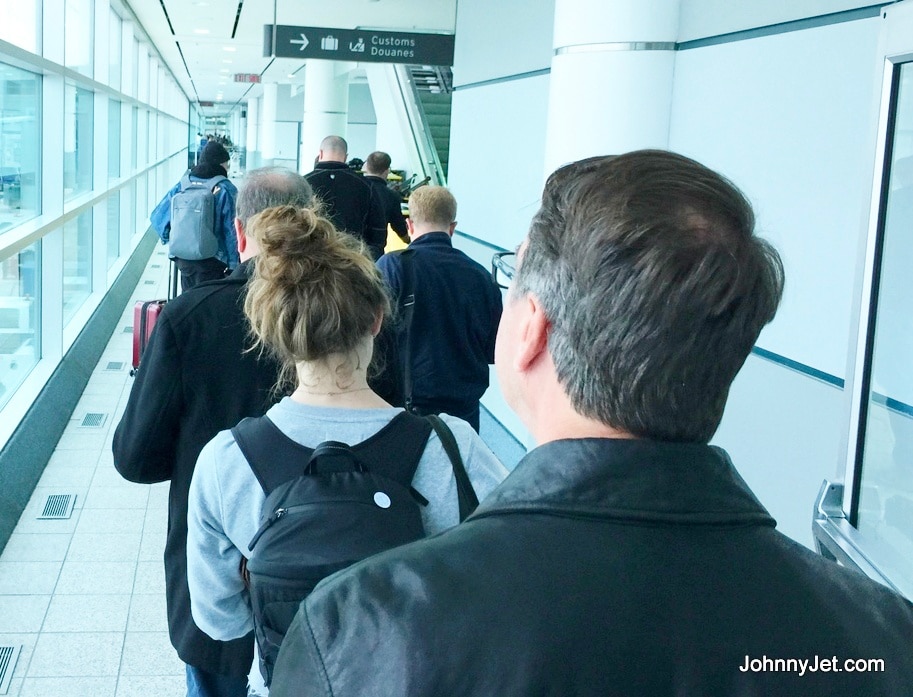 My wife is from Toronto so I’ve been to Pearson International Airport dozens of times. Natalie and I used to go every three months but because of COVID, we haven’t been since 2019. We’re scheduled to go next month but I have to tell you, after seeing a few friends’ posts on Facebook and tweets on Twitter, I’m dreading our arrival.

Arriving at Pearson has never been that pleasurable. It’s usually a crazy long walk to immigration and the agents aren’t usually very friendly. But because I have NEXUS, which is similar to Global Entry, but for bypassing the long Canadian immigration lines, it’s never been that bad.

Then, last night, I read my friend Jenn’s Facebook post, in which she wrote: “There’s a new “fun” thing at Toronto Pearson for international flights 🙄—“customs holds” where they won’t let you deplane so they can ”control the flow” of passengers. Current wait time on the plane at the gate? 1 hour and 10 minutes.”

Over an hour just to get off the plane? For me, with a two- and five-year-old in tow, that would be torture and with COVID surging again, it’s dangerous. I understand that every industry, but especially travel, is having staffing issues and it appears that the Canada Border Services Agency (CBSA) are short-staffed as well.

For the last year, I’ve been hearing about this “customs hold” from Canadian friends but they’ve said it’s only been about a 10- to 15-minute wait. When I saw Jennifer’s post and her friends’ comments, it seems it’s gotten a lot worse, which makes sense as there’s been a huge surge in the demand for travel.

One of her friend’s commented: “It totally sucks. I was stuck waiting for about 40 minutes to deplane when I returned from England last week. I was in business class and I told the attendant I had a Nexus pass which means I go through a different line than the regular customs. Didn’t get me off any faster. It was not logical. And as is always the case there was no line up at the Nexus exit that day.”

My wife, son and I all have NEXUS but my two-year-old daughter doesn’t and to use NEXUS, everyone in your party must have it. If you’re wondering why Olivia doesn’t have it, it’s because we can’t get an appointment to complete her application. She was conditionally approved a couple of weeks before the pandemic. But then her application was canceled after two years of not getting an appointment, which made no sense since you couldn’t even get an appointment in Canada as the NEXUS offices were (and still are) closed. There are NEXUS offices on the U.S. side but they just reopened and they’re on border towns so it’s not geographically friendly for Southern Californians. GOOD TO KNOW: Just in case you’re in the same situation, here’s the trick I’ve learned to extend the two year limit.

So, waiting on a plane for 40 minutes wouldn’t be so bad if you have no line at NEXUS but since that won’t be the case for us, it’s going to suck. I’m hoping to get around it by flying mid-week and arriving mid-morning to avoid red-eyes and west coast flights, but we’ll see.

It looks like YYZ is not only having a problem with arrivals but departures as well. The Greater Toronto Airports Authority (GTAA), which manages and operates Toronto Pearson International Airport, wrote:

“There are three government checkpoints within our airport:

“Wait times for departing passengers at security screening points are being negatively impacted by staffing challenges at CATSA. US-bound travellers are impacted both by CATSA and USCBP staffing shortages.  Moreover, international arriving passengers are facing bottlenecks and very lengthy delays in border processing—a direct result of legacy public health requirements in response to the COVID-19 pandemic. To prevent severe passenger congestion, airport and airline staff are forced to hold passengers on planes and deliberately meter the flow of arriving travellers into the customs hall for processing by CBSA, a process that we know and appreciate is incredibly frustrating for passengers.”

The GTAA is blaming the U.S. and Canadian governments and it seems like a total nightmare. On top of that, if you can believe it, friends of friends say it’s even worse for people picking up loved ones outside. One commented: “I waited an hour in my car to pick up someone at arrivals last night. Traffic was bumper to bumper. Kevin took less time deplaning than I took to get to him.” It wasn’t clear if Kevin was a domestic or international passenger but either way, I think it’s best to avoid YYZ until they sort this out.

After writing this post, I’m going to look into switching our flights from YYZ to Toronto’s City Airport (YTZ), which is much smaller and right in downtown Toronto, so you can actually walk to your hotel. See photo below.

11 Comments On "Heads Up: Toronto’s Pearson International Airport is a MESS, You Might Want to Use YTZ"