How to Get Into the Emmys Without Being a Star 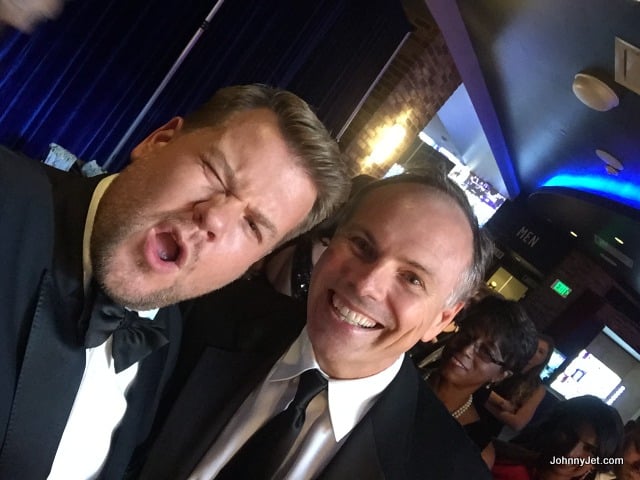 If you’re following me on social media (Facebook, Instagram, Twitter), then you know I attended the 69th Emmys in Los Angeles as a guest of Chase. They invited me so I could experience and write about one of the perks of being a Chase Sapphire cardmember since they offer exclusive packages like attending the Emmys, The Sundance Film Festival, PGA Championship, a Private Dining Series and more. 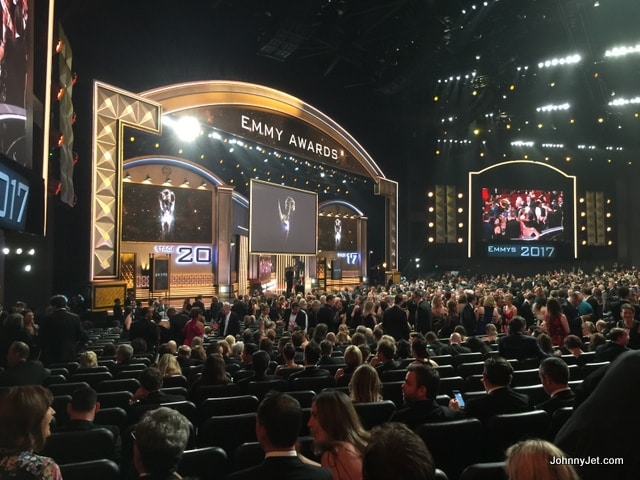 Cardmember-exclusive events can be purchased either with cash or with points. For the Emmys, they offered a variety of packages so prices varied but the cheapest was mezzanine seating with complimentary parking at $525 or 52,500 points. The most expensive was the Ultimate Weekend, the highlights of which included watching the Emmy Awards rehearsal and live show, attending the nominee reception and Governors Ball. Cost: $3,500 or 350,000 points.

I took part in one of the middle tier packages, which included orchestra seating at the Emmys and dinner at the Governors Ball. Cost: $2,300 or 230,000 points. Keep in mind, Emmys tickets are not available to the general public so the only way you can get in is having a serious Hollywood connection, winning a contest or being a Chase Sapphire cardmember.

So what do you get when you buy this package? I’ve highlighted everything in bold below.

For starters, you get complimentary valet parking. Tip: If you aren’t coming from a downtown hotel, leave early and follow directions from a traffic app. Fortunately, I took my own advice and arrived to the show, which takes place at the Microsoft Theatre in L.A. Live (next to the Staples Center), at around 2:30pm. Waze took me on a route I don’t normally take but I avoided traffic. 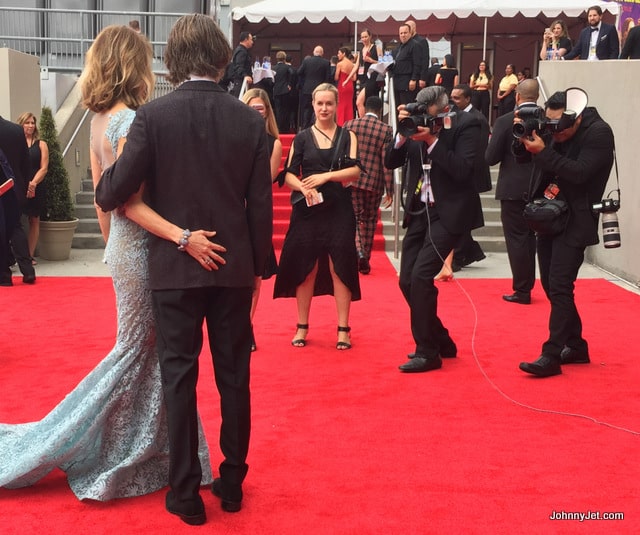 Once you follow the directions that Chase gives you and you check in at their table right next to the Red Carpet, you get to walk the Red Carpet with all of the Emmy nominees, celebrity presenters and guests. I’m sure you will appreciate the army of servers with trays of cold drinks including mini bottles of Fiji water. 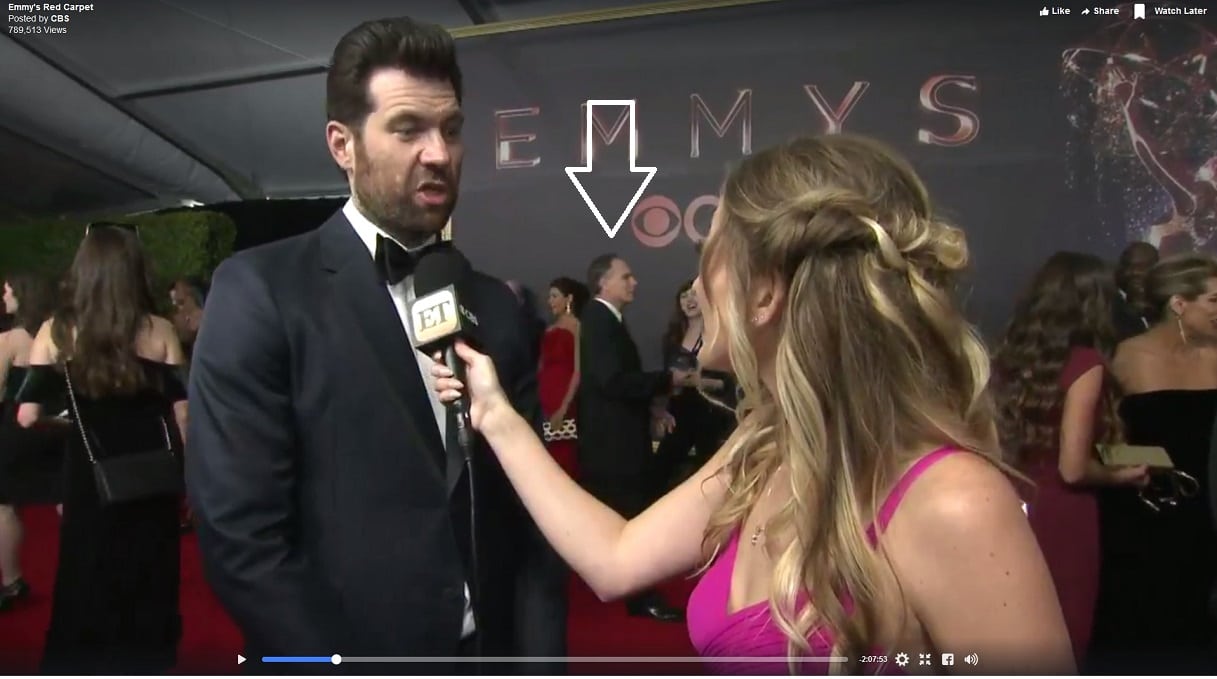 We actually walked the Red Carpet twice, both times being escorted by Emmys security and a Chase representative in a small group. There were five people in my group and what’s funny is that I actually saw us on a rebroadcast when I got home that night and later online. Photo above.

The first time you walk the Red Carpet, they ask you not to stop because time is of the essence and they want you to get your special photo opportunity on the official Emmys Red Carpet before the mega stars arrive. FYI: My photo (above) was taken by Phil McCarten/Invision for the Televison Academy. 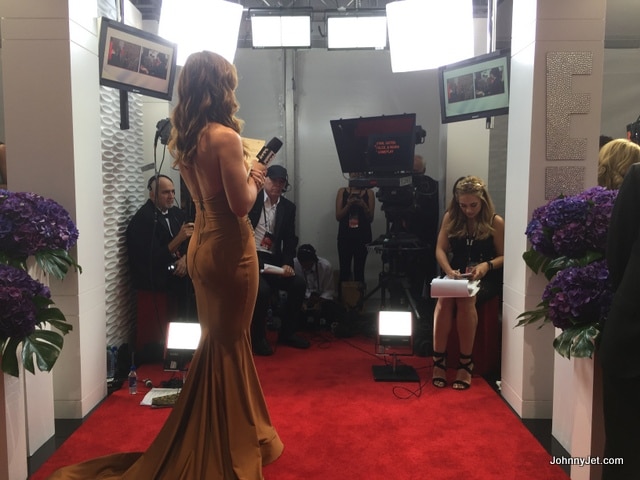 If you can’t tell from TV, the Red Carpet is a zoo as every major news organization has a booth. The beginning has all the top outlets and then it slowly trails off to international broadcasters and websites. Booth sizes go from large to just a place holder. 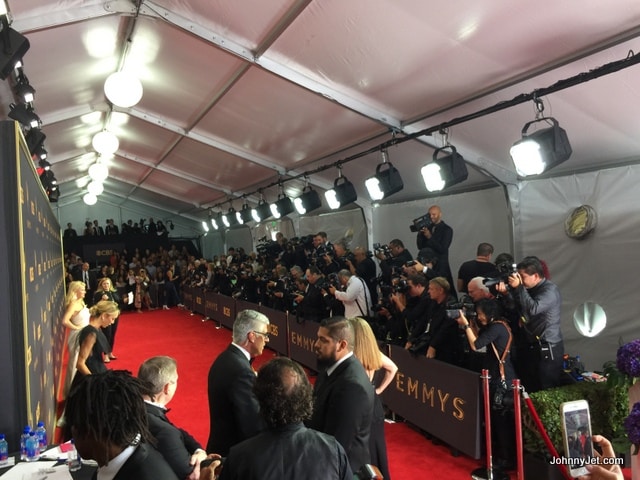 At the end of the Red Carpet is where hundreds of photographers are yelling at stars to look at their camera and turn a certain way. There are multiple stars on the carpet at a time and while I was getting my photo taken there, the former stars from Queer Eye for the Straight Guy and the host of E! Giuliana Rancic were on it. 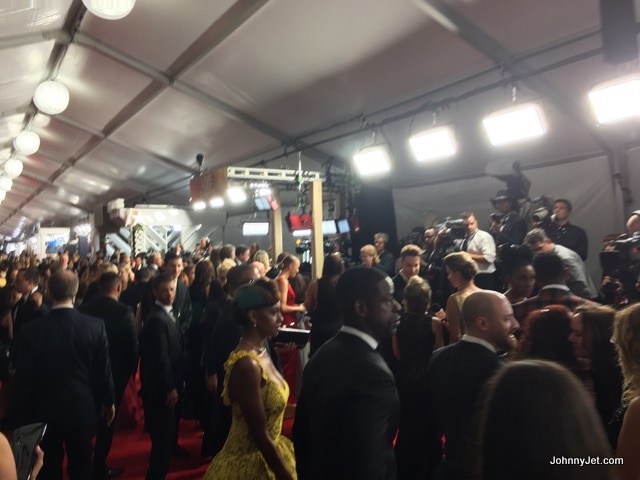 But I walked by a ton of stars along the way including Felicity Huffman, William H. Macy, Sterling K. Brown and more! 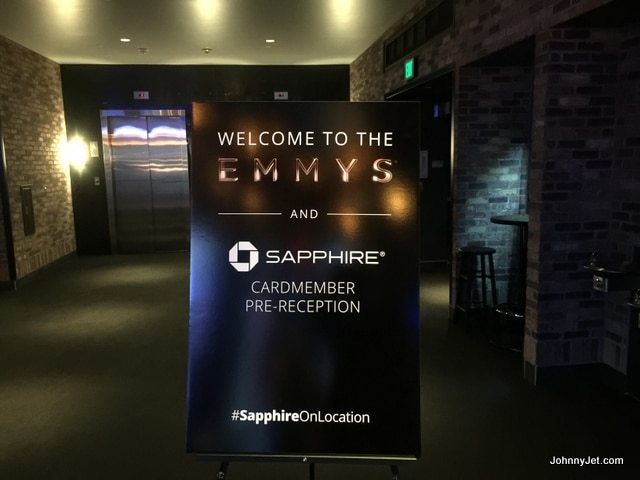 Once you enter the Microsoft Theatre, you get escorted to Chase Sapphire’s Cardmember-Only Pre-Reception, which is downstairs in a room that could fit hundreds but there were only around 15 of us. 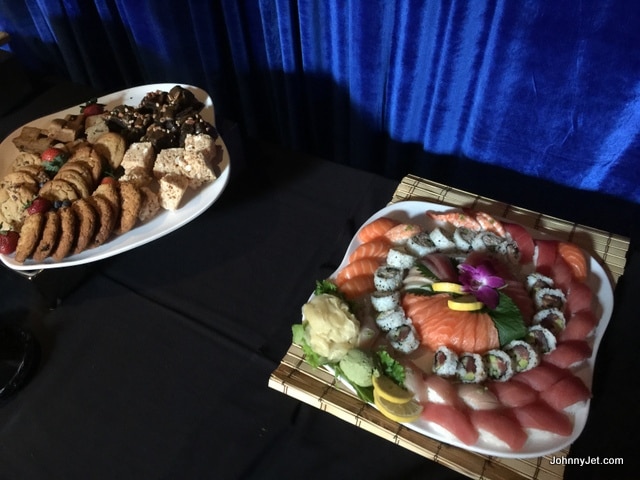 The room has hors d’oeuvres, an open bar and an actual Emmy award for us to pose with. 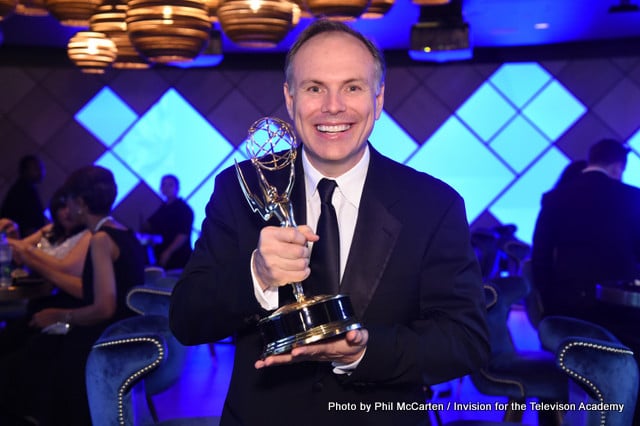 My photo (above) was taken again by Phil McCarten / Invision for the Televison Academy. 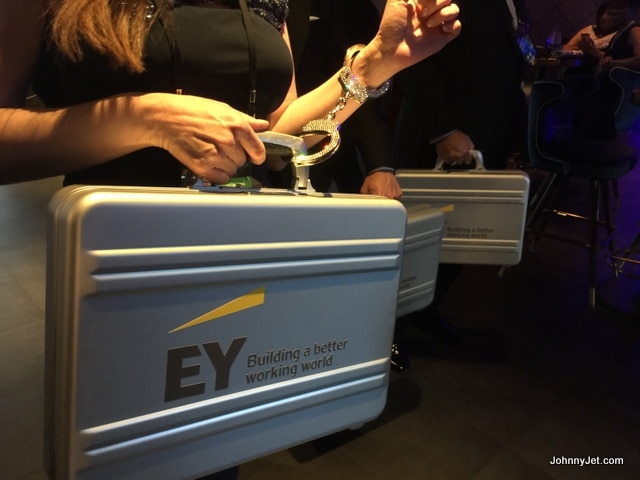 Chase then brought in some VIP Emmys representatives like three Ernst & Young accountants who all had identical suitcases with a handcuff. One of the three had the results and they were all nice people who were happy to answer any questions. Of course, I put my foot in my mouth when I said, “Let’s hope we don’t get the same ending as last year’s Oscar’s when they announced the wrong winner!” The three just looked at me as I laughed and when it got awkwardly quiet, I tiptoed away. 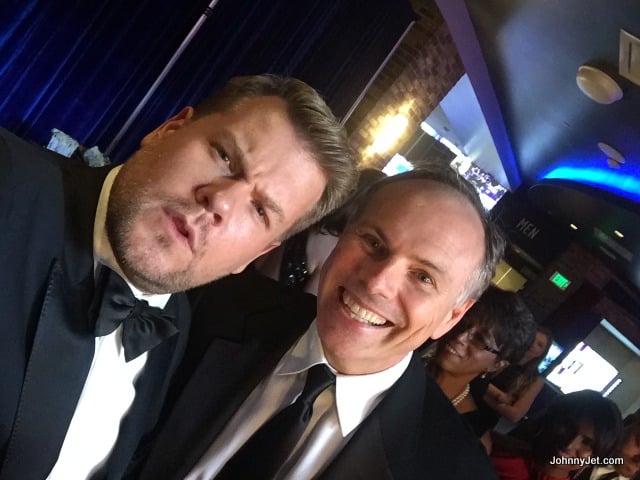 The highlight of the pre-reception, besides the addictive brownies, was a meet and greet with Television Academy VIPs. They brought in James Cordon, who was super-friendly and a machine when it came to taking selfies. They also had a make-up touch-up artist and even though I probably needed it, I stayed away. Tip: Bring a bottle (or two) of water into the Emmys because it’s a long show and to buy water ($4.50) there’s a tremendously long line. 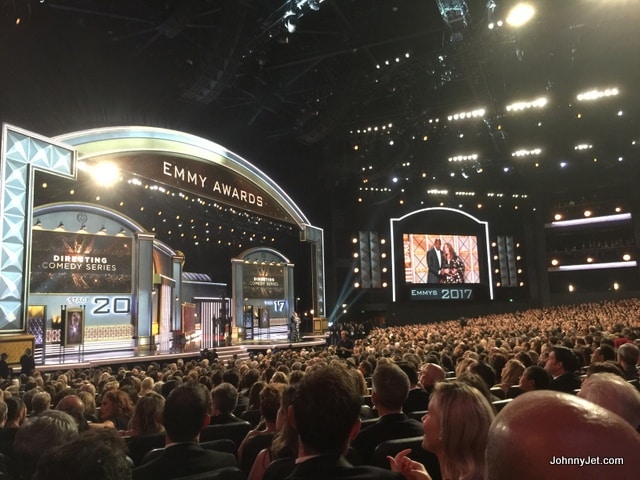 The announcements start around 4:30pm to take your seats. The Microsoft Theatre seats 7,100 people so they need to start getting everyone in early. The show starts promptly at 5pm and we had orchestra-level seats. I was in row AA, which I’m guessing was about 27 rows from the stage.

FYI: The Chase Emmys package says it includes an official Emmy Awards program book but everyone gets one when they enter (you can actually take two) and most audience members left theirs behind.

The award show is three hours long and in my opinion, an hour too long. Many audience members get up and hang out in the lobby to talk to their friends/colleagues, which is why the Emmys and all the other award shows have so many seat fillers to make the audience look like they are always in their seats. We were so close to the stage that I could read the teleprompter so I could tell when the presenters were going off script or not. Most didn’t but the winners get a 45-second countdown once they start speaking and then it starts blinking “wrap it up” and after 10 or 15 seconds, it flashes red and then usually the music begins … except with Nicole Kidman. They let her go on, which was why the audience booed when they cut Sterling K. Brown’s acceptance speech. 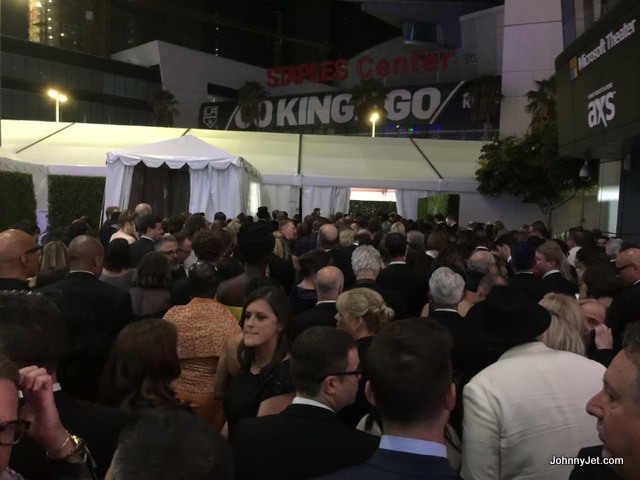 When the show is over, it’s a madhouse to get out including for the stars. It took at least 20 minutes to get out and the person next to me quipped that they were glad there wasn’t a fire. I was thinking the same thing. If you go next year, I recommend just hanging out in your seats to avoid the sardine can-like walk. 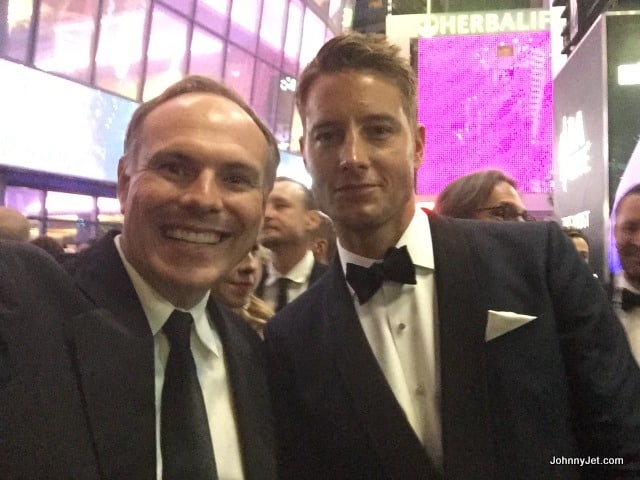 The only thing positive about the huge crowd is that you get to walk with the stars and they can’t run away from you. Ha! I walked with Justin Hartley from This Is Us to the Governors Balls and he was a really nice, down-to-earth guy. 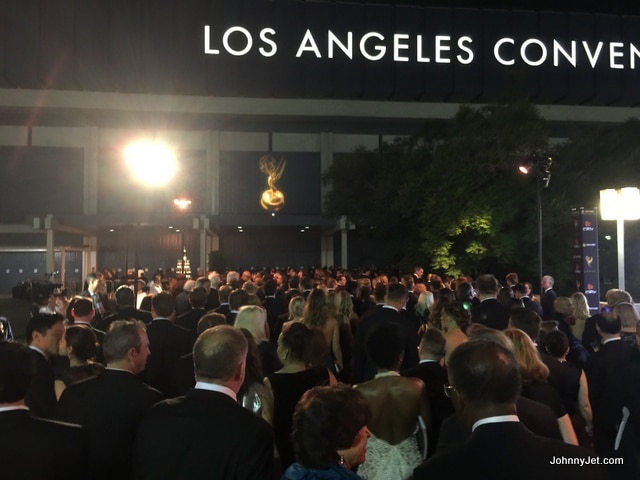 Without a doubt, the highlight of the evening is gaining entry to the ultimate after-party — the Governors Ball! The walk from the theatre to the Los Angeles Convention Center is a solid, long three blocks so bring some comfortable shoes (I saw one lady walking barefoot since her high heels hurt too much. I can’t blame her.) 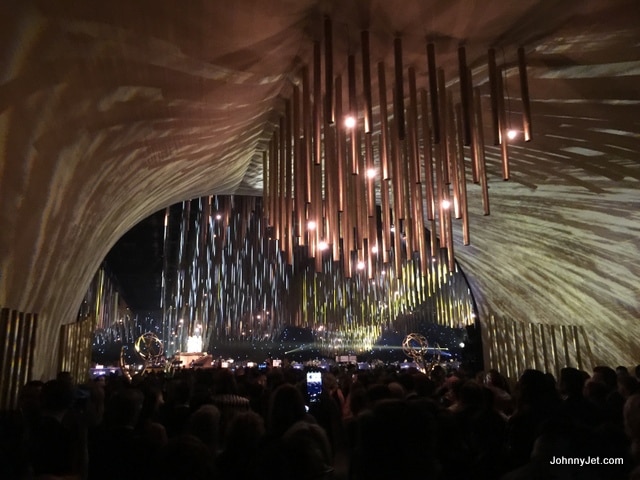 Everyone was wowed by how the massive, boring convention centre was transformed into a fairy tale-like atmosphere. One of their secrets was keeping it really dark and adding brilliant mood lighting and more than 5,000 gold-colored, paper tubes that ranged in length from two to 20 feet suspended from the ceiling. 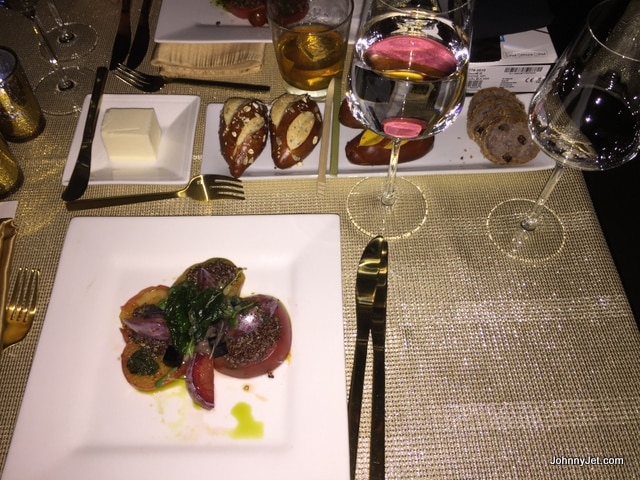 They had hundreds of beautifully set tables with the first course already on it called the “Last Of The Heirlooms.” It was a delicious tomato and plum salad that was topped off with balsamic jellies, basil, and quinoa. 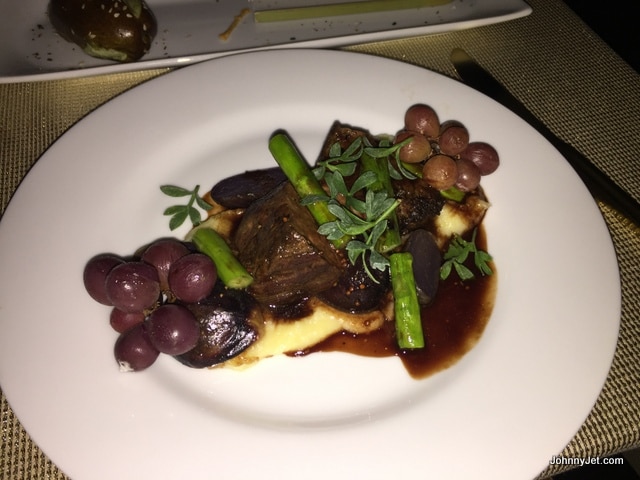 The three-course meal was catered by Patina and was surprisingly really good considering they had about 8,000 guests. I read there were 200 chefs, 600 servers and 25,000 bottles of wine. The main course was filet mignon, fish or a vegetarian dish. 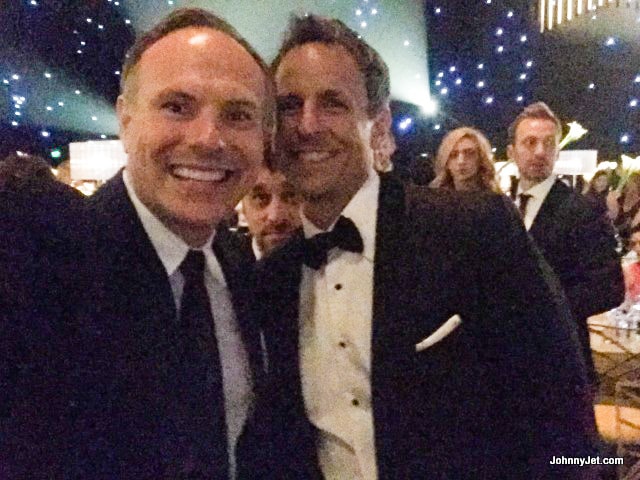 I was shocked that all the big stars were there, too. The table across from mine had Seth Meyers and when I went to use the bathroom, I washed my hands next to Louie Anderson and Zach Galifianakis (I would never have recognized him if Louie didn’t call him out). 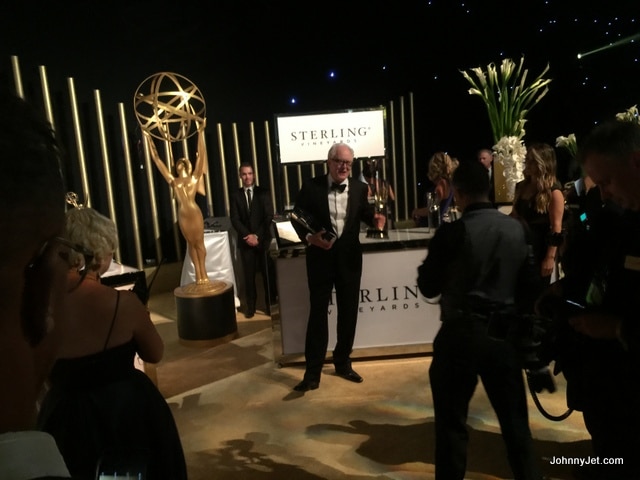 Our reserved table at the Governors Ball was stationed near the engraving station, which is where the winners took their statues to get their names, well, engraved. I saw John Lithgow, Donny Glover and Sterling K. Brown all get theirs engraved. 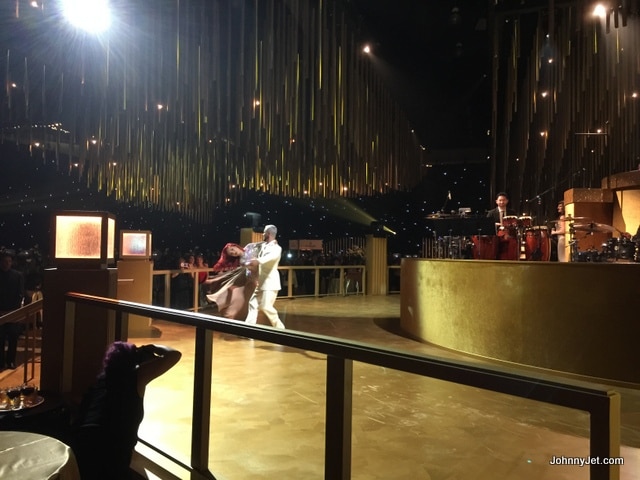 The Governors Ball has world class performers too like legendary vocalist Philip Bailey from Earth, Wind and Fire and the Scott Mayo Collective Band. They also had Dancing with the Stars’ Artem Chigvintsev ballroom dancing.

It was a long but incredibly fun and memorable night. If you’re interested in going to next year’s Emmys and you don’t have a Hollywood in, then consider getting the Chase Sapphire card. Heck, I have the Chase Sapphire Preferred card for all its travel perks and didn’t even know about their exclusive cardmembers event perks. I’m glad I know now for next year!