How to Prevent Sharks From Biting You 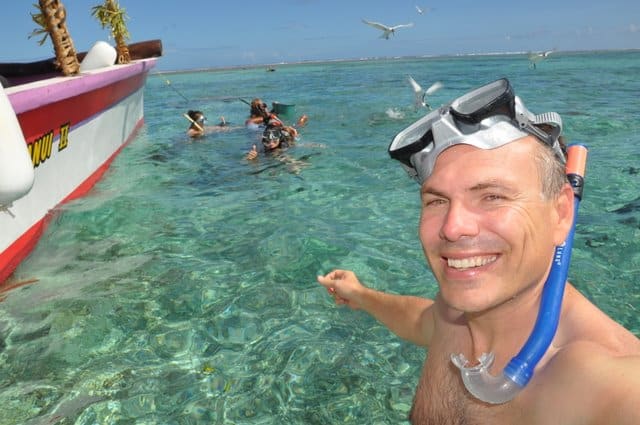 Fortunately, I’ve conquered that fear for the most part, as I’ve swam with sharks in Tahiti and Australia. However, when I see a baby shark when I wade into the water in Southern California, I make a quick U-turn. If you swim in the ocean, you’ll want to check out this new $84 wristband that made the news this week because Mark Zuckerberg, the CEO of Facebook, was spotted wearing a Sharkbanz.

Sharkbanz is a magnetic shark repellent band for swimming, surfing, diving, snorkeling and other ocean sports.

According to TMZ, “Mark Zuckerberg not taking any chances sharing the ocean with sharks … because he’s hooked himself up to a contraption that supposedly keeps them at bay. Mark was out on his hydrofoil surfboard in Kauai, Hawaii Thursday, wearing an ankle bracelet called Sharkbanz. The promise is that sharks don’t like what it emits, so they stay clear of surfers. The device sends out an electrical current that apparently drives sharks away.”

Zuck isn’t the only famous person that wears one. Former President Barack Obama wore one on his ankle while on a SUP on Oahu.

According to the Sharkbanz website, “Sharkbanz’s patented magnetic technology is the result of long term, ongoing scientific studies and testing. Sharkbanz utilize powerful permanent magnets to create an effective shark deterrent that’s always on and requires no batteries or charging. When sharks approach Sharkbanz, they detect the device’s strong electromagnetic field, which provides a sudden sensation that is thousands of times stronger than the signal produced by anything in a shark’s normal food chain. Consequently, sharks are deterred away from Sharkbanz. This cause and effect is analogous to having a bright light suddenly shined in your eyes in a dark room. You would not be hurt, but you would want to turn away.”

A couple of weeks ago, I linked to a news story that said “sharks use Earth’s magnetic field to navigate the seas.” The study suggested that “some sharks can read Earth’s field like a map and use it to navigate the open seas. The result adds sharks to the long list of animals—including birds, sea turtles, and lobsters—that navigate with a mysterious magnetic sense.”

Even if you’re not a surfer but swim in the ocean on vacation, Sharkbanz can be helpful. For $84, I’ll take that peace of mind. How about you? Buy Sharkbanz here on Amazon. UPDATE: Unfortunately, I couple of readers just emailed me to let me know the Sharkbanz doesn’t work. See comment and video below. That’s really disappointing. I guess I will just continue to hear “Duunn Dunnn… Duuuunnn Duun… Duuunnnnnnnn.”

2 Comments On "How to Prevent Sharks From Biting You"