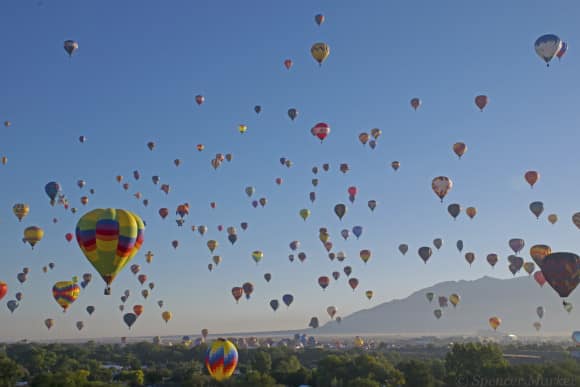 I was lucky enough to attend the 2015 Albuquerque Balloon Fiesta with my boyfriend on our final stop of our great roadtrip in my little MINI Convertible. Each year, balloonists from all over the world—as far as Belgium and Russia—make the trek to the New Mexico desert to participate in the festivities. This year, over 500 balloons participated and on a given day, up to 100,000 visitors were given the rare opportunity to walk amongst the balloons as they drifted quietly upward. It was quite unlike anything else I’ve experienced!

Sid would subsequently be known as the “Father of Ballooning” in Albuquerque, and he now has a statue in his honor at Balloon Fiesta Park. Since its first year, the Fiesta has continued to grow and is a staple event, contributing over $117 million to the local economy.

What to see and do
There’s so very much to see and do, from local dining establishments (Check out Blake’s Lotaburger and get their Hatch Valley Green Chiles on everything! Spicy!) to crafts created by local artisans. Local pieces are handmade and feature balloon-inspired images. We particularly enjoyed Ariel Greeley and her collection of handmade balloon jewelry.

The true highlight, however, is the interaction with the balloons. The schedule allowed us a unique perspective into this tranquil form of aviation. Plus, people are encouraged to walk on the balloon field and interact with the pilots and crews as they prepare for launch. Here are the best things to do at the Albuquerque Balloon Fiesta:

1. The Dawn Patrol
There is a real beauty in watching these brightly colored bags of air rising from the surface into the pre-dawn darkness, but the festival’s Dawn Patrol balloonists actually have a very practical purpose. This first, small wave of balloons actually provides a way for other balloonists on the ground to observe the wind before all the balloons go up in the air. As they float, pilots observe the wind direction and speeds at different altitudes. This aids the other balloonists plan their flights during the Mass Ascension (see below). If the winds are too strong, they could affect the decision to fly at all.

Tip: GET THERE EARLY. The Dawn Patrol launches at 6 am sharp. This means in order to weave our way through traffic, we had to arrive at roughly 4:15 am. Yep: Those of you that know me understand that this was a struggle and copious amounts of coffee needed to be consumed.

The Dawn Patrol presents a unique opportunity to view balloons at dark and as the sun comes up. Fiesta-goers are given some beautiful views and even better photos! The brightly colored envelopes create stunning contrast against the faint light peeking over the Sandia Mountains. Be sure to bundle up, though! October temperatures for the Dawn Patrol can range from 20-40º Fahrenheit! However, it was all very worth it.

2. The Mass Ascension
The Albuquerque Balloon Fiesta is heralded as “The Most Photographed Event in the World,” and for good reason. Nowhere else is the contrast so spectacular and are the colors so vivid set against the sapphire backdrop of a New Mexico sky. And perhaps the hallmark event of the whole festival for photographers is the morning Mass Ascension.

Tip: If visiting for several days, try to purchase a ride in a balloon participating in the Mass Ascension. The views are breathtaking and seeing that many balloons together truly is a once-in-a-lifetime experience.

The Mass Ascension spectacle involves the release of the entire field of balloons in two huge waves. The experience itself can last more than two hours as it takes a lot of time to get all 500+ balloons into the air. As they do during the rest of the event, visitors have the opportunity to walk amongst the balloons and get an up-close-and-personal look at how they are unpacked, inflated and silently launched. On days on which the winds are favorable, most balloons stay close to the field and continue to provide patrons with great views of the hundreds upon hundreds of balloons floating gracefully in the sky.

We were extremely fortunate to view the Mass Ascension from both the ground and in the basket of an early launch balloon. This is a must-do for any photographer looking to capture the Fiesta from a more unique perspective. Also, it allowed us to take in the immense size and the full scope of the festival. Nothing quite like seeing 500 balloons and many thousands of people all at once! Our flight is now a memory that my boyfriend and I will cherish forever.

3. The Balloon Glow
There are two main balloon events: one in the morning, and one in the evening. That isn’t to say that there aren’t tons of things to do in the between time. But most of the balloons are packed up after the Mass Ascension and don’t return to the park until the evening, when the field plays host to another breathtaking spectacle: the Balloon Glow.

Just before sunset, participating balloons are set out and inflated while tethered to the ground. Then, at coordinated times, the balloonists will collectively fire their burners, illuminating the envelopes from within and putting on a striking display of color. We even saw one little girl lucky enough to pull the handle to fire a burner, lighting up the balloon, surrounding guests and her smiling parents!

The event continues well into dark, so we had to make use of our tripod to capture the photos we were hoping to get. Still, the results were spectacular. Event organizers put on special Balloon Glows at different times during the week. Our favorite was the Special Shape Glowdeo, which featured balloons that are odd or unique shapes! Who knew balloons could come in shapes like an astronaut and a turtle? Given the recent Star Wars hysteria, we were glad to see that even Darth Vader and Yoda paid the event a visit. A beautiful display of fireworks ended the night.

5. Interactive exhibits
The Balloon Discovery Center is a great spot to learn about ballooning and how organizations like NASA use them to make observations about the weather and the world around us. There are also tons of interactive exhibits for the whole family.

Our final destination: Albuquerque KOA
Switching gears a bit to the hotel situation…or lack thereof! Good luck trying to find a hotel near the Fiesta. My advice is to plan well ahead of time. We managed to find a great alternative to a hotel in the KOA.


Twenty minutes’ drive time from the Balloon Fiesta Park is the Albuquerque KOA. We were so lucky to find availability here, since most of the hotels closer to the festivities were booked up (we booked about a month in advance). We picked Albuquerque KOA as headquarters for our time in New Mexico because of its affordability, access to the interstate and location near some of Albuquerque’s best attractions.

We arrived to the KOA after 9 pm. Lucky for us, after-hours check-in was a snap and we quickly found our two-room camping cabin. This style of cabin is great for roadtrips and a good value for families. It does sleep six after all!

Parking the MINI out front, we made our way inside our miniature log cabin to find the first bedroom, complete with full bed and television. Further back, the rear bedroom contained two sets of bunkbeds that would be great for children (we used them as our storage space for our luggage). Also, there was a mini fridge that we made great use of during our time exploring Albuquerque. I was prepared for the ultimate camping experience but thankfully the cabin included heat and A/C. A charcoal grill, firepit and picnic table accompanies each unit, and a little patio with a porch swing outside rounds out the rustic charm.

The only thing this place didn’t have was a bathroom and shower inside our cabin. Both were located nearby at several sites on the campground (be sure to bring flip-flops for the walk). This was okay by me since we were fortunate to find any availability at the KOA and the event keeps everything pretty packed.

The cabins also did not come with sheets or towels, which we were aware of and KOA makes clear on their website before booking. We simply packed our own, which makes this option better for folks arriving by car than by plane. While not as convenient as our cabin in the Grand Canyon, the affordability of the cabin at Albuquerque KOA more than makes up for it. Plus, who doesn’t like to rough it a little?

Tip: Albuquerque KOA also offers deluxe cabins, similar to the one we used in the Grand Canyon, if you don’t really feel like roughing it!

Other amenities offered to guests of the campground include a pool and a hot tub, along with a playground for the little ones. A mini golf course is also located on site. For pet parents, a dog park, otherwise known as a “Kamp K9 Pet Playground,” is available for your dogs to go off leash and socialize. It also provides campers with pets a great way to meet other travelers! The campground includes all the other things travelers have come to expect from KOA over the years, including water and electric hookup for RVs, propane fill-up and tent camping sites.

The KOA’s location also makes it a perfect spot to start a tour of the Turquoise Trail National Scenic Byway by car. This popular daytrip begins just east of ABQ off I-40, then veers north on NM-14 east of the Sandia Mountains. You’ll enjoy breathtaking panoramic views and visit some historic Turquoise mining towns as you wind your way to Santa Fe. Locals highly recommended the drive. For science buffs (like my boyfriend), the KOA is five minutes up the road from the National Museum of Nuclear Science and History. The museum covers everything from the development of the atomic bomb in New Mexico to civilian nuclear power. Its collection of aircraft and missiles from the Cold War era makes this stop a can’t-miss for anyone interested in science or history.

There’s so much to see in the city and the Albuquerque KOA puts you within an arm’s reach of it all. The friendly staff and the close proximity to the balloon festivities made KOA a perfect place to stay during for our very first Albuquerque Balloon Fiesta.

A two-room cabin at Albuquerque KOA starts at $69/night. 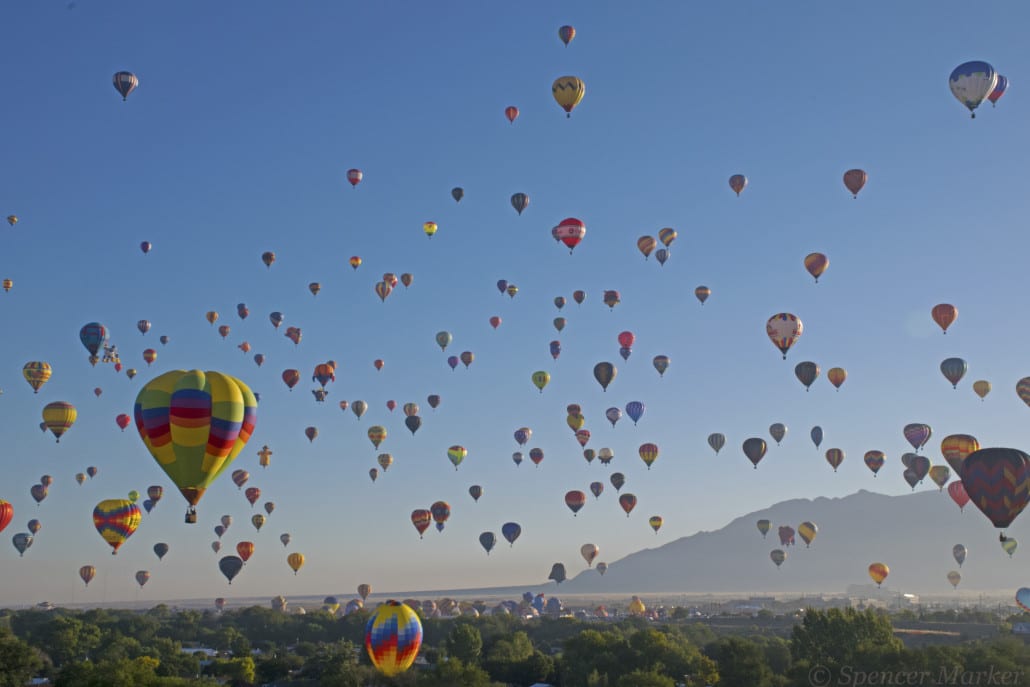 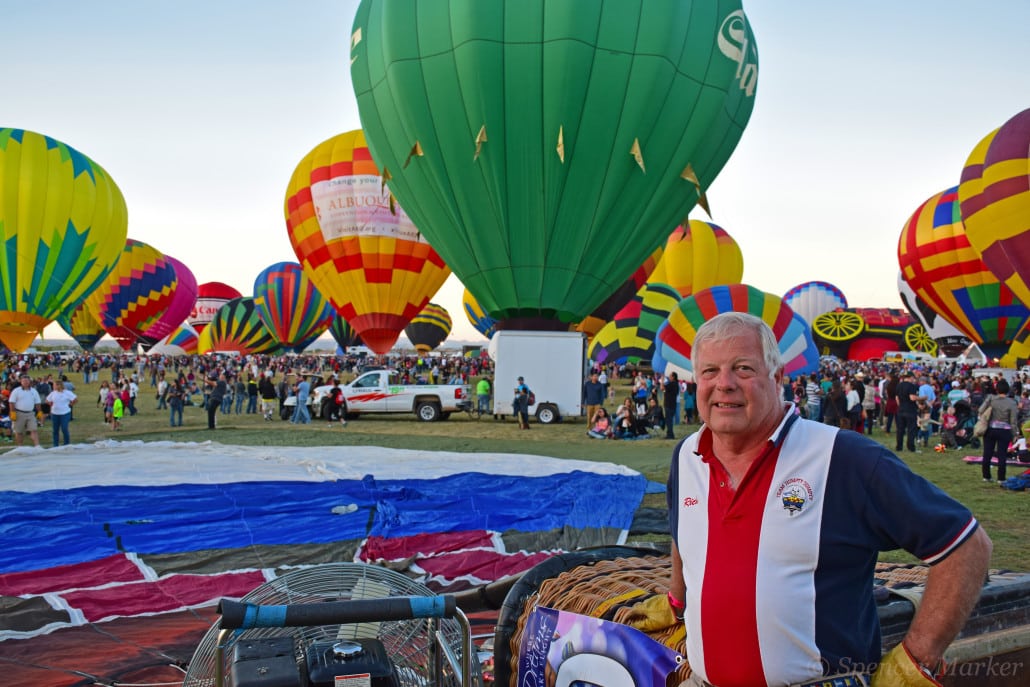 Balloons in the back 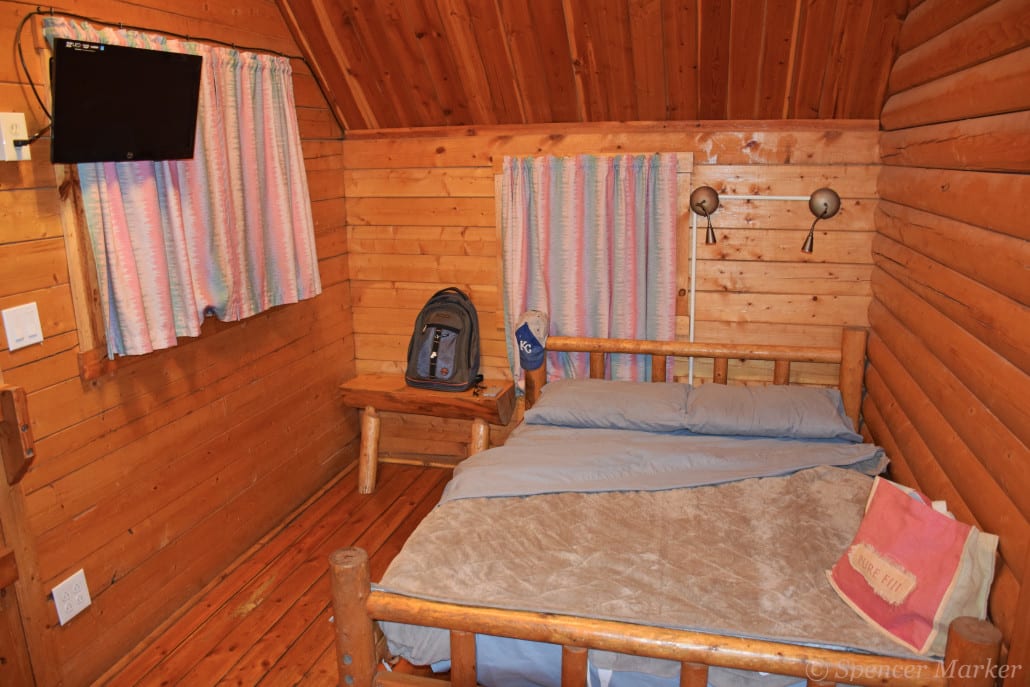 Inside the KOA cabin 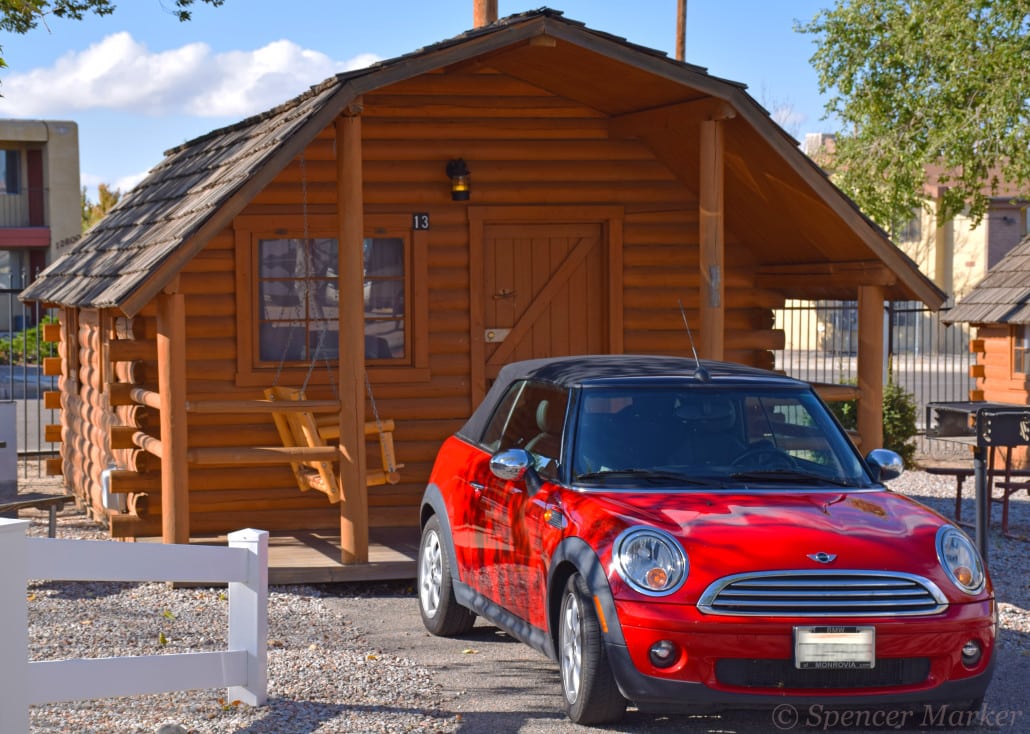 Our cabin at Albuquerque KOA 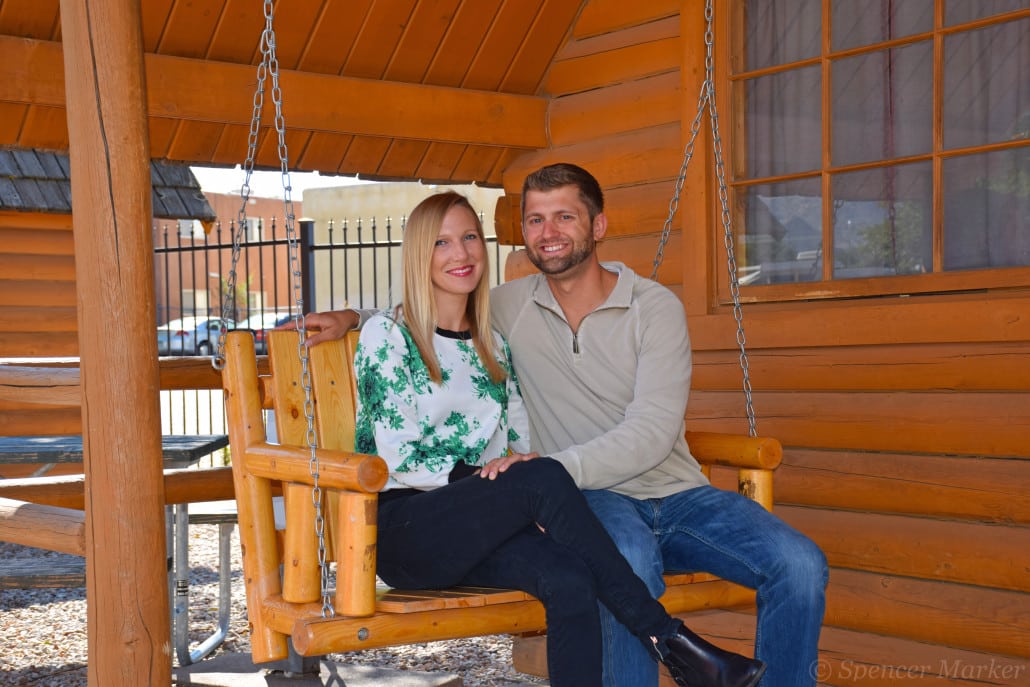 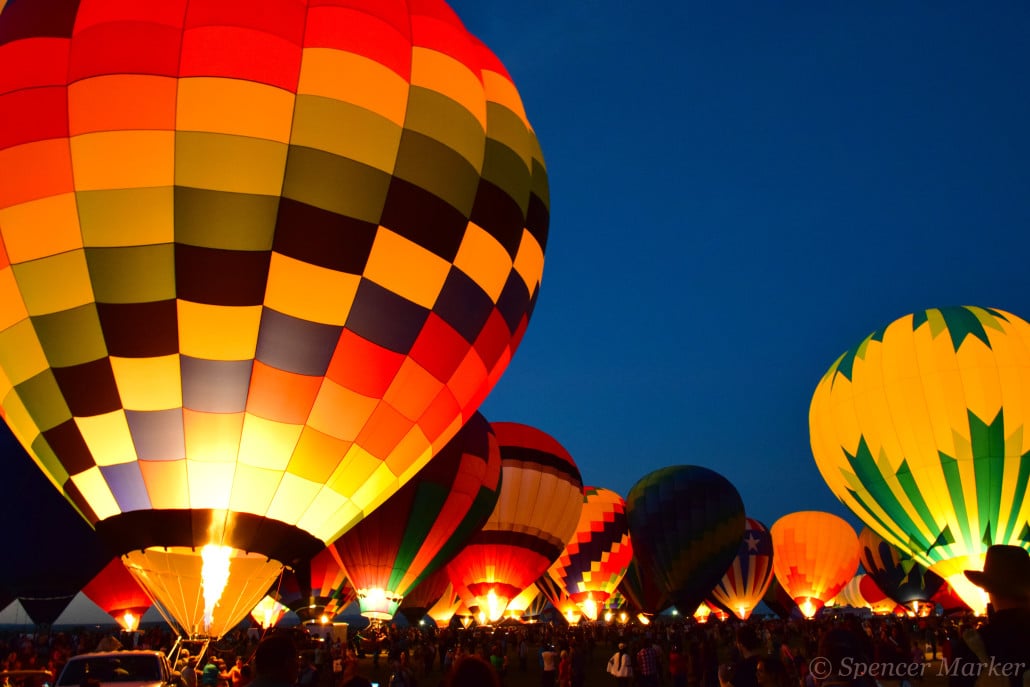 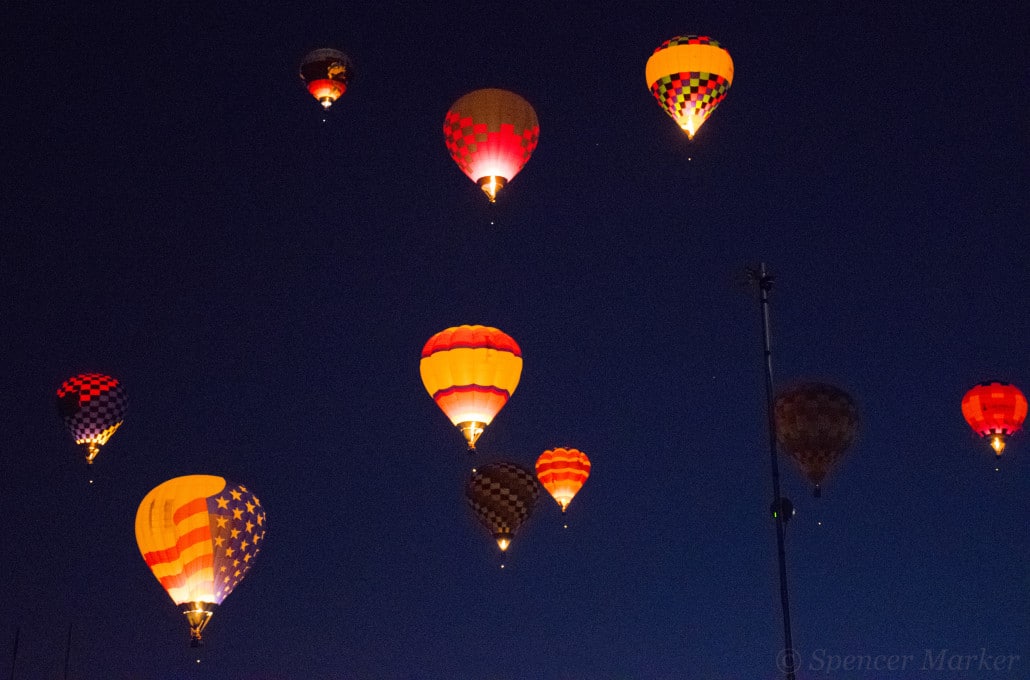 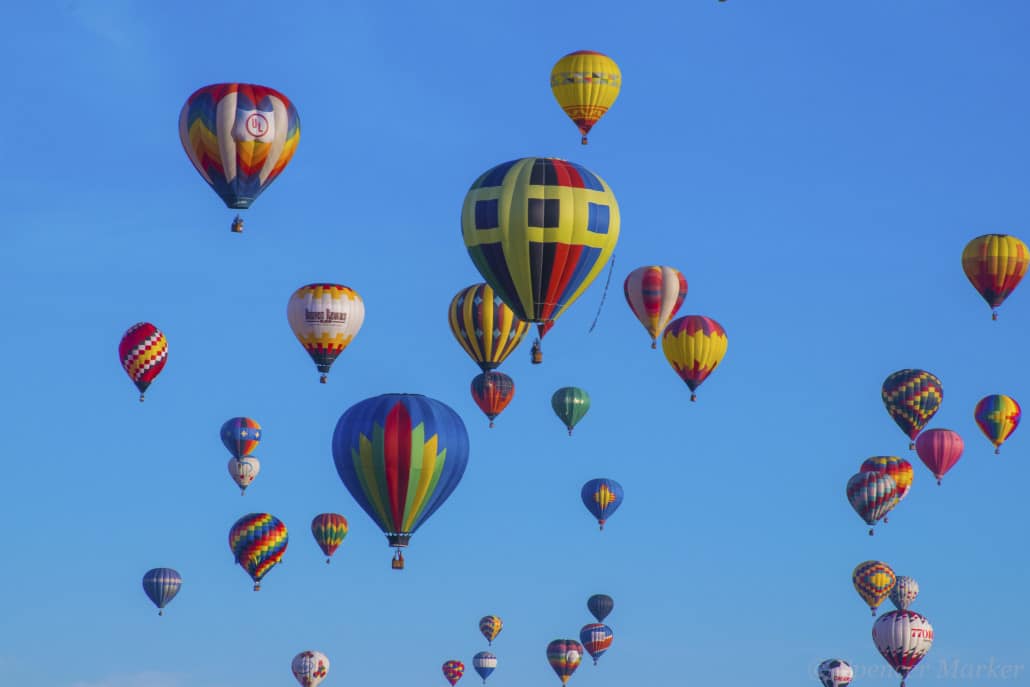 Balloon takes to the skies 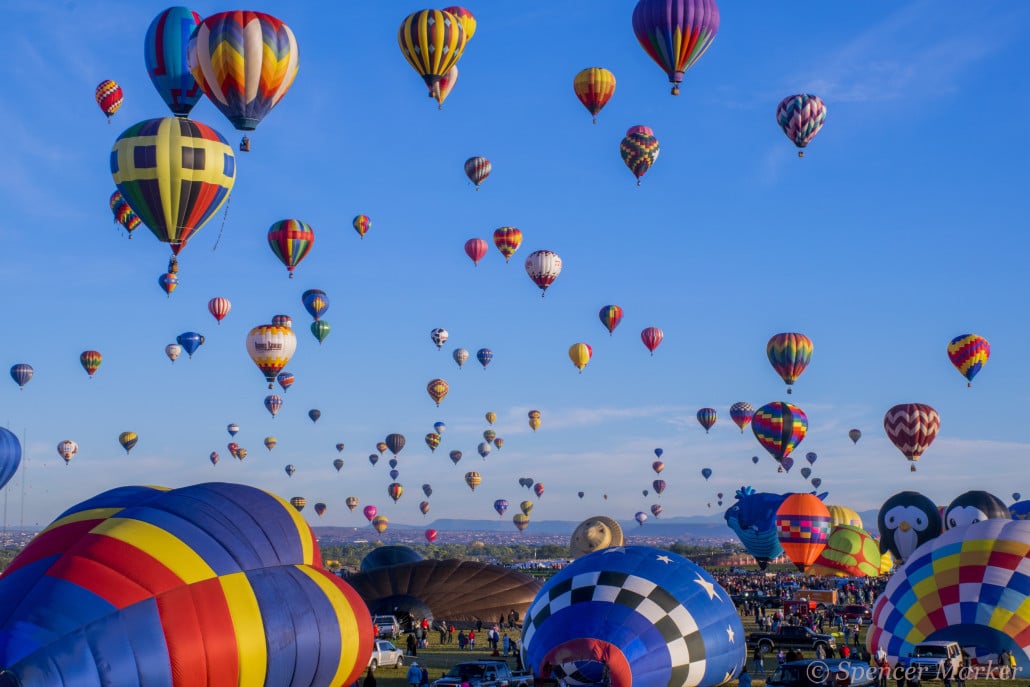 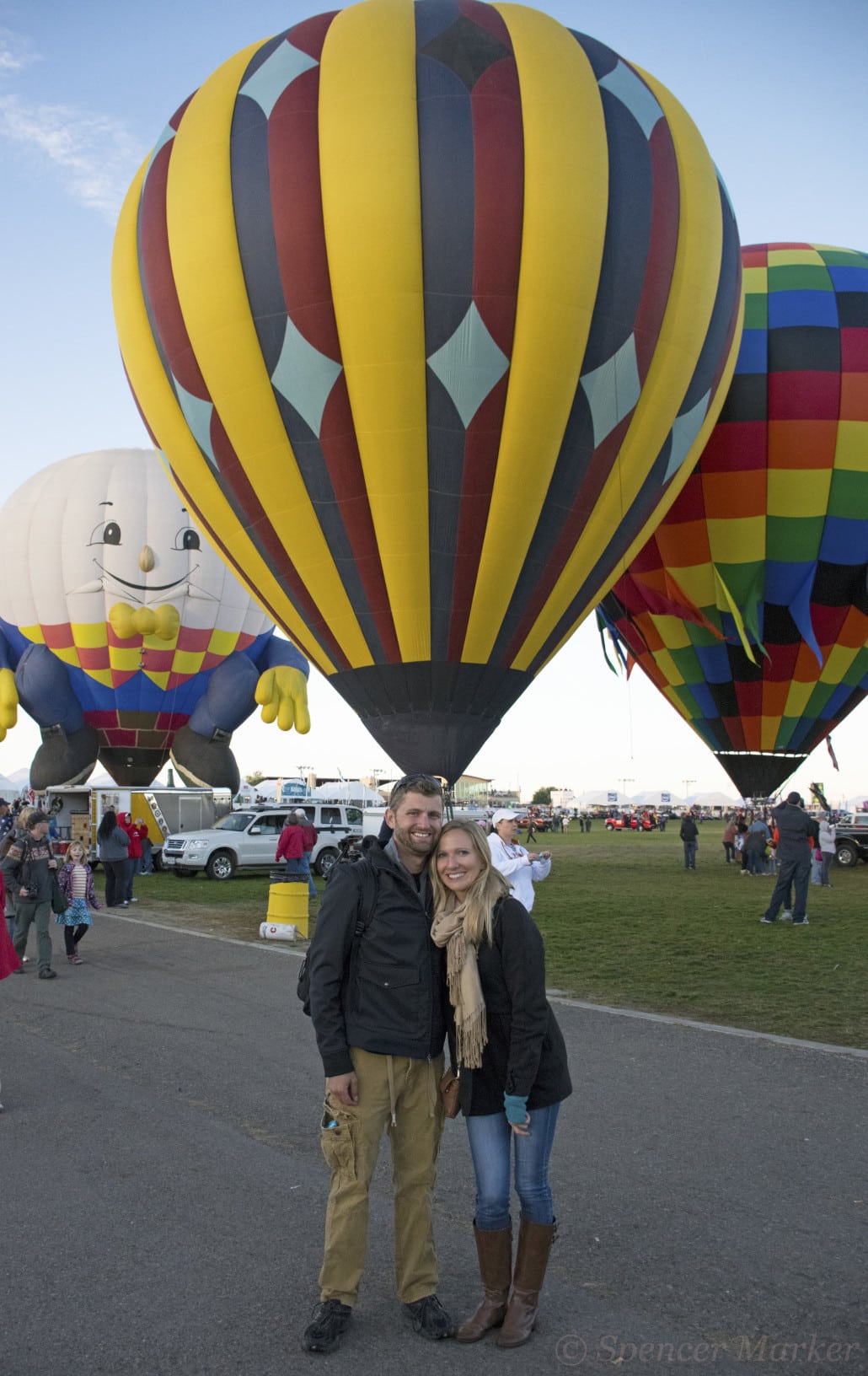 In front of balloons 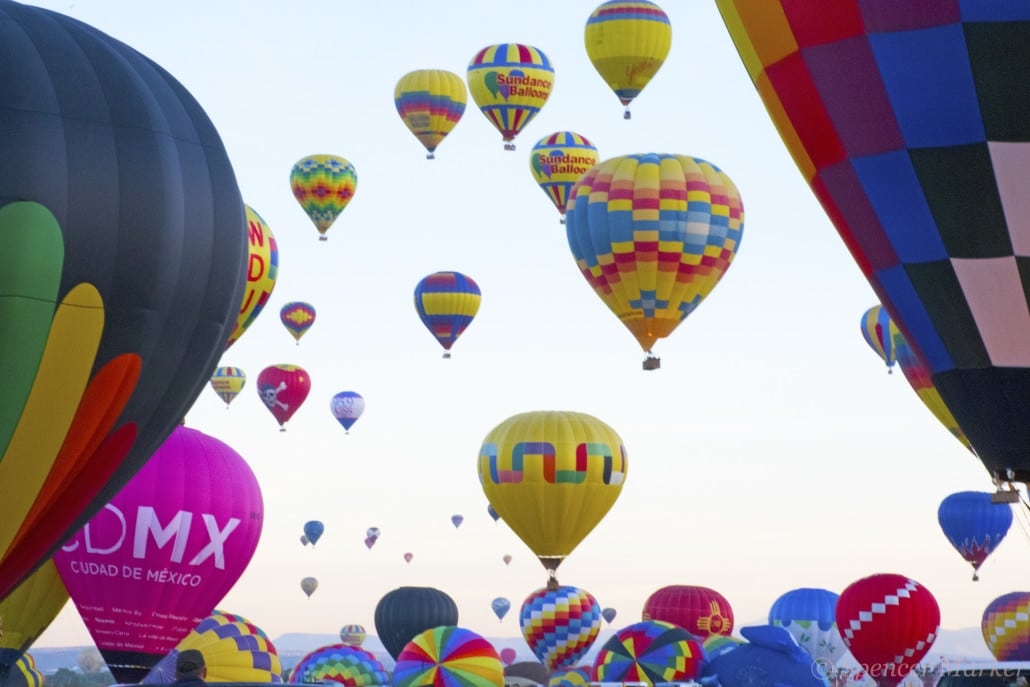 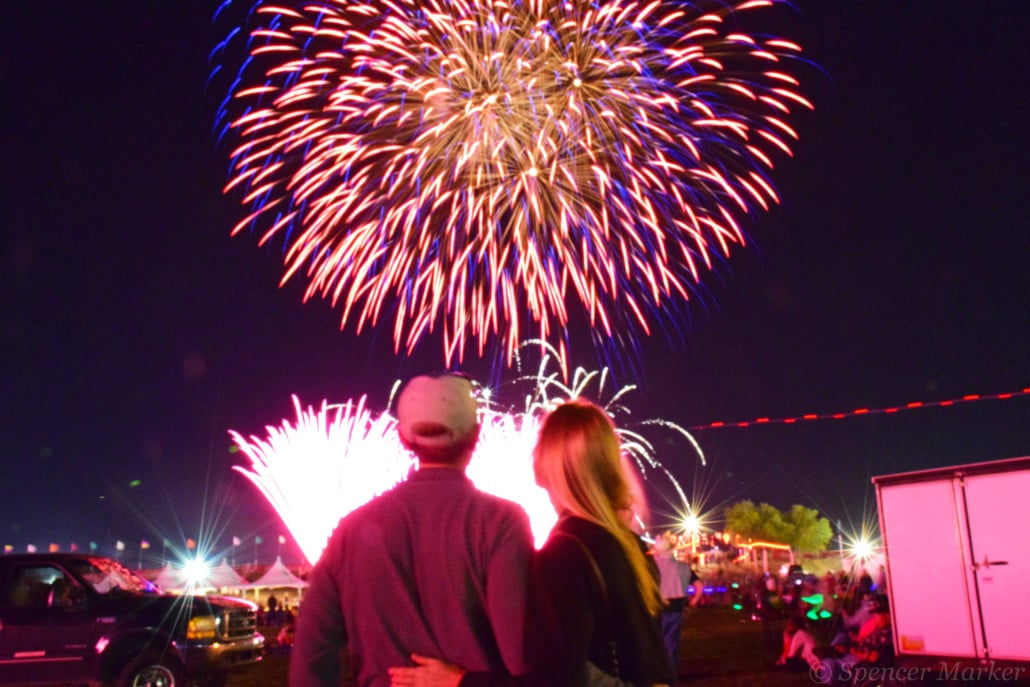