Is a Mobile Safari in Botswana Right for You?

Africa is a diverse continent. In the category of major deserts alone, you have the Sahara, the Namib, and the Kalahari. If deserts aren’t your thing, there are the great plains of the Serengeti in Tanzania and the Masai Mara in Kenya, the rolling hills of Uganda, and the lakes in Rwanda. There’s a lot to choose from.

There are over 50 countries in Africa and each offers a unique experience (see: In Defense of Travel to Africa), and Botswana is no exception. Safari, of course, is a huge draw in Botswana. Some years ago, I met Brent and Grant Reed at a travel convention in Vancouver. They run Letaka Safaris, a company that specializes in mobile safaris in Botswana and they suggested I might want to try that approach. In February of this year, I took them up on their offer and booked a Letaka mobile safari.

Overall, the experience was very different than my safari through Uganda and Rwanda a year ago. On that trip, I stayed in middle-range and upscale lodges. On this trip, I slept in a tent with a “long drop” toilet and a “bush shower.” On the Uganda/Rwanda trip, I saw mountain gorillas, chimps, and monkeys. In Botswana I saw lions, leopards, and elephants.

So was it better? Was it worthwhile? That depends on what you’re looking for… 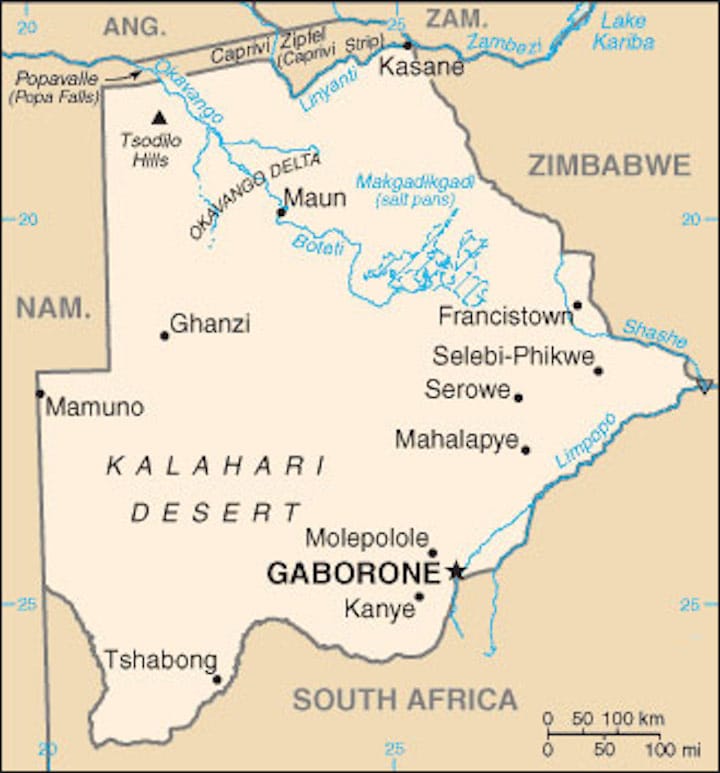 Botswana basics
I have to confess that although I’m a fairly experienced traveler and I’ve been to Africa four times, I only had a vague idea of where Botswana before this trip. I knew it was somewhere near South Africa and not much more. My first order of business was to find out exactly where Botswana is situated. I figured it was one of those countries that used to be called something else, so I Googled it. It turns out that it was once called Bechuanaland, which didn’t help me much.

Botswana sits on top of South Africa and is surrounded by Angola, Zambia, and Namibia. It includes part of the Kalahari Desert, and it was considered one of the poorest countries in Africa until diamonds were discovered in 1955. It now sports the largest diamond mine in the world, and the economy is doing just fine. It has a very small population with only 2.2 million people, half of whom are basically children (the average age is only 25). Botswana became independent of Great Britain in 1966.

The cost: low
Botswana tourism tends to cater to an upscale market, promising personalization, sustainability, conservation, luxury, and small crowds—which generally translates to expensive. You’re generally looking at $1,000 or more, per person per night, for a lodge safari in Botswana. Comparatively, my mobile tenting experience ran $500 per person (not double occupancy, when space is available). That’s quite a difference. 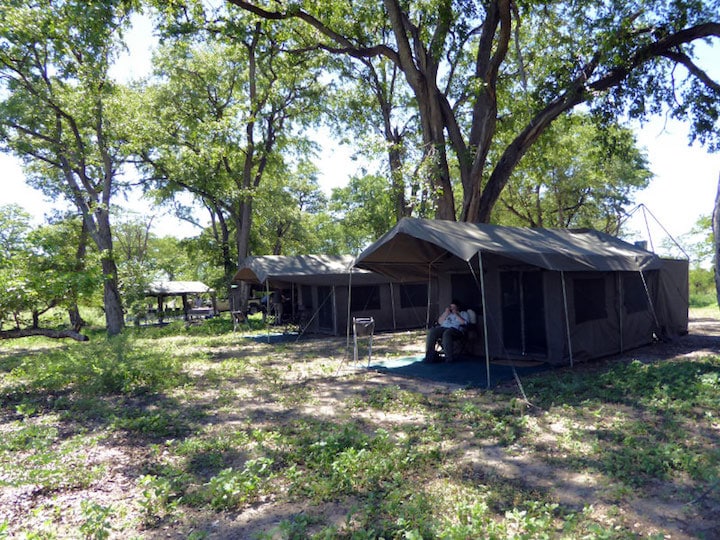 The accommodations: like camping, basically, with service
There are some major trade-offs with mobile tenting, the main one being the quality of the accommodations. It’s basic camping, really, so you have a relatively large (you can stand up and walk around in it) tent, a comfortable bed and…well, that’s basically it. You have your own outdoor washroom attached to the back of the tent that comprises a “long drop” toilet (basically a pit toilet with a seat and cover), a bush shower consisting of a galvanized pail with a shower head, and a canvas sink. When you move to the next safari site, the camp moves with you. 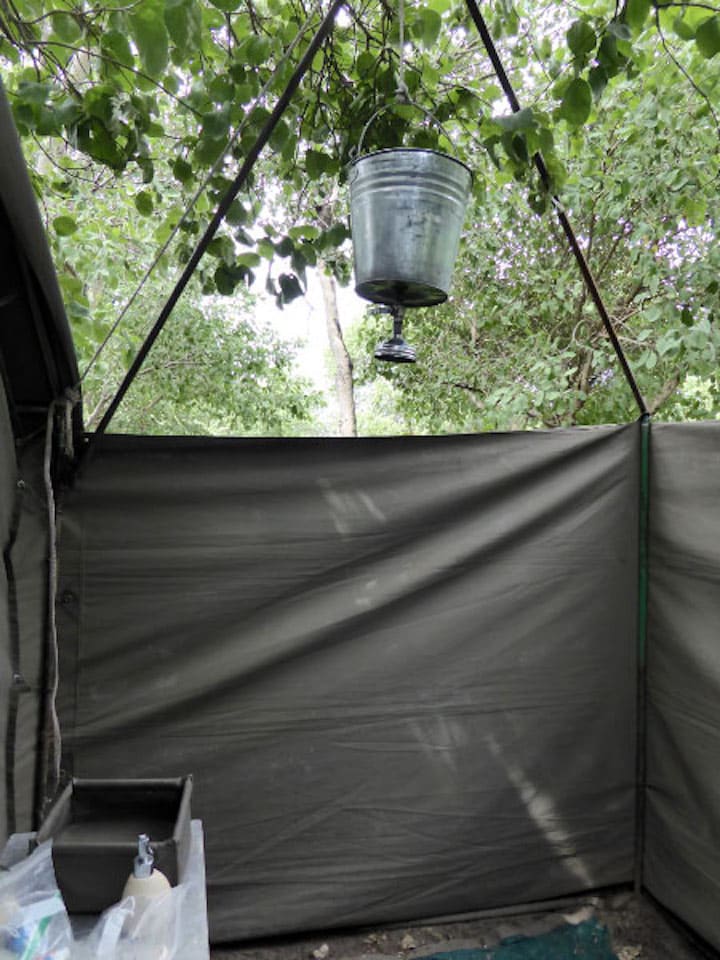 You don’t have to worry about doing any of the striking or setting up. There’s a team that sets up the camp, cooks your food, does the dishes, and makes your bed each morning. They will also do your laundry (not underwear or socks) for free. The meals were quite good considering that they had to be cooked over a campfire or in a bush oven, and were even quite varied and balanced. And with Letaka Safaris, all beverages are included. You just have to let them know in advance what your preferences are. On my trip, the Brits had their G&Ts, the Germans had their schnapps, and it was beer for me. All of us had wine with dinner (very civilized). 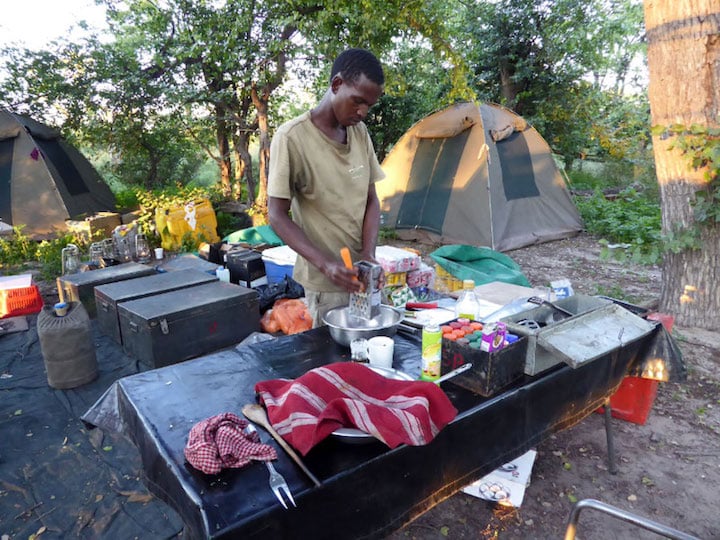 My group consisted of two couples and three single travelers: three Germans, three Brits and a Canadian (me). All of us had traveled in Africa before. The three singles each had their own tents. At the start of the trip, about half the group was put off by the “basic” accommodations, which weren’t quite what their travel agents had described. But as they were all experienced travelers, no one made a fuss. And by the end of the safari, everyone felt that they’ gotten their money’s worth.

The travel time: there’s a lot of it
The other big trade-off is the travel time that’s required to move between camps. With a higher-end lodge safari, you travel to and from camps by aircraft. On my mobile tenting safari, we drove…and drove…and drove…often five or more hours over some of the world’s worst roads (especially in the wet season). There are opportunities to see game during these drives, but they’re not prime game-viewing areas. Also, if it’s raining, since you’re traveling in open vehicles, you’re going to get wet. 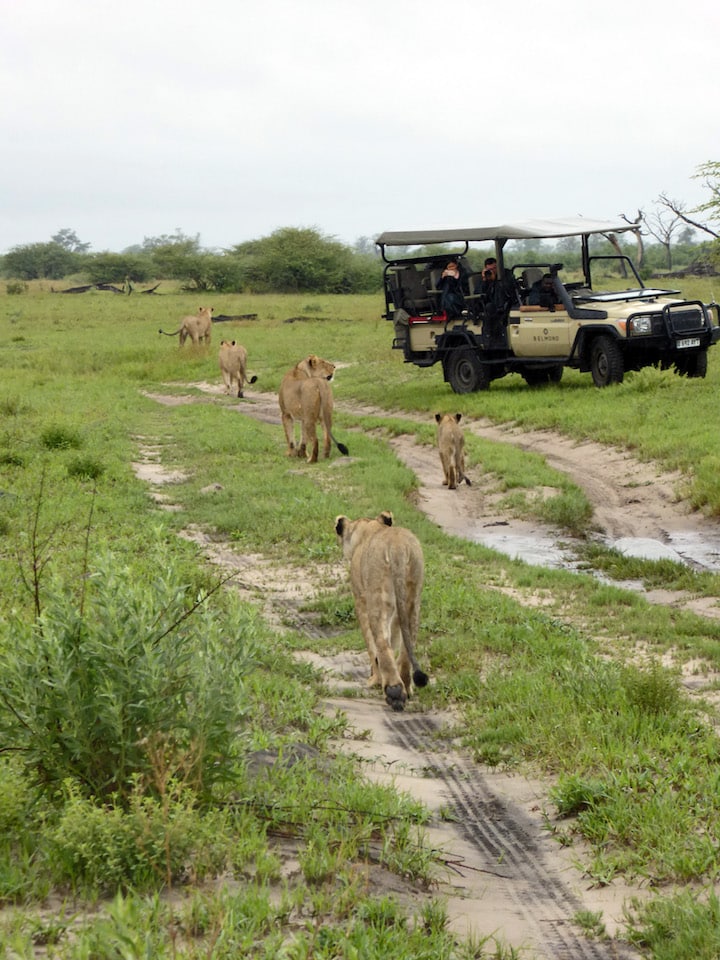 The game drives: as good as any
Having met and talked to other safari travelers in Botswana, I’ve come to the conclusion that the actual game drives are pretty much of the same quality as what you get with an upscale lodge. All of my guides seemed capable and knowledgeable, and the vehicles, in my experience and in what I heard, are the same across all safari experiences (almost all are Toyota Land Cruisers). Most of the guides, regardless of which company they’re working for, share information by radio, so guests of different accommodations are pretty much guaranteed to see the same things in the same area. 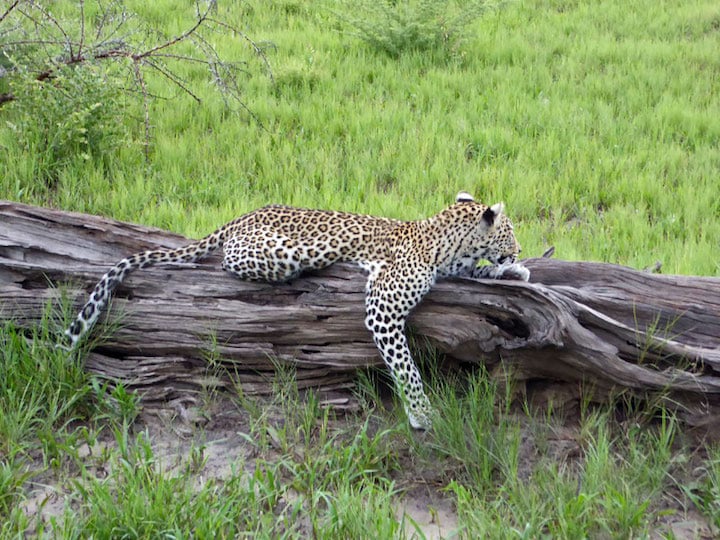 Overall
Would I recommend a mobile safari? That depends; they’re not for everybody. If you like camping, want to avoid large crowds, and are traveling on a budget, then you’d probably like a mobile safari. If you want a few more creature comforts, you have two choices: You can pay at least double for the high-end lodge experience in Botswana, or you could consider such a safari in another country like Kenya, Tanzania or South Africa that offers a lodge experience for roughly the same price per person (based on double occupancy). The major trade-off in those countries, at least in most cases, is that you usually travel in much larger groups and the parks tend to get quite crowded (sometimes 15 vehicles or more surrounding one animal).

The best advice I can give you is to do some basic research and find a qualified travel agent that specializes in Africa. Be up front with what your budget and time restraints are. In my early days, I tried to do all my own booking—and then then I found out that a knowledgeable travel agent could put the whole trip together better and for less than I could. There are several good ones out there. I’ve used for my last four trips and been very happy with them.

Whatever choice you make, I know you’re going to love Botswana. Here are 14 more things to know before you go.

2 Comments On "Is a Mobile Safari in Botswana Right for You?"